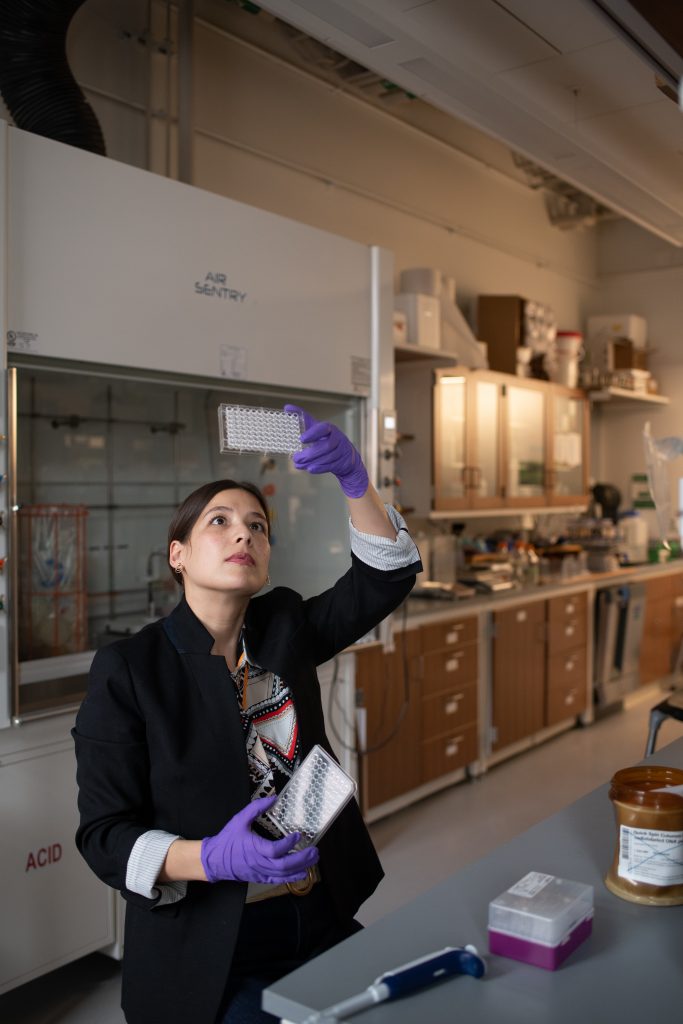 Antibiotic resistance is nearly as old as antibiotics themselves. Not long after penicillin became widely used in the 1940s, an enzyme called TEM showed up and started destroying its structure on the molecular level, thus inactivating it. In response, scientists came up with new antibiotics. And in response to that, the enzyme adapted. Today, scientists know of more than 200 different versions of TEM—a number that Assistant Professor of Chemistry Katie Hart says is constantly increasing—along with a host of related enzymes that also degrade the effectiveness of antibiotics.

Hart, a biochemist who recently received a three-year, $378,000 grant from the National Institutes for Health to study the structural components of these enzymes, says there’s a mantra in biology: Form underlies function. “The way something looks is critical to what it’s able to do,” she says. “But the structure of these molecules is also critical to understanding the ways in which they can evolve—and their ability to evolve so quickly is what makes them so dangerous.”

Drug resistance depends on a small number of mutations that result in changes to an enzyme’s amino acid sequence. Hart says that by investigating how these changes affect the enzyme’s structure, stability and function, she may be able to find insights to inform the design and implementation of new drug treatments.

Hart studied the evolution of other kinds of enzymes in graduate school and later held a research position at the medical school at Washington University in St. Louis, where she applied her training to questions in human health. At Williams, she was eager to continue with that work, and so, with her thesis students, she decided to investigate antibiotic resistance.
She started by comparing TEM with another enzyme that has the same effect on antibiotics but is different in several important ways. “We found that the structures the enzyme adopted weren’t at all what we expected,” Hart says. “The question then became, what is it about the chemical composition of this enzyme that allows it to adopt these unusual structures?”

Her project is always evolving, too. “The best thing that can happen in science is that you end up with a more refined hypothesis, one that has more refined questions,” Hart says. Her current thesis students, Drew Cohen ’20 and Ryan Rilinger ’20, are building on the work of her earlier thesis students, refining questions and collecting data.

“As a graduate of another small liberal arts college, I can say that places like Williams enable excellent teaching in the classroom and cutting-edge research at the bench,” says Hart, an alumna of Haverford College.

Rilinger agrees, adding, “Our work has the potential to help future researchers develop new ways to combat antibiotic-resistant bacteria. It’s an incredible experience to ask and answer previously unanswered questions about something so relevant.” —Julia Munemo