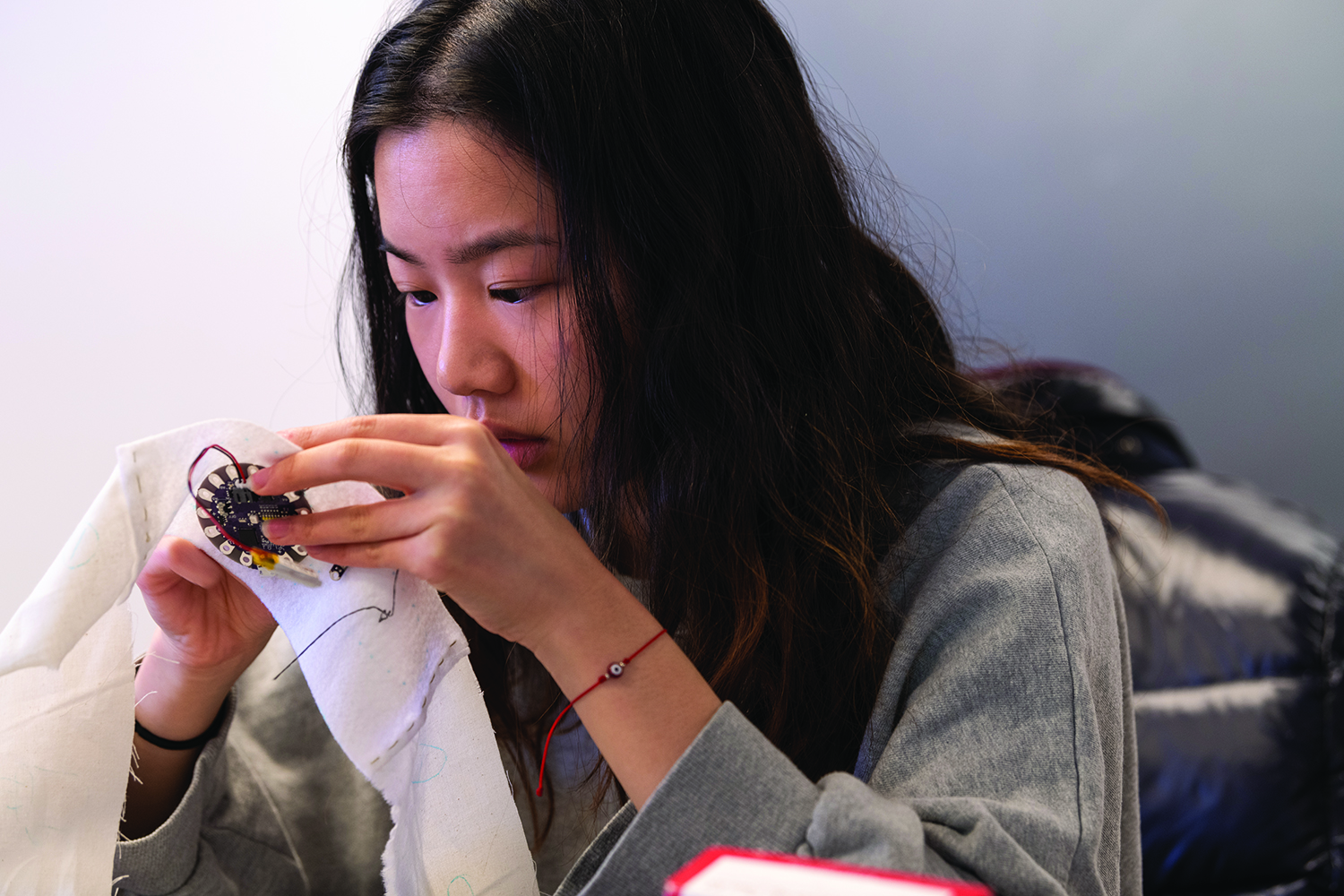 “Digital data is being infused throughout the entire physical world, escaping the computer monitor and spreading to other devices and appliances, including the human body,” Assistant Professor of Computer Science Iris Howley writes in the description for Electronic Textiles, a new course she taught in the fall. The course had students stitching together coding skills with basic (and not so basic) sewing skills for a final project that can be worn as clothing.

“We already have wearable tech in some niche markets, like a bicycling jacket that, when you press a button on your sleeve, lights up a turn signal on your back,” Howley says. “Fifty years from now, people won’t use Fitbits, because their fabric will provide personal analytics.”
Products involving wearable technology may seem straightforward—lights on a shirt that pulse to the beat of music, or a teddy bear that plays a song when its hands are pressed together. But the code required to program the tiny computer chips, as well as the sewing skills needed to embed those chips in fabric, are anything but simple. 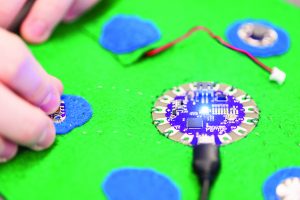 “You don’t need years of study to do what we do, but this type of coding requires that you think like a computer scientist,” says Howley, who designed the course for students who don’t yet have that background.

In an early project, students were asked to program a computer chip to send signals to three different lights, mimicking the behavior of fireflies from the Great Smoky Mountains. Each light had to blink in a different pattern. “This was a project about timing and simultaneity, which are important concepts in computer science,” Howley says.

She first got involved in wearable technology in graduate school at Carnegie Mellon University, when she partnered with a friend who was running an after-school program for girls in Pittsburgh. The girls were making plushies and wristbands, and Howley, who had been sewing since childhood, saw an opportunity to help them build on that skill. “Observing the girls sharing my own enthusiasm for making through computer programming motivated me to continue spreading knowledge of the technologies that combine the digital and physical,” she says.

Howley first came to Williams in 2017 and taught a Winter Study course on wearable technology for students with experience coding. She then developed the semester-long class for nonmajors. “It gives me an interesting framework through which to teach basic coding and other computer science skills, and it opens the discipline up to learners we don’t always see in this field,” she says.

Sebastian Job ’22 already knew how to sew when he signed up for Howley’s class; he learned to tailor his own pants as a teenager. He plans to major in sociology and says he was curious about the creative potential of programming. “A friend told me that CS is like painting,” says Job, who is now considering a computer science major as well. “You imagine something you want to create and then solve problems in order to create it.” Job’s final project was a holiday costume for his brother’s pug. The costume lights up and plays “Jingle Bells” when a button is pushed, and Job says the process of figuring out how to make it work was “challenging, but also really fun.” 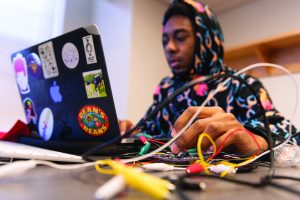 “Professor Howley fosters a sense of excitement about programming,” says Job, who is now taking Introduction to Computer Science, the gateway to the major.

Howley is thrilled to have nurtured curiosity in a student who hasn’t yet declared a major. “The more diverse opportunities you make available in computer science, the more diverse students you will attract,” says Howley, who was recently awarded a National Science Foundation grant to support her research into understanding artificial intelligence algorithms in educational technology.

“Williams is a great place to explore cross-disciplinary topics, both as an instructor and as a student,” Howley adds. “Electronic textiles started out as an experimental Winter Study course and now empowers students with a variety of backgrounds and interests to discover the creative core of computer science.” —Julia Munemo