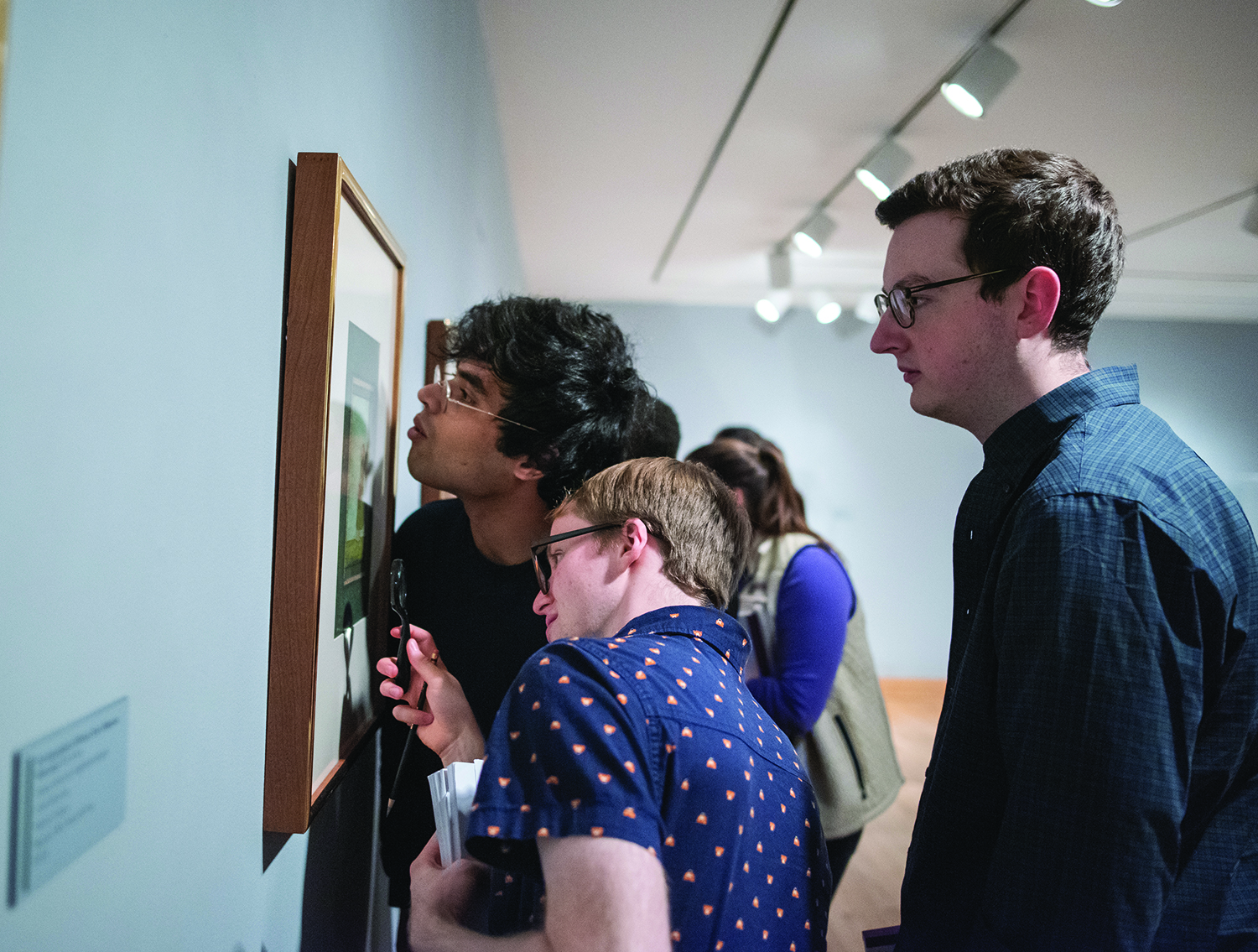 “You can see the individual hairs in his beard,” a student says, using a magnifying glass to study a 17th-century portrait of Mughal Emperor Shah Jahan that’s displayed on the wall of the Williams College Museum of Art (WCMA). “Yeah, and also shadows on his face!” says another.

Associate Professor of History Aparna Kapadia steps closer to the painting for a better look, while Assistant Professor of Art History Murad Mumtaz nods his head. “Exactly,” Mumtaz says. “These miniature portraits were intended to be recognizable, almost like photographs of the emperor. Now look at the rest of the folio and see if you can figure out how it was constructed.”

The 10 students are gathered with Kapadia and Mumtaz in the Object Lab, a hybrid gallery-classroom where faculty collaborate with museum staff to select works of art that investigate key course concepts.

Kapadia first developed a course on the Mughal Empire several years ago. When Mumtaz joined the faculty in 2018, and the two discovered their shared interest in the Muslim dynasty that ruled northern India for nearly three centuries, they decided to co-teach the class, now called Emperors of Heaven and Earth: Mughal Power and Art in India. Among the course’s central questions are how the Mughals sustained their empire for so long, how they used art and politics to rule over diverse and largely non-Muslim populations, and how Mughal culture continues to shape the South Asian imagination today.

According to the course description, “Mughal kings were globally viewed as political innovators and unprecedented patrons of art. Their visual practices were as much a part of their imperial ideologies as their administrative and military measures.” The most well-known example is the Taj Mahal, a mausoleum in Agra built by order of the Emperor Shah Jahan, whose portrait now hangs at WCMA. No bigger than an illustration in a textbook, the portrait likely was part of an album filled with similar Indian miniature paintings.

“Indian miniature painting is known for its degree of formalism and stateliness,” says Mumtaz, who also studies Sufi devotional portraiture and is a practicing painter himself. “For the Mughals, the image was central to political self-fashioning, and the collection of Indian miniature paintings at WCMA provides an excellent resource for our students to see the connections between the art and the history we’re learning about in class.”

In her sections of the course, Kapadia covers the life of Shah Jahan and other Mughal emperors, as well as the political and ideological mechanisms at work during their rule. “We wanted to introduce students to a multifaceted picture of one of the greatest empires in precolonial world history,” says Kapadia, whose research interests include the cultural and literary history of premodern and modern South Asia, as well as Indian regional traditions and the Indian Ocean.
Adds Mumtaz: “Another goal was to familiarize students with a wide range of visual and written primary sources and to help them develop a vocabulary for ‘reading’ those.”

Back in the Object Lab, Mumtaz smiles when the students compare the border around the portrait of Shah Jahan to a collage. “We can see how the folio page was constructed, with sections of the border glued together,” he says. “We can’t know where those border pieces originally come from, but they were likely created as we see them now after Shah Jahan’s lifetime.”

The professors riff off of one another, which helps the material come alive for students. “I can really tell that they’re both invested in learning from one another,” one student remarks to another as the session wraps up.

Collaboration across both academic divisions and disciplines is rare at Williams, but Mumtaz points out that such distinctions didn’t exist for the Mughals. “History was visual, and visuals were historical,” he says. “The segmentation of today is a very modern, Western thing, and now we are able to break out of that and see things as they were originally meant to be seen.”
—Julia Munemo