Despite his nickname, “Mundo,” which means world in Spanish, Edmundo Meza, a queer Chicanx artist, wasn’t well known in the mainstream art world. His work all but disappeared from view after his death in 1985.

But Meza had a profound influence on other artists in his creative networks. His work—meticulously researched and gathered by Williams art professor C. Ondine Chavoya and co-curator David Evans Frantz—now forms the centerpiece of the award-winning exhibition Axis Mundo: Queer Networks in Chicano L.A., which opens at the Williams College Museum of Art (WCMA) this fall.

“The exhibition flips the narrative on the more common exhibition model, which charts a famous figure and the lesser-known artists they influenced,” says Chavoya. “The other artists of this generation, living and working in L.A. with Mundo—some of whom are better known—believed him to be the most talented among them. So, after the task of finding and preserving it, his work forms the conceptual framework for Axis Mundo.”

The exhibition, which features art from more than 50 artists and groups, has traveled the country since it opened in 2017 at MOCA Pacific Design Center and the ONE Gallery in West Hollywood. Joseph Hawkins, director of the ONE Archives at the USC Libraries, writes in the foreword to the exhibition catalog that Axis Mundo takes “an exhaustive look at artistic practices and cultural politics between the Chicano civil rights, gay liberation and women’s movements and the urgent activism that developed in response to the AIDS crisis.”

In doing so, it shines a light on many artists who have been ignored or rendered invisible. Chavoya and Frantz, formerly curator at ONE, spent years searching for works throughout North America, Spain and the U.K. and meeting with artists or their surviving family members and collaborators. In some cases, Chavoya says he found art works “rolled up in closets or buried in dusty library archives.” That meant he and Frantz had to restore and conserve a great deal of the work in the exhibition.

Axis Mundo is the latest branch of Chavoya’s extensive research that began when he was in graduate school at the University of Rochester. “I found it nearly impossible to study Chicanx artists from the mid- to late-20th century, because there was so little available scholarship at the time,” he says. “I ended up mining the libraries and filing cabinets of Latinx art spaces where I took internships and making direct contact with the artists whenever possible.” 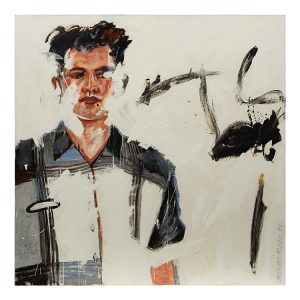 In 2012, Chavoya co-curated Asco: Elite of the Obscure, A Retrospective, a WCMA exhibition presenting the work of a collaborative artists group he studied and chronicled over the years. “Axis Mundo is an expansion on that work and the first time the entire generation is being considered in the context of broader artistic and cultural movements,” he says.

As Chavoya writes in the introduction to Axis Mundo’s catalog, which won the 2018 Association of Art Museum Curators’ Award for Excellence for groundbreaking new scholarship as well as eight other book awards: “The mundos these artists fostered pushed back against social repression. [Their work was] intersectional, multiplicitous and defiant, often in the face of a racist, sexist and homophobic mainstream culture.”