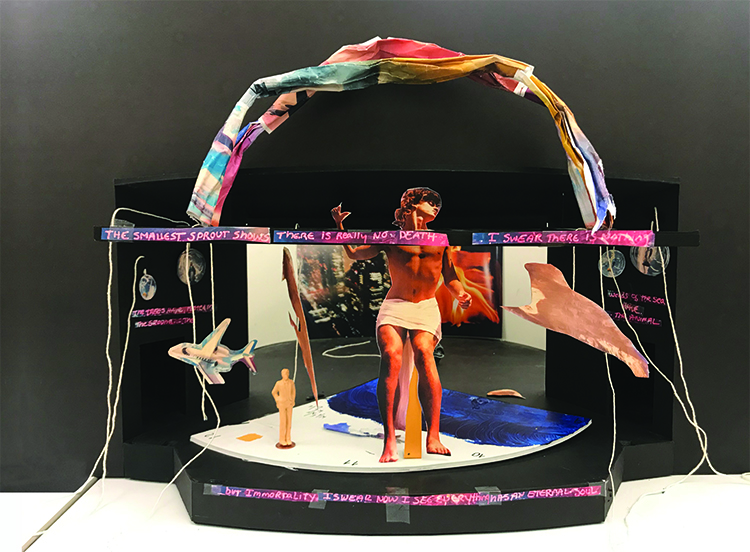 An interpretation of a scene from Angels in America, for the course Worldbuilding. Model by Tobias Delgado ’21.

When David Gürçay-Morris ’96 was a theater and studio art major at Williams, he enrolled in Introduction to Staging and Design, a course that influenced the rest of his career. When he returned to the college 11 years later as a theater professor, he started teaching the course. He changed a lot, from how students access the material to its title, Worldbuilding. But the central focus on staging and set, lighting and costume design remains the same.

Gürçay-Morris says the spring-semester course is as crucial for actors as it is for those pursuing directing and design. “Everyone in theater is engaged in creating a world on stage and then telling a story in that world,” he says. “I hope to give students a set of tools that can be used to build a set or to build the interiority of a character.”

For their first assignment, students met at the Williams College Museum of Art to look at “Cornell Boxes” made by 20th-century artist Joseph Cornell out of found objects to represent complex ideas. Students read the T.S. Eliot poem “The Love Song of J. Alfred Prufrock” and made their own boxes in response. The catch? They had 48 hours to complete them. “Students can’t overthink it, and the results tend to be sloppy and awesome,” Gürçay-Morris says.

The 13 students, mostly sophomore theater majors, then critiqued each other’s work, an exercise through which they learned the importance of feedback. “When we make things, we have blinders on, because we’re so inside it,” Gürçay-Morris says. “Hearing other people’s feedback is the only way to remove them.”

The rest of the semester focused on Suzan-Lori Parks’ The America Play, about the legacy of slavery, and Tony Kushner’s Angels in America, set in New York City during the AIDS crisis and the Reagan presidency. “Both contain big ideas about America and political and social justice,” Gürçay-Morris says.

For one assignment, students interpreted a scene from one of the plays and created 3D collages ranging in size from that of a bread box to an end table and using materials Gürçay-Morris stocks in the design studio.

Teaching assistant Peter Matsumoto ’21, who took Worldbuilding last year, explains: “After 20 minutes of working, students were told to move to someone else’s spot. No one owns the piece they’re making, but they don’t know that going in.”

Theater and English double major Nadiya Atkinson ’21 says she gained a lot from collaborating with classmates. “Seeing what other people brought to a script challenged my notions of the piece and strengthened the choices I ultimately made,” she says of her final project, a staging of a scene in Angels in America. “It pushed everyone in the class to take bigger and better risks.”

That risk-taking is what Gürçay-Morris expects: “I set up conditions in which literal interpretations of text are impossible and students have to struggle and get frustrated and then come through the other side. The results are glorious messes that get students to think outside the box.”
—Julia Munemo