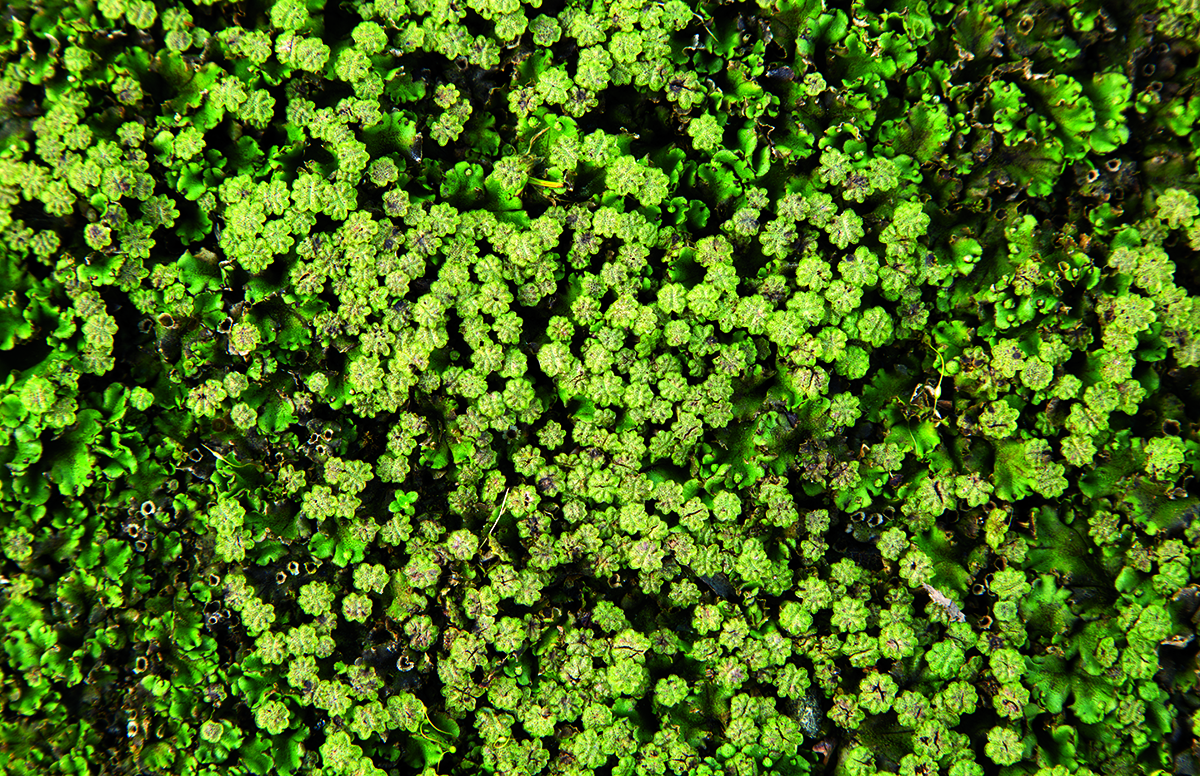 Marchantia polymorpha, a species of liverwort, was one of the first plants to colonize land roughly 470 million years ago. At the time, the tiny plants lowered carbon dioxide levels enough to trigger a mini ice age.

Today liverwort grows all over the world—and all over Williams’ campus. The biomechanics of how it spreads is now the focus of research by Williams biologist Joan Edwards and physicist Kate Jensen, who both say their collaboration has resulted in something bigger than either of them could have achieved on their own.

Edwards, the Samuel Fessenden Clarke Professor of Biology, long has researched fast movements in plants and decided to study how liverworts propel their asexual gemmae to new locations. Gemmae are nearly-microscopic discs of tissue that grow prolifically inside tiny, urn-shaped cups on top of the liverwort plant’s leaf-like thallus. When it rains, the cups fill with water, and the gemmae splash out as far as a meter from the base plant and grow into a new plant.

The speed at which the gemmae travel and the distance they cover are remarkable, yet the mechanism behind the action was poorly understood. In hopes of figuring it out, one of Edwards’ senior thesis students, Adrian Mitchell ’15, used a high-speed camera to record the release of gemmae.

Mitchell, who now works at a New York City architecture firm, collaborated with the Bronfman Science Shop to design and build model cups out of transparent acrylic, allowing him to see what was going on inside. He and Edwards found that the first raindrop to hit the cup fills it with water and stirs up gemmae at the bottom, which then pop to the surface. A second drop splashes the gemmae into the air. “Using dyed water for the second drop, we found that it swooshes out and picks up the gemmae in the upper part of the cup,” Edwards says.

The next step was understanding how the gemmae remained on the surface of the water. Edwards turned to Jensen, who came to Williams in 2017 and studies how different surfaces interact.

Jensen enlisted her summer research students to find a way to measure how gemmae interact with water. They built an apparatus to dip gemmae into water and found that the discs actually don’t float. “It’s more like they stick to the surface of the water,” says Anneliese Silveyra ’21, who plans to continue the project as an Allison Davis Research Fellow.

Says Jensen: “It’s energetically favorable for gemmae to be at the interface of water and air, so they stick to it like glue until they’re launched. More generally, this relates to one of the big questions in biophysics today: How much of what we see an organism do relies on it being alive, and how much is just material interactions or other physics?”

Jensen has collaborated with biologists in the past to answer this question in relation to how certain butterflies develop their brilliant colors, but her work in soft matter physics has mainly focused on non-living materials. Now, with Silveyra in her lab and their mutual interest in how physics plays into the evolution of biological organisms, they plan to expand their study to even smaller botanical particles, like pollen, as well as study other things gemmae do on water surfaces, such as move toward each other and dock together—all areas where Edwards’ botanical expertise will continue to be key to the collaboration.
—Julia Munemo