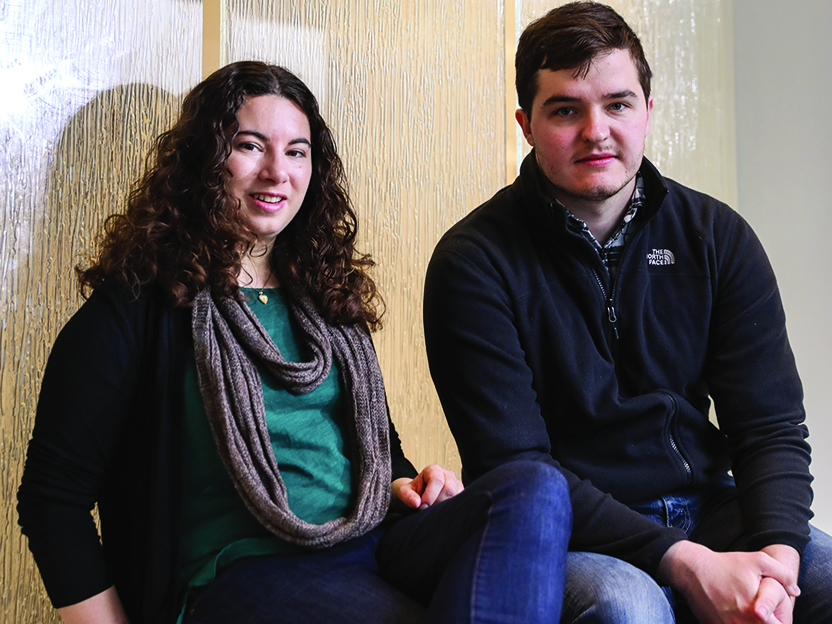 Alice Bradley, a geosciences professor studying Arctic climate, and Will Downs ’19, a geosciences and computer science major, have teamed up to analyze 40 years’ worth of weather data to better understand how storms might ultimately impact the Arctic environment.

Bradley studied engineering as an undergraduate at Dartmouth and earned a Ph.D. in aerospace engineering, with a focus on environmental observation, at the University of Colorado. Her graduate work involved building small buoys that were dropped from drones into the water between sea ice floes and then comparing measurements from the buoys to those taken by satellites. She wanted to understand fluctuations in what she calls “the freeze-up date”—that is, “the time when an area of open water in the Arctic starts to freeze over for the winter,” she says. “The earlier in the fall that happens, the longer the ice growth season lasts, and, at least in theory, the thicker the sea ice can become that winter.”

All of which has a positive impact on the environment, as thicker ice reflects energy from the sun for more of the summer and keeps the planet cool.

Bradley says fluctuations in the freeze-up date may significantly impact how thick sea ice can become in a given winter, which is important “as we transition from an Arctic Ocean primarily covered in thick, multi-year ice to one with exclusively first-year ice,” she says, referring to ice thicker than 30 centimeters that hasn’t survived a summer melt season. “Given predictions of future climate, it is likely that even first-year ice will thin over time.”

Bradley began to wonder what, other than shorter and warmer winters, might impact sea ice growth and freeze-up date fluctuations. She looked to summer and fall storms, which “can carry warm air over cold water, warming the water and delaying freeze-up,” she says. “When Will said he was interested in studying storms, I knew I had the perfect project for him.”

Downs grew up in New Orleans and had to evacuate with his family for several months after Hurricane Katrina. During his sophomore year of high school, Hurricane Isaac closed his school for a week. He spent the time tracking storms on meteorological websites, which sparked a fascination with storm patterns and their effects on the environment.

For his senior thesis at Williams, Downs spent the fall gathering four decades of weather data and satellite sea ice data, creating maps and charts that track freeze-up dates across the Arctic over time. He’s now analyzing that data and hoping to come to a conclusion about effects of cyclones and other storms on Arctic sea ice growth.

“This project is exciting, because it exists at the intersection between geosciences and computer science,” says Downs, who plans to work in software development after graduation, building programs that can predict weather patterns and their environmental effects.

Bradley, who, along with environmental studies professor Laura Martin, joined the faculty last semester as part of the college’s climate initiative, is happy to have a research partner in answering these questions.

“Will’s programming skills, combined with a well-informed interest in weather and climate, means this research has been progressing at an incredible rate,” she says. “He’s doing grad-school level research and generating exciting results.”