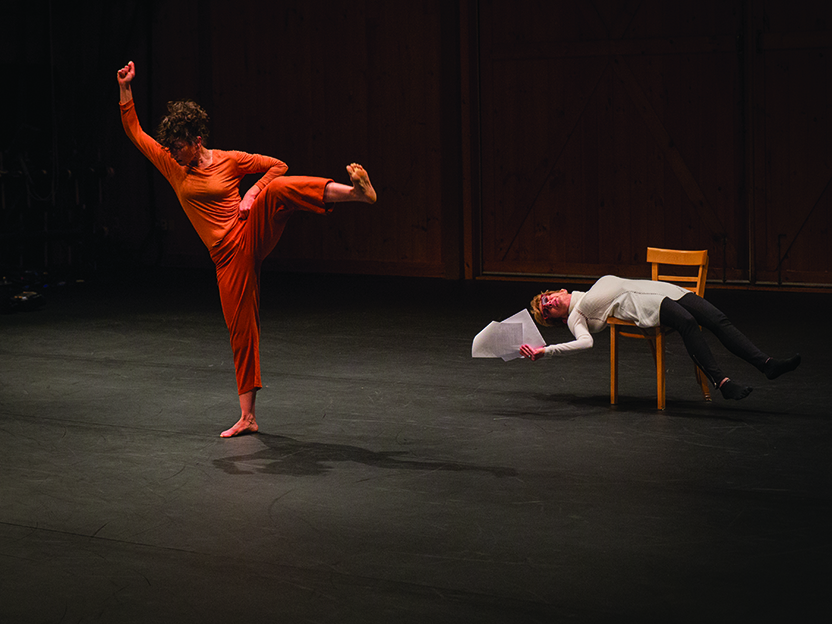 Art history professor Carol Ockman defies easy categorization. With specialties in late 18th- and 19th-century French art as well as contemporary art and culture, she has performed on stage with actors who have won Tony and Academy awards. She wrote a memoir that she then turned into a one-woman show. And she is the curator-at-large of exhibitions at the Marie Selby Botanical Gardens in Sarasota, Fla. Her four-decade career at Williams includes teaching courses on European art as well as representation and the body. Among the courses is her tutorial, Writing About Bodies.

Now, Ockman is collaborating with 25 dancers and scholars in Paramodernities, choreographed by renowned dance artist Netta Yerushalmy. The show—which critics have described as “daring,” “lush” and “brilliantly executed”—explores modernity through six independent pieces, each deconstructing an iconic work of choreography. Within each segment, a scholar reads aloud a text they have written in response to both the original piece and Yerushalmy’s work as the dancers perform it.

Ockman’s piece explores dancer and choreographer Martha Graham’s Night Journey, which premiered in 1947 and is based on a scene from Sophocles’ Oedipus the King. “Graham’s feminism and dual love for the classical and the modern interested Yerushalmy and me,” Ockman says.

The segment opens with Ockman falling onto the stage, “dead.” She comes back to life, describing an experience in a dental chair that reclined in a way that reminded her of the angle of the bed shared by Oedipus and his mother and wife, Jocasta, in Night Journey. “How do you experience or process trauma?” she asks the audience. “Even a small one? How can you give it form? When is it shrouded in silence?”
Moving among the dancers on stage, Ockman ultimately juxtaposes her own experience of trauma—that of losing her father, a dentist, to suicide, which informed her memoir—with that of Jocasta (as performed by Graham), who takes her own life at the end of Night Journey. She also draws viewers’ attention to the choreographer’s power, saying: “Much like Graham, her heroines all refuse traditional female roles. They breach social expectations. They don’t submit to men and are often driven to acts of hatred or courage. They’re anti-heroes, bad girls who go against prescribed behavioral codes for women. They challenge us to think about how we perceive the ethics of character.”

In another segment of Paramodernities, historian Julia Foulkes ’86 deconstructs choreographer Bob Fosse’s Sweet Charity. Foulkes, a New School professor who has written about early modern dance, seeks to connect dance to “wider social and political concerns,” she says. “Yerushalmy’s idea pushes these goals even further by making the movement itself the foundation of research and meaning.”

Ockman and Foulkes have toured with the show since its world premiere at the Jacob’s Pillow Dance Festival in August 2018. Upcoming performances are scheduled for New York Live Arts in mid-March, the Bates Dance Festival in July and at Wesleyan University in November.

The work asks a lot from audiences, Ockman says: “They must listen to text and watch bodies dance simultaneously. Yerushalmy wants us to think about bodily knowledge as intellectual knowledge.”

That understanding is increasingly central to Ockman’s teaching. She says of Writing About Bodies, which she taught in the fall: “My tutorial grows out of my body-based experiences, including performing in Paramodernities. Writing About Bodies encourages students to fuse personal and academic writing, fostering an embodied understanding of why they’re invested in the work they do.” —J.M