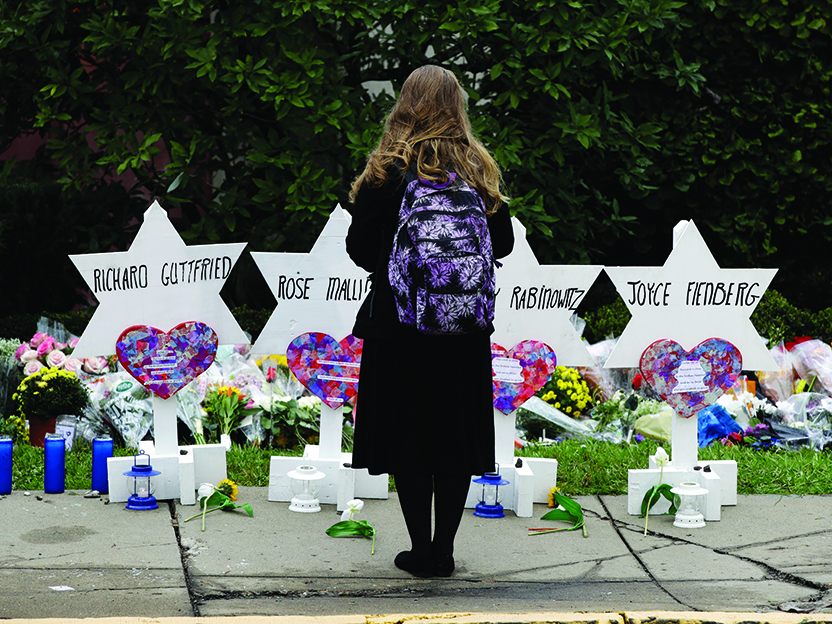 A makeshift memorial commemorates those killed in a shooting at the Tree of Life Synagogue in Pittsburgh, Pa., in October 2018. (AP Photo/Matt Rourke)

A timely exploration of anti-semitism in a new course taught by religion professor Jeffrey Israel took on even more significance after a fatal shooting at the Tree of Life Synagogue in Pittsburgh, Pa., in October 2018.

The course, Anti-Semitism, investigates the “intellectual traditions, political movements and cultural objects that portray Jews, Jewishness or Judaism as essentially pernicious.” Israel developed the class during the run-up to the 2016 presidential election, with the intention of studying everything from ancient Egyptian anti-Jewish ideology to what he calls “today’s anti-Semitism/anti-Zionism quagmire.”

“I had a feeling the time was right,” he says of developing the course. “I worried we would see a rise in violence against Jews.” Noting that anti-Semitism has been “under-theorized,” Israel designed the course around theoretical questions. One in particular—How should anti-Semitism be defined?—came into sharp focus after the Oct. 27 shooting.

According to Jake Porath ’19, a history and political science major and one of seven students participating in the class, “Most people think anti-Semitism is a religious hatred geared toward Jews. But Professor Israel helped us understand that this act was based on a racial stereotype about Jews leading a conspiracy whose aim is to pursue world domination through financial globalism and the empowerment of nonwhite races.”
Israel says this distinction is often “willfully ignored” when it comes to understanding anti-Semitic acts, including the shooting. “In many cases, coverage of the shooting insisted on interpreting it as an assault on ‘people of faith,’” he says. Yet archived screen shots of the shooter’s social media posts, which the class studied closely, showed that “he sought to kill Jews as a nonwhite menace to white America.”

While the content was disturbing, it was helpful to analyze it within the context of the course, Porath says. “I was grateful for a toolbox to help me try to make sense of what happened,” he adds.

The small size of the class was also beneficial, says Catherine May ’20, a political science major with a concentration in public health. Discussions that could have been awkward instead “became a team effort,” she says. “Even when our thoughts weren’t fully formed, we could express them and then work together to follow them to their logical conclusions.”

Not that Israel, who was promoted to associate professor with tenure beginning July 1, offered the students easy answers. As he does with all of his courses, he assigned the students four papers, each with an open prompt. “I believe students need to be put in a position to find their own meaning in the world,” he says. “The more I curate that, the more I get in the way of their capacity to develop views about the material. Instead, I work with them to find a window into the material that helps them write something that reflects their own thoughts in robust, sophisticated and textually rich ways.”

May says the assignments motivated her to take risks she wouldn’t otherwise have considered. “They took longer to write—I had to develop my idea, look at the evidence, find readings to support my argument,” she says. “But I found them deeply fulfilling.”

Israel, who also teaches Judaism: Before The Law, Religion and the State, and What is Religion?, among other courses, says the goal in all of them is the same: “I always hope to provide students a space where they can be fully present—emotionally and intellectually.”
—Julia Munemo