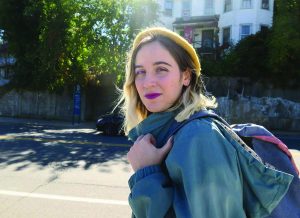 Linda Worden ’19, a political economy major from Penticton, B.C., is headed to the University of Oxford next fall as a Rhodes Scholar. Worden plans to pursue an M.Phil. in comparative social policy with an emphasis on social policy reform and its effects—and to pursue her favorite sport, roller derby. Williams Magazine checked in with her to learn more.

What inspired your path?
As part of Winter Study in 2017, I did an independent study project to interview precariously housed LGBT youth in Vancouver, Canada. The experience combined my interests in social policy and housing justice.

Why an M.Phil.?
The comparative and interdisciplinary nature of the M.Phil. is ideal for further exploration of social and housing policies due to its focus on social citizenship, typologies of welfare states and social policy reform pressures.

What do you hope to learn?
I want to better understand the role of new social risks, such as deregulation of finance, immigration and mental health, on both the welfare state and citizen participation across different national contexts.

So, roller derby?
I love roller derby! While abroad on the Williams-Exeter Programme at Oxford, I learned to skate with Oxford Roller Derby. I plan to return to their team next year.