From Ethnography to Art 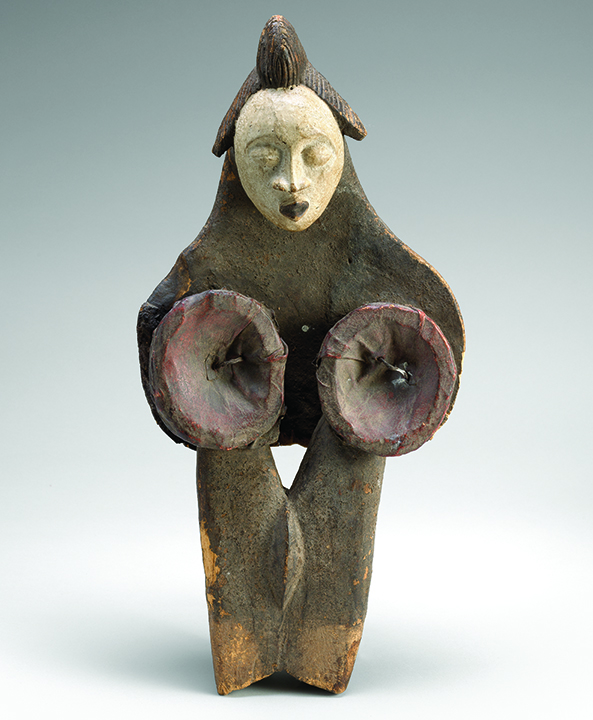 Michelle Apotsos joined the art history faculty in 2014 as Williams’ first scholar focused on the art of the African continent. Though her work filled a gap in the college’s curriculum, she soon found that the materials and collections already here, particularly those of the libraries and the Williams College Museum of Art (WCMA), were rich in resources that supported her teaching and research. And those collections have only been growing.

“Despite its earlier focus on European and American art, Williams had quietly been acquiring materials for the study of art and culture from the continent over many years,” Apotsos says.

As some of those sources reveal, works from the African continent were long considered a form of ethnography. Exhibitions positioned the works as “art primitif,” Apotsos says, meaning they intentionally fetishized the objects to deepen public support for the colonial regime in Africa.

“On the one hand, such exhibitions were meant to demonstrate the supposed need for ‘European civilization,’” Apotsos says. “On the other hand, they tantalized European armchair adventurers who took the objects as evidence of what they perceived to be ‘lost worlds.’”

The objects weren’t studied in an art historical context until well into the 20th century. Though the first major exhibition in the West took place in 1914, Apotsos says, “It wasn’t until the 1980s, when post-colonial theory was really catching hold, that a number of major institutions put on exhibitions positioning art works from the continent as important in and of themselves.”

That shift in thinking about art from the African continent is evident in a new collection that includes exhibition catalogs, a recent gift to the Sawyer Library and Chapin Library of Rare Books. The catalogs cover both the anthropological exhibitions of the early 20th century as well as those from major art institutions exhibiting the art through a post-colonial lens.

The catalogs are just one part of the donation, which consists of more than 850 books, pamphlets, magazines and pieces of ephemera from Suzanne Bach, a retired collector and dealer in African art who lived in Williamstown for many years. In 1991, Bach lent some of her vast collection to WCMA for an exhibition of African masks. When it came time to downsize her private collection of research materials gathered over many years, she thought the college would be a perfect beneficiary.

Apotsos says she is delighted by this new collection and what it means for her teaching. Her spring tutorial, African Art and the Western Museum, specifically looks at issues associated with the exhibition of African objects in Western institutions. With these exhibition catalogs, her students can get a firsthand look at how museum curators have created targeted experiences of these objects over the course of the 20th century.

“They create a wonderful illustration of the conversations, power hierarchies, negotiations, compromises, biases and anxieties the field has experienced over the last century,” she says.

Apotsos also plans to use these texts in her introductory course, Materials, Meanings and Messages in the Arts of Africa, which she teaches in the museum’s Object Lab. The catalogs, she says, create a timeline of African art history.

“These books are not only important for their historical value,” she says, “but they’re also a touchstone for understanding what was the standard—if deeply problematic—practice for so long, and how we can move forward from this moment.” —Julia Munemo