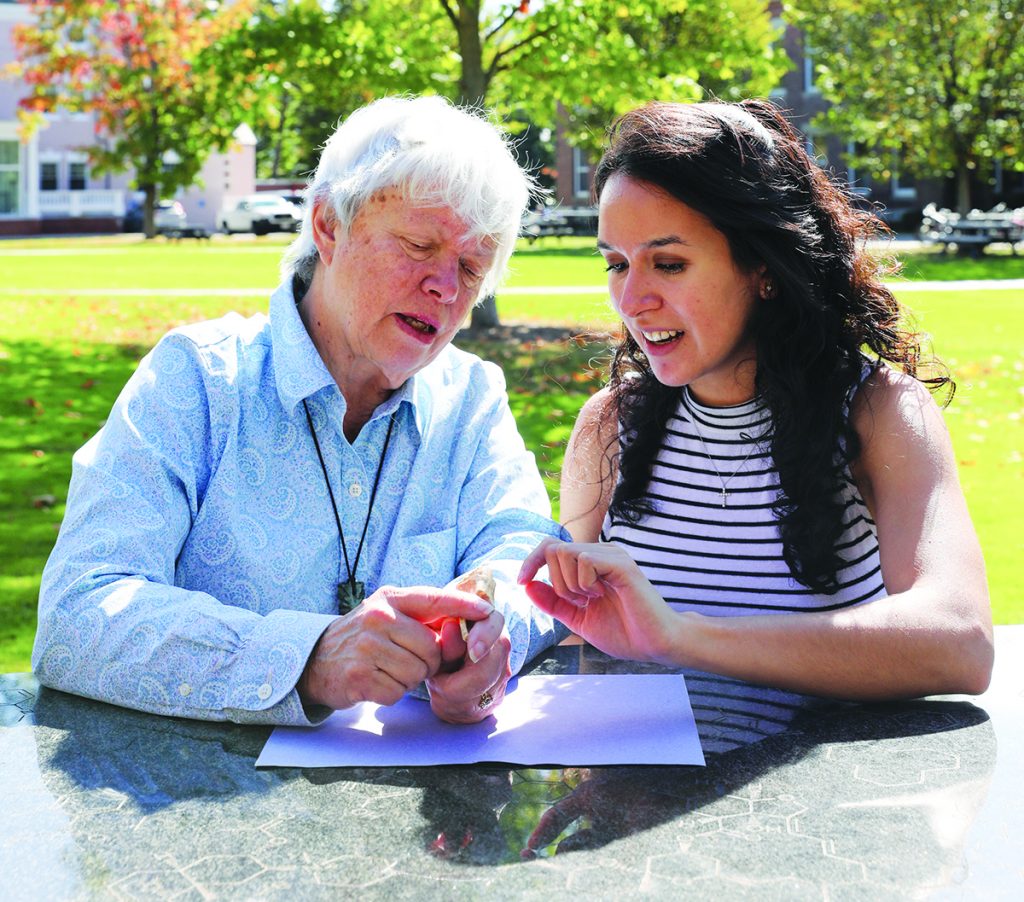 Anne Skinner came to Williams in 1966, when her husband Jim was hired to teach chemistry. At the time, there were two full-time female professors at the college, and coeducation was still several years away. But Skinner, armed with a doctorate in chemistry, was determined not to be what she calls a “trailing spouse.”

She started teaching lab sections part time and went on to build a career that spanned 44 years—retiring in 2011 as Williams’ Senior Lecturer in Chemistry, emerita. A self-proclaimed “archeological chemist,” she continues to conduct research and publish on fundamental questions about the origins of humankind. In short, she says, “I determine the ages of fossils associated with human evolution.”

After a sabbatical in 1970 with her husband, in which they both taught secondary school chemistry in Nigeria for two years, Skinner was invited by a Williams colleague to attend a conference in Brookhaven, N.Y., to discuss applications of physical science to the study of archeology. That connection and another sabbatical in the early 1980s led Skinner to Oxford University, where she spent a year learning more about archeology. Around this time, the scientific community was beginning to use electron spin resonance (ESR) dating, a technique that measures the amount of natural radiation an object, such as a tooth, has been exposed to. “The longer something has been buried, the more radiation damage it will receive from the soil and rocks around it,” she says.

Williams had equipment for ESR dating, and Skinner jumped at the chance to use it in her work. “Technically what I do is called paleoanthropology, looking at issues in the tempo and mode of human evolution,” she says. “While most archeology studies the last 50,000 years, I tend to work in time frames that go back at least 100,000 years and sometimes up to a million years.”

After her husband died in 1988, Skinner continued to teach at Williams, focusing on general chemistry and the application of the scientific method to archeology and paleoanthropology. She ran a lab in which students experienced ESR dating firsthand, took groups of students to dig sites during Winter Study and served as the campus radiation safety officer from 1990 until 2010, overseeing the removal of plutonium and uranium oxide that had been on campus since World War II.

In addition to using ESR to date samples sent to her by researchers, Skinner has traveled the world to take part in digs at early hominid sites. “I was at a site in India when some of the archeologists noticed I didn’t really know what I was doing, and they took it upon themselves to teach me better techniques,” she says. Skinner has used those techniques in places including Tanzania, Egypt and Brazil, which she recently visited on a Fulbright fellowship.

In 2014, she used ESR dating to show that a Homo sapiens tooth found in Brazil was 20,000 years old—work that challenges the common understanding that humans migrated to the Americas only 13,000 years ago. For her next project, in Serbia, she plans to examine whether the timelines of Neanderthals and Homo sapiens overlap.

Back on campus, Skinner has three lab students for the fall semester, “working on all the interesting questions we still haven’t answered.”