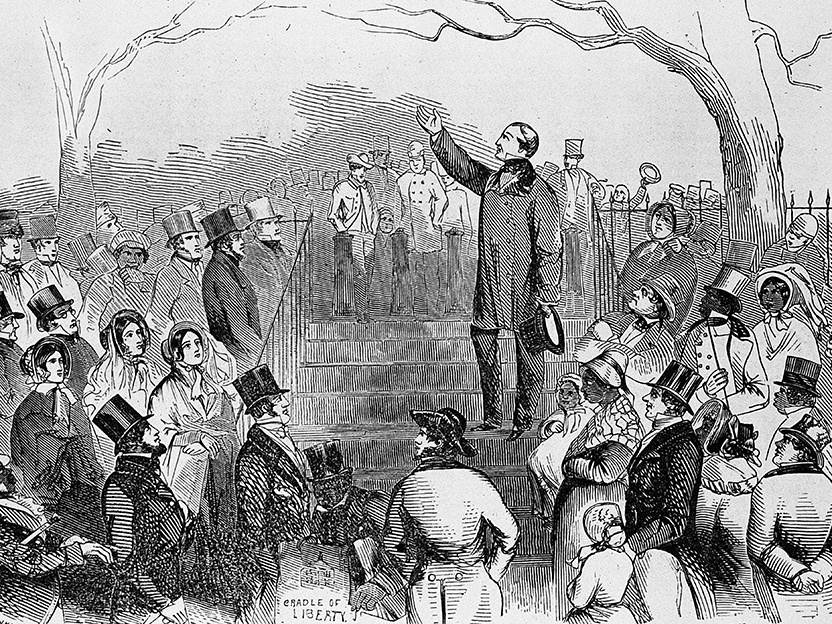 Williams College was an early proponent of the movement to end slavery. But as Darin Li ’21 discovered when doing research for the history course Slavery in the American South, the seemingly good intention prevalent at the college depended on deeply racist ideas.

“The Williams College Anti-Slavery Society, founded in the 1820s, did not envision giving freed slaves a place in white American society,” says Li. “Rather, it supported colonization, which was the movement to send them to Africa to form settlements in their supposed homelands.”

Li, who researched the society (known as WASS) in the college archives, wrote a paper for the class, which is taught by Charles Dew ’58, the Ephraim Williams Professor of American History. In the paper, Li argues that “Williams, unlike many of its peer institutions at the time, was something of a colonization incubator. It was, by one scholar’s estimation, the earliest such organization in Massachusetts.”

Li says that’s something the college should take pride in—but within the proper context.

“Members of WASS and other American colonization societies understood that slavery was morally unjust,” he says. “But they could not imagine a mixed-race society, so colonization seemed like the only solution.”

The idea received widespread support for a time, including from Williams President Edward Dorr Griffin and Trustee Henry W. Dwight, who was also a Massachusetts Congressional representative. One of the documents Li discovered in the archives was a letter dated August 1826 from WASS to a national anti-slavery newspaper, arguing that the only solution was to free enslaved people and “send them back” to Africa.

By then, the African continent was no longer home, says Dew, who has taught Slavery in the American South for more than 15 years. “As early as 1740, the majority of black slaves were American-born,” he says. “By the 1820s, they had known no other place, their families were here, so the concept was deeply flawed.”

Li says he wishes there were documents in the archives to support the college’s eventual shift to radical abolitionism, which was the movement to free enslaved people by any means necessary, without reference to “repatriation” or colonization. “For reasons I can’t trace, there is nothing in our archives about WASS or the college’s abolitionist movement dated later than 1829,” he says. “But we have to assume that as the mood shifted toward radical abolitionism at some of our peer institutions, so, too, did the mood shift at Williams.”

Dew, who has written extensively on the history of slavery, including the memoir The Making of a Racist: A Southerner Reflects on Family, History and the Slave Trade, says conclusions like these are exactly what he hopes his students will arrive at in his classes. As he writes in the course syllabus, “The best way to learn how historians practice their craft is to do what they do: background reading in key secondary sources, research in appropriate primary source materials and conclusions drawn through the medium of the written word.”

“Teaching this course makes me feel like I’m giving to Williams what it gave to me as a student—a place to question the notions I was raised with,” Dew says. “Faculty here take students very seriously, and we work with them to find out what’s true and accurate rather than telling them what they need to know.

“Darin’s research and writing skills are outstanding and will serve him well in whatever career he follows,” Dew adds. “Obviously, he would make a first-rate historian.” —Julia Munemo