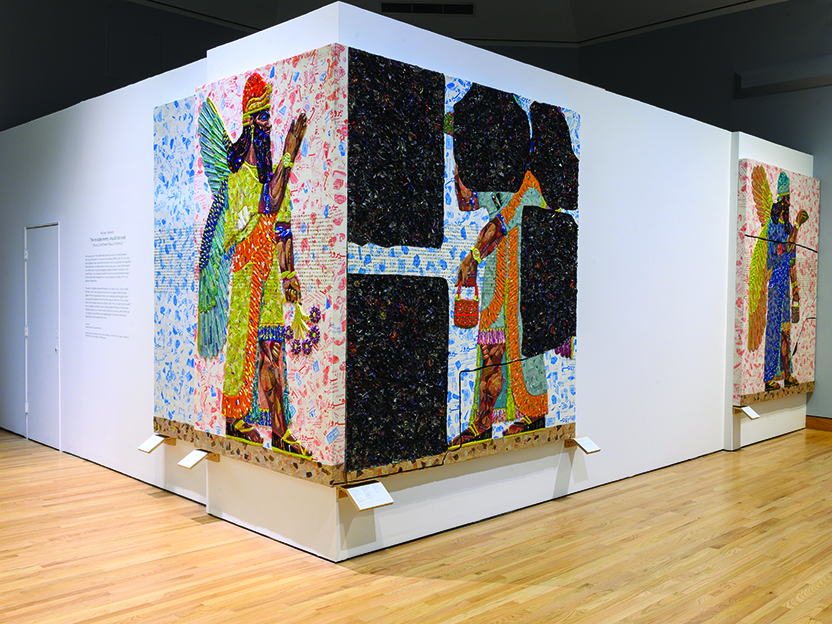 View of the exhibition The invisible enemy should not exist [Room Z, Northwest Palace of Nimrud].

The modern-day dismantling of the 9th century BCE palace of King Ashurnaspiral II began in the mid-19th century, with its excavation by British archeologists. In 2015, the palace was demolished by ISIS. Among the thousands of objects lost, removed or destroyed were 13 limestone reliefs. Two more reliefs from the palace are among the oldest objects in the Williams College Museum of Art (WCMA) collection—gifts from an alumnus in 1851.

Now WCMA’s reliefs are in conversation with full-size recreations of seven others as part of the exhibition The invisible enemy should not exist [Room Z, Northwest Palace of Nimrud], on view through April 2020 in the 1935 Gallery. Part of a long-term project by the artist Michael Rakowitz, the new reliefs are constructed from contemporary Iraqi food packaging available to diasporic populations in the U.S.

As Rakowitz told The New York Review of Books in July: “I’ve dedicated my life to making works that are about disappearance and reappearance but also through means that are so vulnerable that it will disappear again.”