The Mathematics of Locust (and Other) Swarms

Williams » Today: Magazine » Summer 2018 » Study » The Mathematics of Locust (and Other) Swarms 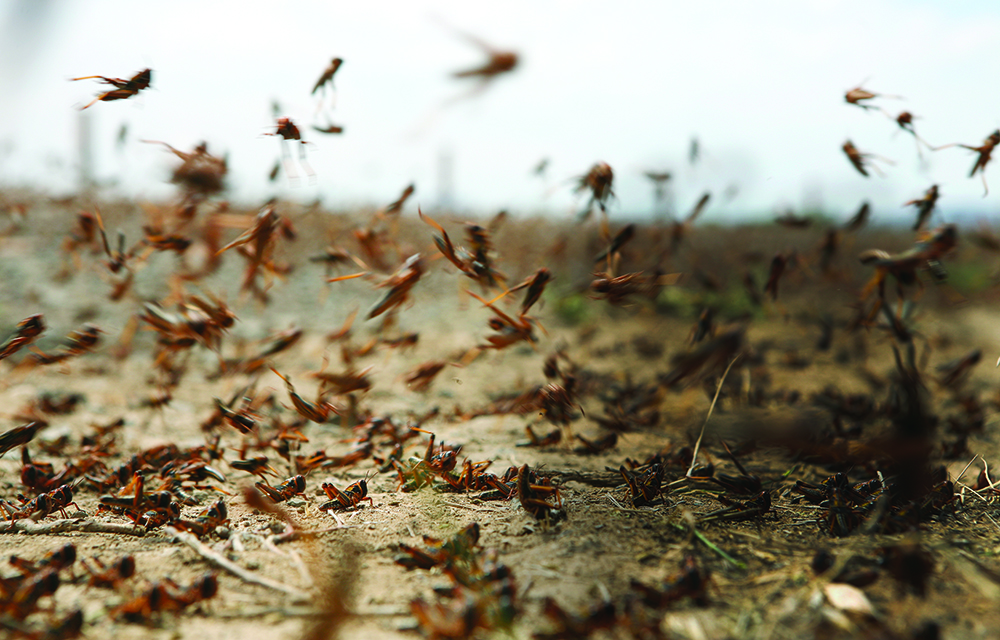 To Professor of Mathematics Chad Topaz, the world is full of patterns. From the stripes on a zebra to the V-shaped flight formation of migratory birds, patterns seem to arise easily in nature, and Topaz has long sought to understand them. In graduate school, he studied the mathematical properties of pattern formation in earnest, with a dissertation on the highly symmetric patterns of waves on the surface of fluids. Then, during his postdoctoral years, he became interested in biological aggregations, sometimes called swarms.

“Why do some fish swim in patterns that look like a tornado?” he asks, before explaining that each fish follows a set of behaviors that developed over millions of years of evolution to help each individual use less energy and reproduce at higher rates. “I use mathematical tools to try to understand why, when 20,000 fish all follow these simple rules at the same time, the result is a fish tornado.”

Topaz, who taught at Macalaster College for 10 years before coming to Williams in 2017, structures his work on biological aggregations with three overarching questions: How does each individual in the group behave, what is the large-scale pattern-forming behavior of the group, and how are these two levels of behavior linked?

He’s currently applying these questions to locust swarms, which cause widespread devastation in North Africa, the Middle East and the South Asian subcontinent. As billions of locusts migrate over miles of farmland, they form into marching swarms that create river-like patterns across the ground. Topaz has made mathematical models to better understand the pattern of locust swarms—and to investigate strategies for easing their effects.

His models consider both the natural patterns in locust swarms and how the pattern of resources on the ground might contribute to their development. “We currently try to control locust swarms with pesticides,” Topaz says. “But these cost hundreds of millions of dollars, kill non-target species, make humans sick and are only 50 percent effective.

“One of my models suggests a mathematical explanation for why locust swarms are hard to disperse once they’ve formed,” he says, offering a possible explanation for the inefficacy of pesticides. “This result suggests that we need to think harder about how to prevent swarms in the first place rather than how to mitigate them once they have formed.”

Locusts have two main modes of behavior. Their usual state is antisocial, but they also have an aggressive mode that is triggered when they come into close contact with one another. “In their gregarious state, locusts eat more, migrate more and are wired to want to stay inside the group,” Topaz says. “So the challenge is to avoid triggering their gregarious state.”

This is where another of Topaz’s ideas comes into play. “The model I’m working on now suggests that if crops are planted in a regular pattern on the ground, locust ‘hotspots’ might be suppressed, but when crops are more randomly distributed, locust populations have some pockets of high population density, which triggers the formation of gregarious swarms.”

Topaz hopes his research—widely published and in collaboration with several partners outside of Williams—might eventually lead to strategies for stopping destructive locust swarms and reducing pesticide use. “One of my long-term goals is to address locust-inflicted humanitarian disasters,” he says.

Chad Topaz teaches courses including Differential Equations and Computational Linear Algebra, and he conducts research on diversity and representation in various institutions and programs.
—Julia Munemo