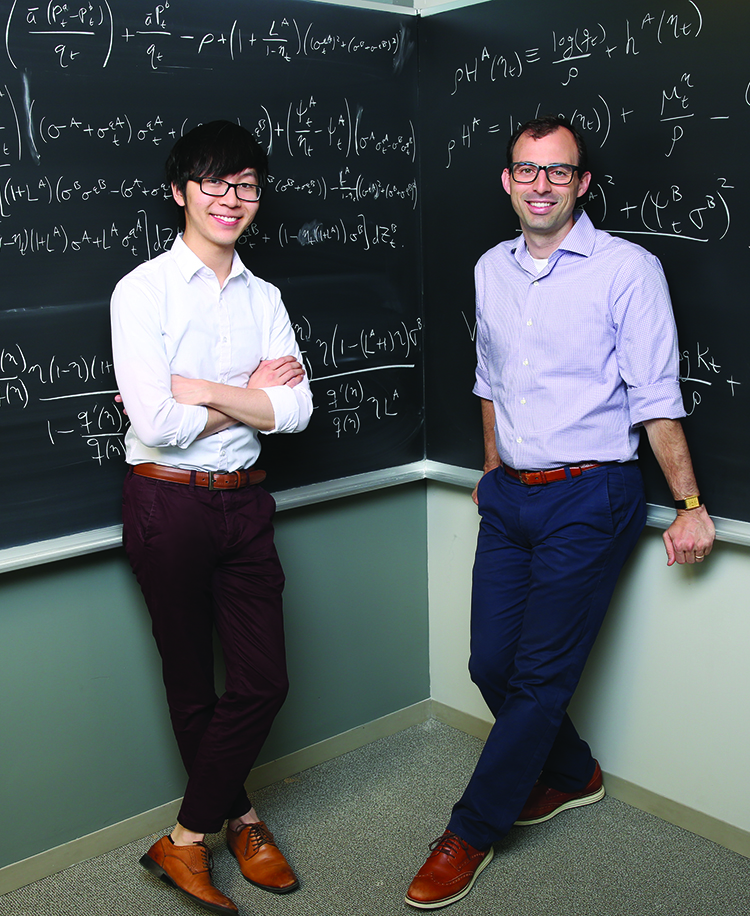 A professor and student collaborate on new macroeconomic models that
better predict how policies affect the global economy.

Assistant Professor of Economics Greg Phelan and economics and math major William Chen ’19 have spent nearly two years developing a model that predicts how countries respond to the economic policies of other countries. Now Chen, who has a summer research and statistics internship with the Federal Reserve Bank of New York, is using those methods to understand how the financial sector affects fluctuations in the economy.

Their model, which uses methods Phelan first applied to understanding the financial crisis of 2008, is distinctive because
it predicts how different policies affect the stability of the global economy. “Many macroeconomic models only describe how the economy behaves when fluctuations are not so extreme,” Phelan says. “This model shows how the global economy behaves in normal times and also during crises—which matters for how countries choose policies—and allows us to assess the risks a country might take and how that affects the stability of the international economy.”

He and Chen got to know each other in Phelan’s course Macroeconomic Instability and Financial Markets. Chen, a sophomore at the time, wanted to better understand his instructor’s methods. For that to happen, he needed to become familiar with mathematical tools more commonly used by graduate students. So Chen spent that Winter Study learning the necessary math as part of an independent study project.

Soon a research partnership between Phelan and Chen was born. And in November 2017, they presented to the Banque de France a paper they co-authored. In it, they showed that when countries are allowed to work together on economic policies, each one chooses regulations that benefit them both—for example, limiting how much the financial sector can borrow or trade in financial markets. But when the same countries develop policies without consulting one another, each country “over-regulates,” disadvantaging them both.

The researchers continued to refine their model, which, Chen says, “compared two essentially identical countries—blocs such as the U.S. and Europe. While that was a good starting point, it’s not true to life. We must consider policy interactions between, for example, developed and developing countries.” So Phelan and Chen removed what they call “the symmetry assumption,” changed some of the details and functionality of the model and came away with something they believe is more accurate—which, interestingly, produces the same outcome. “We still find that if countries don’t coordinate, they’re going to overtighten,” says Phelan, who was to travel to Hong Kong in June to present the latest draft of the paper at the Bank for International Settlements’ Asian office.

Many macroeconomic models assume that a shock to the financial sector, like unexpected losses on banks’ investments, will be followed by a corresponding change in the level of overall activity. But Phelan and Chen are using their methods to develop a new model that allows for the possibility that such responses to shocks aren’t linear.

“The question becomes: If our model makes different predictions than models that assume linearity, how can that information contribute to predictions we make about economic outcomes?” says Chen, adding that he is excited to be using these methods with the New York Fed.

Phelan, meanwhile, is eager to get back to work with Chen in the fall. “After almost two years of collaborating, I don’t consider William a research assistant,” he says. “We’re co-authors.” —Julia Munemo