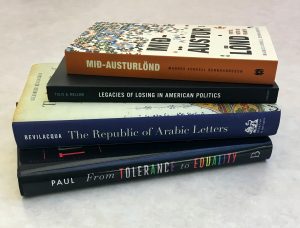 In his survey course The Modern Middle East, history professor Magnus T. Bernhardsson covers topics including cultural diversity, radical religious groups, the impact of imperialism and the discovery of oil. His book Mið-Austurlönd (which means Middle East in Icelandic and was published by Eymundsson in 2018) is based on the class, and “each chapter is like a week in this course.”

American politics is typically defined by winners, but hindsight provides an opportunity to reconsider some political losers. In Legacies of Losing in American Politics (University of Chicago Press, 2018), political science professor Nicole Mellow and co-author Jeffrey K. Tulis review three key moments in American history with an eye on the “losing” side to reveal that “the very mechanisms that caused the initial failures facilitated their eventual success.”

The Republic of Arabic Letters: Islam and the European Enlightenment (Harvard University Press, 2018), by history professor Alexander Bevilacqua, retraces the routes that Christian scholars traveled “to acquire, study and comprehend Arabic manuscripts” and argues that the Western effort to understand Islam happened through “the scholarly commitments of a select group of Christians.”

How did America’s view of gay marriage change so dramatically over the last 25 years? In From Tolerance to Equality: How Elites Brought America to Same-Sex Marriage (Baylor University Press, 2018), political science professor Darel E. Paul writes about how the country’s educational and business elites led the way for cultural change, and he provides a “road map to the emerging American political and cultural landscape.”