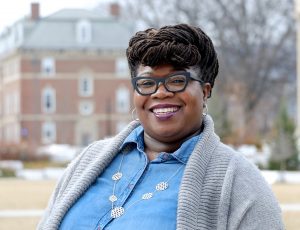 Africana studies professor Rhon Manigault-Bryant will use a Mellon Foundation New Directions Fellowship to attend film school. The fellowships allow faculty to seek training outside their discipline. Manigault-Bryant has long been interested in how some black, male filmmakers represent black women, often by playing the roles themselves.

“I was teaching Introduction to Religion, the year Tyler Perry’s Madea Goes to Jail came out, and I overheard some of my white students parodying the film, which depends on filmic representations of the main character’s faith,” says Manigault-Bryant, whose research has focused on religion and womanist/black feminist thought. “I decided then to develop the knowledge necessary to help students interpret representations of black women on the big screen.”

Movies such as those from Perry, Eddie Murphy and Martin Lawrence often center around the black church, and “the characters played by black men in drag conjure multiple historical stereotypes, especially the mammy figure,” she says.

“I’m eager to put my formal training to use and make documentary film,” she says.