A Future in Physics 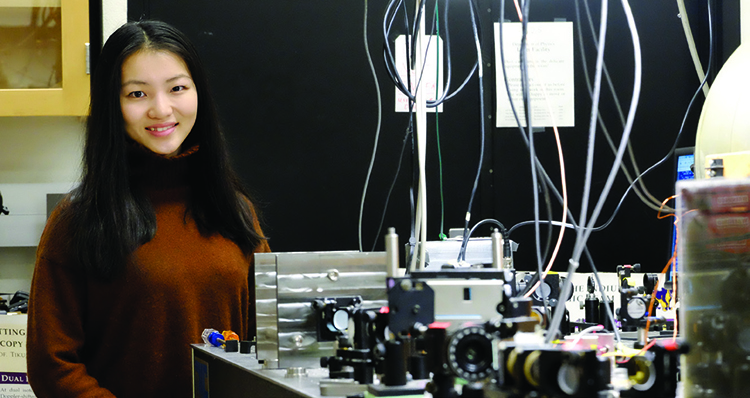 Bingyi Wang ’18 in the laser lab, where she worked with physics professor Tiku Majumder. Photo by Shannon O’Brien

Bingyi Wang ’18 has been named among the inaugural class of Knight-Hennessy Scholars, the largest fully endowed scholarship program in the world. The scholarship supports up to 100 high-achieving students from around the globe in their pursuit of any graduate degree at Stanford University.

A physics major from Xuzhou, China, Wang says she plans to seek a Ph.D. on her way to becoming “a conscientious physicist, using science and technology to improve human lives and promote social change.”

At Williams, Wang was a teaching assistant in the physics and Asian studies departments as well as co-chair of the student group Women and Gender Minorities in Physics and Astronomy. As a researcher in experimental atomic and laser physics, she worked collaboratively with physics professor Tiku Majumder and other colleagues on a project to probe theories of atomic structure in heavy atoms. Their results were published in the February 2018 issue of Physical Review.

“Bingyi has grown into a true junior colleague, an important scientific contributor to all of our ongoing work and a mentor of younger students in the lab,” Majumder says. “I am looking forward to hearing about her exciting future endeavors as she heads to Stanford.”