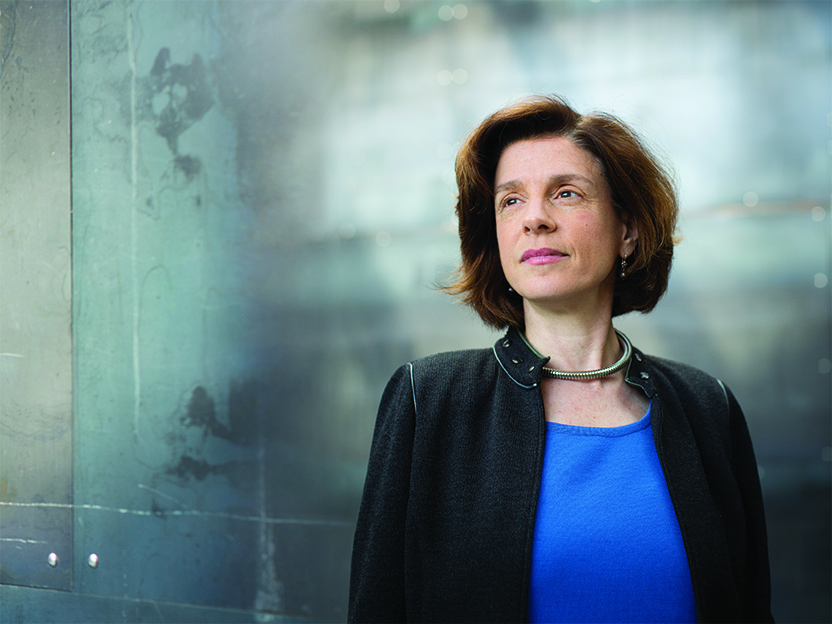 Maud S. Mandel wasn’t looking to become a college president. Her entire professional career—more than 20 years—had been at Brown University, teaching history and Judaic studies, establishing policy and practice as a faculty leader, and, most recently, working to enhance the undergraduate academic experience as dean of the college. She was committed to the place and to the people. ¶ Then, in late November, she received a call. A search was under way for Williams’ 18th president. Would she be interested in learning more? ¶ It was, Mandel says, “an opportunity too good not to explore.” ¶ She knew well Williams’ “enviable position of being a leader in the liberal arts college landscape, modeling answers to the questions facing higher education in the 21st century.” As she got to know more about the college, it became clear to her that, “given where I’ve been professionally, it was a great fit on every side. The presidency of Williams really spoke to me.”

Immediately after the board of trustees announced Mandel’s appointment in March, she began talking with students, faculty, staff and alumni—lots of them. She addressed the campus community one sunny day in April, explaining that it was “gratifying and enticing to discover Williams through the eyes of those who love it.” The many emails, letters and packages of “purple paraphernalia” she and her family received “made clear to us the character of the community we are joining: its tight-knit and supportive culture, its whimsical sense of humor and its intellectual energy.”

That kind of intellectual energy has fueled Mandel’s life and work since her childhood. She remembers at a very young age accompanying her father, Barrett Mandel, to Rutgers University in New Brunswick, N.J., where he taught Modern Drama and other English courses. “He’s a really gifted educator, and I used to go to his classes with him,” she says. “I learned a love of literature and theater and, also, how to teach in creative and interesting ways.”

Her mother, Ruth Mandel, is director of Rutgers’ Eagleton Institute of Politics. Before that, she was founder and director of the institute’s Center for American Women and Politics. “I learned so much from my mom,” Mandel says, particularly “the intellectual rewards that can come from building an academic institution—what is really possible when you can creatively lead an institution in ways that somebody hasn’t before.”

“Williams, with a handful of peers, is in the enviable position of being a leader in the liberal arts college landscape.”

Mandel has drawn deeply from both her parents’ lives and lessons. In the classroom she encourages her students to consider the complexities and constraints influencing their subjects’ choices, particularly those choices that might seem immoral or ethically ambiguous in the context of our own times. In doing so, she challenges students to move past simple value judgments to a deeper understanding of the forces shaping human behavior over time.

As a young faculty member at Brown, she immersed herself in the work of the history department, the Judaic studies program and faculty governance. She served on or led committees concerned with planning and priorities, equity and diversity, and hiring and tenure. In 2014, the year she became a full professor, she also completed a two-year term as director of Judaic studies and was named dean of the college, Brown’s senior undergraduate academic officer.

Among her many accomplishments as dean, stewarding the academic experiences of 6,500 students, she led the establishment of the Brown Learning Collaborative. A peer-to-peer program, the collaborative is aimed at strengthening student learning in what Mandel calls “core liberal arts competencies”: writing, reading, research, data analysis, problem-solving and public speaking. She was also deeply involved with expanding experiential learning opportunities, including those rooted in undergraduate research and community engagement. In addition, Mandel oversaw the creation of the First-Generation College and Low-Income Student Center (FLiCenter). One of the first centers of its kind in the country—and developed in partnership with students and staff —the FLiCenter supports Brown’s first-generation and low-income students in achieving their academic and personal goals.

“I learned early on at Brown the importance of working collaboratively, which is really a placeholder for listening closely,” Mandel says. “Campuses are full of really smart people, and, if you listen closely, they have very good ideas. You take the very best ideas and move them forward, working through disagreements until you come to a viable consensus. To me, the best models of leadership at a college or university tap into the collaborative energy of multiple constituents in this way.”

In announcing Mandel’s departure from Brown, University President Christina Paxson praised the changes she brought about as well as her leadership style. “Both inside the classroom and as a senior academic leader, Maud’s impact on the undergraduate experience at Brown has been nothing short of transformative,” Paxson stated. “She is a deeply knowledgeable higher education leader.”

Says Mandel, “I see myself as an educator, first and foremost. What’s central about that role is thinking critically about evidence, teaching students to challenge assumptions, how to find answers to the questions they have, exposing them to explorations and topics that they didn’t know were out there, and helping them figure out what they’re curious about.”

At Brown, she taught courses on aspects of Jewish and European history, including antisemitism and Islamophobia, the history of the Holocaust, Zionism and the birth of the State of Israel, and the history of minorities in Europe. She plans to continue teaching at Williams once she’s settled.

“I take such joy in teaching,” Mandel says. “So much of what has shaped my career is helping students find their own way intellectually, personally and morally—and to help them figure out their pathways through education.”

The Joy of Exploration

After attending public school in Princeton, N.J., Mandel headed to Oberlin College, where she majored in English. She studied abroad in Aix-en-Provence, where she became close friends with members of the Armenian refugee community living there. In long conversations in which they recounted the circumstances that led their families to France, Mandel heard echoes of her own family’s history of diaspora, displacement and genocide. 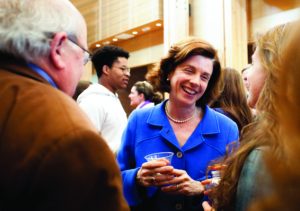 Mandel’s grandfather, a shopkeeper from Vienna, was imprisoned in Dachau during Kristallnacht in 1938. At the time, the Nazis were pressuring Jews to leave Europe, and her grandfather was released only after her grandmother procured a ticket for him to travel to Shanghai by boat.

The couple instead made their way to Hamburg with their infant daughter—Mandel’s mother, who in 2015 related their story to The Star Ledger of New Jersey. The family boarded the St. Louis, a German ocean liner bound for Cuba with 937 Holocaust refugees. The ship arrived in Havana but was turned away. Requests to dock in Florida and Canada were also denied, and the captain was forced to return to Europe.

Mandel’s family and others were dropped off in England, where her grandfather eventually joined the British Army. Her grandmother and mother moved to the English countryside. Other refugees went to France, Belgium and the Netherlands. Historians estimate that as many as 250 of the passengers aboard the St. Louis ultimately perished at the hands of the Nazis.

Having grown up with stories of refugee flight and deportation, Mandel felt a sense of kinship with the Armenian refugees she came to know in France. She returned to Oberlin with a deep desire to understand more. It was too late for her to switch majors. “But I took courses in Russian and Ottoman history to learn as much about the Armenian experience as I could,” she says. “That was the beginning of my academic journey into the study of minorities, displacement, integration and history.”

The summer after she graduated from college, Mandel took a job with the New York Association for New Americans (NYANA), founded in 1949 to help resettle the large numbers of Russian Jews migrating to the United States. Mandel thought she would pursue a career in immigrant law, and she felt a strong connection to NYANA’s mission. Around the time she worked there, the organization provided assistance to 20,000 Jewish refugees, the largest influx in any single year since immediately after World War II.

But, she says, she “really missed school.” Reflecting on her experience with the Armenian refugees in France, the work she was doing with NYANA, and her family’s history, she realized she had the makings of a comparative research project that became her dissertation at the University of Michigan and, ultimately, the focus of her teaching and scholarship at Brown.

Her work centers on how the policies and practices of inclusion and exclusion in 20th-century France have affected ethnic and religious minorities, most notably Jews, Armenians and Muslim North Africans. She has published widely about these subjects, including her book In the Aftermath of Genocide: Armenians and Jews in Twentieth-Century France, published in 2003 by Duke University Press. Her second book, Muslims and Jews in France: History of a Conflict, was published by Princeton University Press in 2014.

“This all started when I studied abroad: thinking about Jewish minorities and Armenian minorities, these very different but parallel backgrounds, and the impact of the French state,” she says. “My work as a historian began with these initial questions that took root as a college junior while studying abroad. I took these questions with me to graduate school, where I was immersed in the discipline of history as a tool for answering these questions.”

It’s not surprising, then, that inclusion is a central focus of Mandel’s presidency at Williams, which began on July 1. She’s quick to point out that Williams has made meaningful progress on issues such as access to higher education and diversification of the student body, faculty and staff. “But a subsequent issue that higher ed is dealing with, one that’s particularly interesting to me, is thinking about how institutions themselves will have to change to reflect the changing nature of the student body,” Mandel says. “Inclusion in higher education has come to mean not just: ‘We want to bring people here from different walks of life.’ Once the people are here, we have to consider what has to happen to ensure that they are successful in their journeys through these institutions.

“Differences among people can sometimes lead to misunderstandings, largely due to ungrounded assumptions and lack of deep knowledge as to the origins of those differences,” she says. “How do we create environments where students can successfully learn about each other and interact comfortably with people and ideas that challenge them?” It’s a crucial endeavor at a time when people are more likely to listen to voices they agree with rather than engage across difference or risk being called out publicly. That kind of “uncomfortable learning,” so central to the Williams experience, is also at the core of the liberal arts—the value of which is under increased scrutiny.

Mandel says it’s necessary for leaders in the liberal arts “to frame what we’re doing so that people can understand how profoundly powerful this kind of education is for students as they move forward not only as professionals but also as members of the global community. These are skills students have worked on their whole lives. But in that high-octane, four-year experience that a liberal arts education provides, they can make light years of advances on these competencies. These are transferable skills that they can take with them no matter what they do.”

The challenges facing higher education are “bigger than just our schools,” she adds. “But Williams, with a handful of peers, is in the enviable position of being a leader in the liberal arts college landscape, with significant human and other resources, to move forward in this space. Working together, with faculty, staff , the student body, parents and alumni, we can think together about how to ensure that Williams is proactively addressing these challenges and helping to lead the national conversation on the power of the liberal arts in today’s world.” 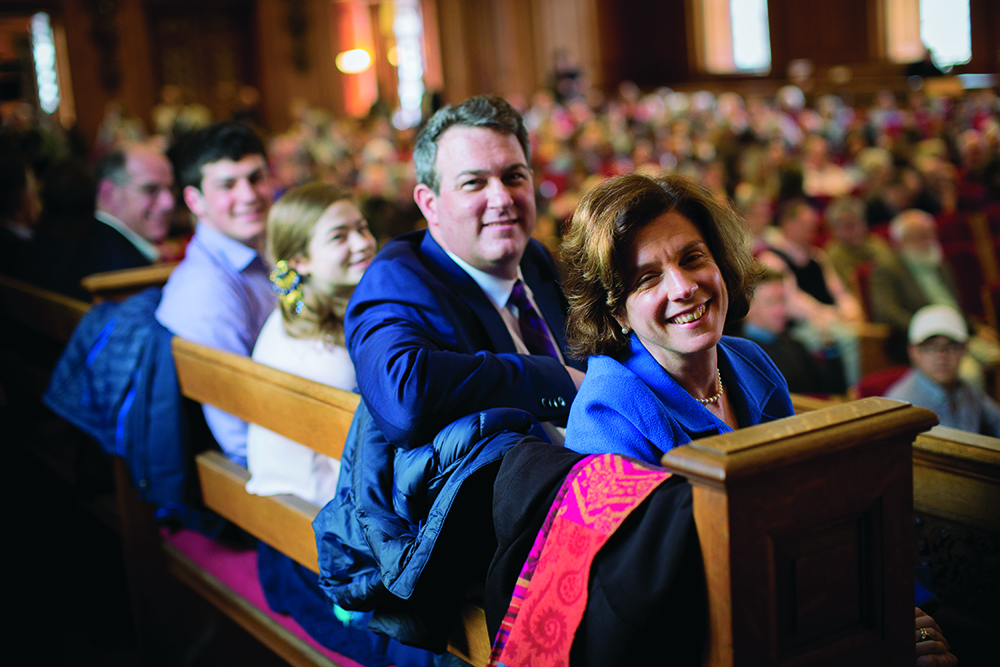 Maud and her family in Chapin Hall.