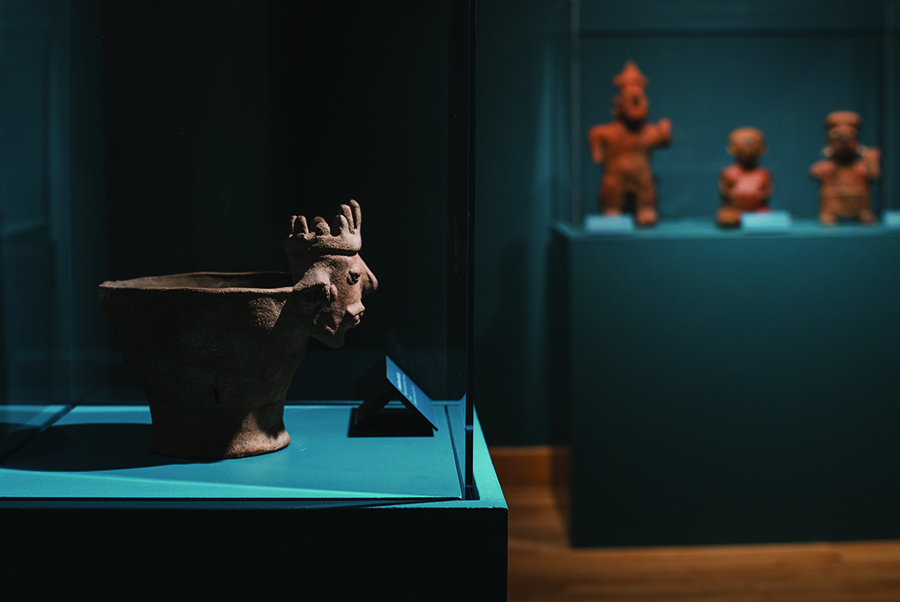 Stepping into the dimly lit Faison Gallery at the Williams College Museum of Art (WCMA) feels like taking a step back in time. Masks, sculptures depicting animals and gods, and human-like figurines line the walls and populate the exhibition cases. As visitors follow the carefully illuminated pathway of ancient objects, a deeper understanding of Pre-Columbian civilizations is gained. The exhibition, “The Seeds of Divinity,” is informed by student research from a fall-semester course of the same name, taught by anthropology professor Antonia Foias.

“Both the class and the exhibition consider Pre-Columbian civilizations’ use of the human body as a prism for understanding and depicting the supernatural,” says Foias, the curator of the exhibition and an archeologist who studies ancient Mesoamerican civilizations. “In a typical class, I discuss the archeological process and show my students slides from my digs. But this course gave us the exciting opportunity to study ancient artifacts up close, sometimes even holding them in our hands.”
Foias’ course was held in WCMA’s Object Lab, a hybrid gallery-classroom space used each semester by faculty from a variety of academic disciplines. Professors select works of art that employ, investigate or interpret key course concepts. Students in Foias’ class also made use of the Rose Object Classroom, where materials from the museum’s collection can be handled under supervision. Both spaces give students the opportunity for what Elizabeth Gallerani, Curator of Mellon Academic Programs, calls “close looking.”

Foias’ 11 students examined 16 works from WCMA’s permanent collection and 11 objects on loan from the Worcester Art Museum in the fall. Another six objects on loan from the Yale University Art Gallery arrived in time for the exhibition, which runs through Aug. 31.
“In class, we tried to understand each object not as an aesthetic piece of art but rather as a communication technology,” Foias says. “Through the artifacts, we could consider ideas about human souls and the relationship between humans, animals and the divine, asking why a particular object represents a god through a human shape, or why that line between humans and gods is so fluid.”

Wilson Lam ’21 studied three different Zapotec urns dating from between 200 and 700 C.E. “The urns were initially thought only to be funerary vessels,” he says. “But over the course of our research, we discovered they served as offertory vessels during the lives of rulers and only entered the tombs with their users upon their death.
“Ancient Mesoamericans’ beliefs on spirituality differ from Western tradition,” adds Lam, who plans to major in English and anthropology. “They believed multiple souls inhabited each human body, and their perception of the soul was linked to human physicality.”

Each student studied several objects, wrote multiple research papers as well as scripts for an audio tour, and collaborated with classmates to place objects in thematic context. When each object on loan returns to its home institution, it will be accompanied by the students’ research into its history, origin and possible meaning.
“I believe there will be a lasting impact for all three museums, thanks to the student research on these objects about which we didn’t know very much before,” Foias says.
In developing the exhibition “Seeds of Divinity,” she and her students worked closely with theater professor David Gurçay-Morris ’96—who designed it—and with WCMA staff, including Gallerani.

“Visitors can see the dramatic lighting that accentuates each object, hear students bring the objects to life in the audio tour and follow a pathway that leads them to a reimagined Mesoamerican pyramid,” Gallerani says.
Says Lam, “I hope the exhibition lets visitors see the mundane and divine through ancient eyes and reflect upon their own perspectives on the world.”
—Julia Munemo