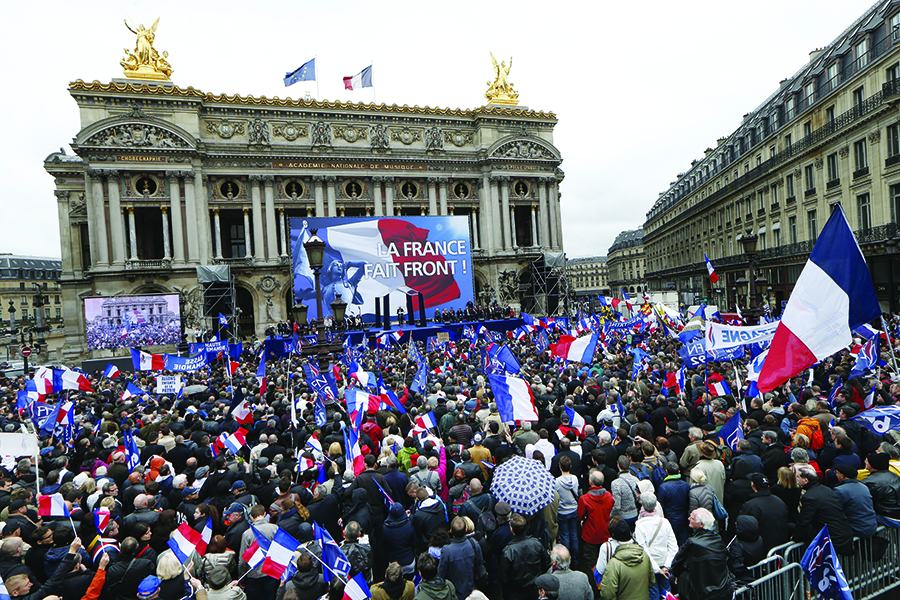 Members and supporters of France’s far-right Front National (FN) party hold French flags as they attend a speech by FN president Marine Le Pen on the Place de Opera during the party’s annual rally in honour of Jeanne d’Arc (Joan of Arc) on May 1, 2015 in Paris. THOMAS SAMSON/AFP/Getty Images

Political science professor Darel Paul’s research focuses on how class-based ideologies manifest in public policies. He applies this lens to the rise of right-wing populism in a new 300-level seminar, Right-Wing Populism. The course compares the U.S. to other countries in order to consider questions about where right-wing populism comes from and if its rise in Europe and America reflects a normal swing of the pendulum—or something else entirely.

WILLIAMS MAGAZINE: Is it easier or harder to teach a course on
right-wing populism since Trump was elected?

WILLIAMS: Do the students have preconceived notions about what
they’re encountering?

PAUL: I have taught some conservative and illiberal thought for several years in my senior seminar. Most students strongly resist it at first, because they are cosmopolitans. Writers who promote particularity—especially national particularity—tend to be automatically suspect.

PAUL: By creating new electives, the department is very good at keeping our curriculum connected to current trends. I developed
this course out of interest in the topic but also because Brexit, Trump and Le Pen all hit the front pages within 12 months of each other. Since there are so few right-wing populists at Williams, I thought it could be an opportunity to learn about a significant contemporary political movement from a rigorous social science perspective.

WILLIAMS: Where do you think right-wing populism comes from?

PAUL: The first half of my course is all about rival answers to this question. The major answers from the left are economic dislocation, mental disorder, xenophobia and racism, and support for authoritarian solutions to political problems. From the right, the major arguments are class struggle and a defense of the nation, national culture and democratic self-government. It’s up to my students to make up their minds based on the best scholarship I can put before them. From there, a comparative analysis helps us see that the Trump phenomenon is not unique. If right-wing populism is happening in countries like Poland and Hungary, which lack significant levels of immigration, or in countries like Sweden and Norway, which have long traditions of gender equality and social democracy, then Trump and the alt-right may not be best explained as simply the latest expressions of long-standing American white supremacy.

WILLIAMS: Are we seeing a normal swing of the pendulum, or is this something else?

PAUL: It’s hard to say, but in this course I entertain the answer that it’s something else. Right-wing populism is not just another swing to the right like we saw in the late 1970s in the U.S. and U.K. or in the 1990s in Europe. It’s a revolt against political pathways, party systems and ideological boundaries dating to the aftermath of World War II. Consider the virtual demise of long-standing socialist parties in France and Germany, the rise of “new parties” to great influence in Italy and the U.K., and the resistance to the European Union throughout much of post-communist Central Europe. Think of public opinion polls showing a loss of faith in democracy among the young, or broad support for technocracy or even a military coup in light of Trump’s election. Whether liberalism can survive is anybody’s guess, but some interesting writers we’re considering think not.

Darel Paul’s third book, From Tolerance to Equality: How Elites Brought America to Same-Sex Marriage, is due out in March with Baylor University Press.