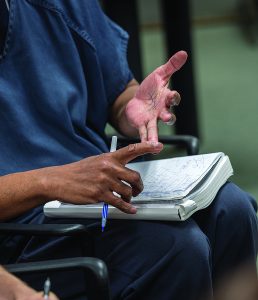 Inmates in the Berkshire County jail are tutored weekly by Williams students.

A new partnership between Williams’ Center for Learning in Action (CLiA) and the Berkshire County House of Corrections offers tutoring in writing, reading and math to inmates planning to take the HiSET high school equivalency exam in preparation for their upcoming release.

The Positive Pathways Partnership (P3) is coordinated by Sharif Rosen, a CLiA assistant director and the college’s Muslim chaplain. He volunteered as a prison chaplain before coming to Williams in 2015, an experience he says showed him how important such programming is to a population he describes as “entirely forgotten.”

“I helped start P3 because I wanted to think about the ways in which we in our community can write new narratives and create venues for hope where you may least expect to find them,” Rosen says. “We have huge, systemic criminal injustice issues in our country, and P3 is one avenue through which we can seek local ways to become part of the change that needs to happen.”

Rosen says the student inmates in the program are a motivated group, eager to get their high school diplomas and begin new chapters of their lives. To help them achieve that goal, Williams student tutors travel to the jail once a week to work in small groups on concepts that will be covered on the HiSET.

Omar Kawam ’20 has been a P3 tutor since the program began in the fall of 2016. “I wanted to ground my college experience within the wider community and to make a tangible difference in someone’s life,” he says.

Kawam took an orientation course at the jail with several other students, including Diana Sanchez ’17. Soon they were driving to Pittsfield every Thursday to work two-on-one with a student inmate who later took and passed his HiSET. “It was great to witness that firsthand,” says Sanchez, a biology major at Williams.

Now a member of the Jesuit Volunteer Corps, Sanchez serves as a re-entry coordinator in Arizona. She is also applying to graduate programs in public health. “I wouldn’t be where I am now if it hadn’t been for P3,” she says. “I walked away from each session feeling like I made an impact, however small it might have been.”

Says Rosen, “When the right students and the right tutors come together, they create very powerful, intangible but potent interactions. Those are the kinds of connections that help inmates, however momentarily, transcend the walls of the institution.”
—by Julia Munemo