s. “We thought monkeys might be less sophisticated than [humans] are, and, ironically, this would make them less prone to certain mistakes,” he says of the study, published in Proceedings of the Royal Society B in September 2017. “But it turns out they use the same fluency mechanism as we do, and they are prone to the same illusions.”

As the new Gaudino Scholar, Susan Engel, senior lecturer in psychology, is exploring processes that lead to deep intellectual change. Beginning July 1, Gage McWeeny, professor of English, will serve as director of the Oakley Center for Humanities and Social Sciences, focusing on the arts in relation to scholarly work in the humanities and social sciences. Also on July 1, Neil Roberts, associate professor of Africana studies, will become the W. Ford Schumann Faculty Fellow in Democratic Studies, working to promote campus dialogue on democracy and civic responsibility.

• When it comes to discourse on issues such as climate change and medical use of stem cells, the line traditionally separating science and politics is 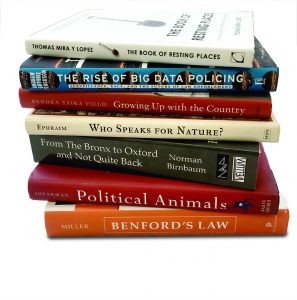 blurred—if not broken. In Who Speaks for Nature? On the Politics of Science, political science professor Laura Ephraim “reveals the roots of scientific authority in what she calls ‘world building politics’” (University of Pennsylvania Press, 2017).

• How is technology revolutionizing law enforcement—and what are the potential threats to the security, privacy and constitutional rights of citizens? Andrew Guthrie Ferguson ’94, law professor at the University of the District of Columbia’s David A. Clark School of Law, answers these questions and more in The Rise of Big Data Policing: Surveillance, Race and the Future of Law Enforcement (NYU Press, 2017).

• The poems in Palm Frond with Its Throat Cut, by Vickie Vértiz ’98, whose writing explores the intersections of feminism, identity and Latino subcultures through everyday beauty, ask readers to view Los Angeles and cities like it “as they have always been: an America of code-switching and reinvention, of lyric and fight” (The University of Arizona Press, 2017). 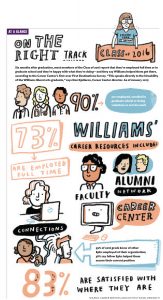