Notes From the Seabird Capital of the World 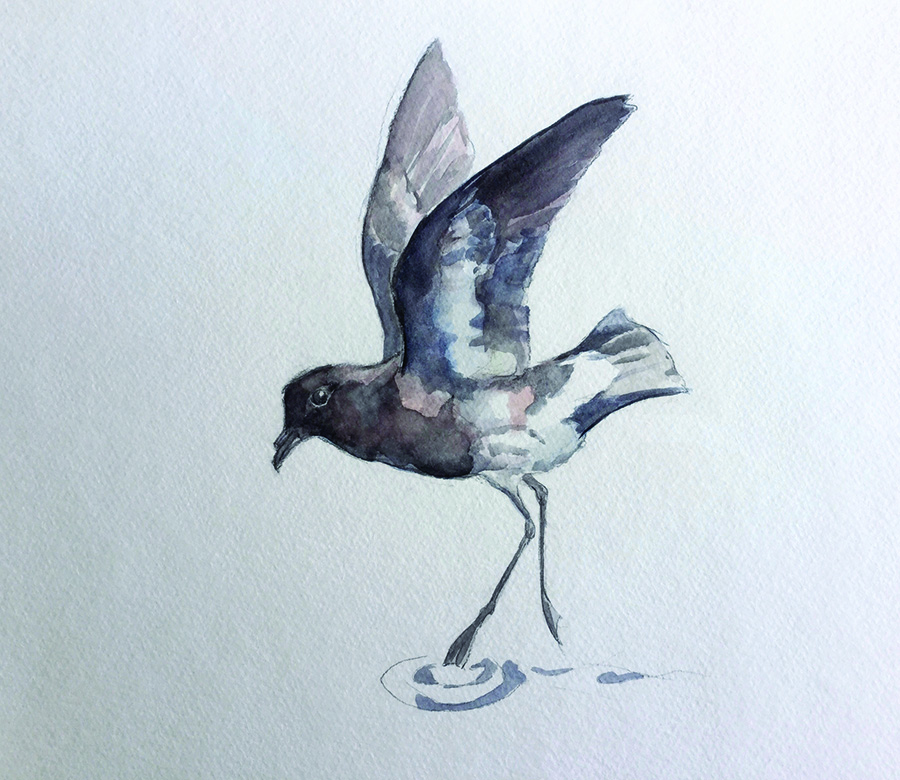 Thought to be extinct for more than a century, the New Zealand storm-petrel has since bounced back, thanks to conservation efforts.

Sketchbook in hand, I brace myself in the stern of a rocking boat. The rugged profile of Little Barrier Island looms on the horizon. In front of me, a small, dark-backed seabird dashes back and forth, chasing crustaceans along the surface of New Zealand’s Hauraki Gulf. It’s odd to be sketching an animal that had been considered extinct for the entire 20th century.

The New Zealand storm-petrel came back from the dead while I was at Williams, but it wasn’t on my radar at the time. Apart from a semester of maritime studies at Mystic Seaport, my life was centered in the forests of Williamstown. As graduation approached, I was finishing an ecology thesis with Hank Art, TA-ing field botany for Joan Edwards and completing an independent study involving a nature journal full of sketches. I didn’t know that a decade later I’d be drawing seabirds from a boat on the other side of the world.

As a Fulbright-National Geographic Digital Storytelling Fellow in New Zealand, I’m writing and illustrating stories about the lives of petrels, penguins, albatrosses and other birds that make their living from the ocean. I’m telling of the staggering losses they suffer as a result of human activities and of the ways New Zealanders are working to save them and the ecosystems they inhabit.

By paying attention to seabirds, we benefit entire landscapes and livelihoods.

A lot happened between Williams and now. I drove a lobster boat in Maine, camped on an uninhabited Galápagos island researching boobies, taught piano lessons and was a pastry chef. I squeezed in sketching when I could. Later, aiming to better integrate art and science, I got a science writing degree at MIT and began writing and illustrating stories for the Cornell Lab of Ornithology and Bowdoin College. When I found a job managing communications for the American Ornithological Society, I began working remotely while traveling the world.

Meanwhile, I was applying to this storytelling fellowship—multiple times. I wanted to cover a globally urgent topic that brought together different threads of my experiences and interests. I settled on birds, the ocean and conservation.

Seabirds are among the world’s most endangered animals. Many spend years at a time living within, upon and above vast oceans, showing amazing feats of athleticism and adaptations to marine life. All seabirds have to come to land to nest, so ecologically they connect land and sea. And, being highly sensitive to changes in the environment, they’re coal-mine canaries for the ocean. By paying attention to seabirds, we benefit entire landscapes and livelihoods.

The country for this storytelling project had to be New Zealand. Surrounded by rich waters and isolated for 80 million years with no land mammals, it was covered with breeding seabirds until humans started showing up in recent centuries—bringing with them threats like invasive predators and, later, intensive fishing operations that kill birds accidentally. Its seabirds are the most diverse in the world as well as the most threatened.

New Zealanders are making extraordinary efforts to turn the tide of seabird decline. They navigate queasy ocean passages and all-but-impassable terrain to study and protect birds at their breeding sites. They train conservation dogs to sniff out nests. They use homemade instruments to gather data and develop their own gear adaptations to catch fewer birds on fishing lines. They bring whole communities together to build predator-proof fences around threatened bird colonies.

When an extinct storm-petrel was reported flying around in the Hauraki Gulf in the early 2000s, it was an astounding win for Kiwi ingenuity and global conservation. This little bird managed to hang on at undetectably low numbers for well over a hundred years. As invasive predators started coming under control, it bounced back, reaching high enough numbers to be noticed.

Next, I’m off to sketch the elusive storm-petrel on its breeding grounds, the jungle-covered Little Barrier Island, where researchers tracked down the first nest burrow only a few years ago. There, on steep slopes inhabited by plants and animals found nowhere else, people continue to help this miracle bird on its precarious path to recovery. And, there, my story will keep unfolding.