Notes from half a century of Winter Study

A singular Williams experience, Winter Study is a time for students and professors alike to stretch their intellectual and creative muscles, free from the distraction of other courses or the pressure of being graded. They can use the time to focus on an interest cultivated during the regular academic year, or they can pursue something entirely new. In celebration of the program’s 50th anniversary, we’re featuring highlights of Winter Study past and present. As you’ll see on the following pages, the experience can be transformative. You can share your own experiences via social media using #WilliamsWinterStudy.

1 The course Glass and Glassblowing has been a staple of the Winter Study curriculum since the 1970s (below, left). Though Jay Thoman ’82, Williams’ J. Hodge Markgraf Professor of Chemistry, never took the course himself, he has taught it nearly every January for the past 20 years, including in 2013 (right). Students learn the chemistry behind the process and proper techniques before they don didymium glasses and fire up their torches. They also write papers on topics such as fiber optics and uses for glass during the Roman Empire. 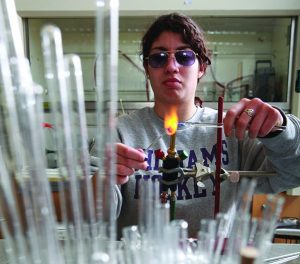 2 Over the decades, the course Composing a Life and variations of it have helped students get a sense of how to mesh their career and family aspirations.

3 For the 1977 course The Future of Mount Hope Farm, students assessed the property’s potential and presented a plan to the college.

4 Winter Study is the perfect time for an immersive, collective reading experience, with courses over the years including Reading War and Peace Together, Finishing Gravity’s Rainbow and Reading James Joyce’s Ulysses.

5 An airy space in Spencer Studio Art Building was home to How to Be a Medieval Stone Mason, taught in 2014 by Marcel Müller, who has worked on some of Europe’s most important Gothic churches. Student apprentices spent three weeks chipping away at large blocks that would form the pieces of a Gothic rose window.

7 In 1968, The Economic Impact of Technology took a page from Williams’ tutorial system, with students teaching and learning from each other about the relationships between man and machine.

8 Students spent 10 days in Paris in January 2018, observing African diasporic performances for the course Paris Noir: Performances in the City of Light.

9 No money changed hands, but students learned about games of chance through lectures, problem sets and lab practices on roulette and slot machines in the 1976 course How to Gamble if You Must.

10 “I was able to step outside my major (chemistry and pre-med) and take a course on music. This led to my taking Introduction to Music and, later, a course called Symphony.” —Christopher C. Baker ’70, who in January 2017 taught ethics in clinical medicine.

11 Working with a five-octave set of English handbells, an ensemble of novice students learns and performs a repertoire ranging from the classics to pop music in the frequently taught Handbell Choir. 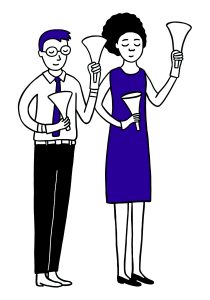 12 Finding an alternate energy source—in this case, continuously weighing a variety of woods as they burned in a stove—was the subject of the 1975 geology/physics course Energy and the Environment.

13 Students in Steven Miller’s The Mathematics of LEGO Bricks learn mathematical concepts and apply them to building a variety of structures, including a 3,152-piece Star Wars Super Star Destroyer in 2014 and, more recently, a large suspension bridge across the Great Hall in the Paresky Center. 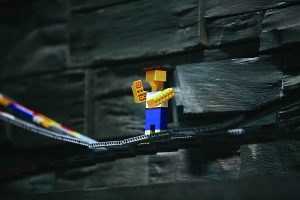 14 With math professor and baker Alison Pacelli, students in recent years have learned The Art and Science of Baking while blogging about—and eating—their creations.

15 For many years, the Berkshire Farm Center Internship has connected Williams students with at-risk teenage boys living in a residential facility in New Canaan, N.Y.

16 A precursor to the Williams-Mystic Program was American Maritime History, held in 1977 aboard the Joseph Conrad at Mystic, Conn.

17 For Re-Editing The New York Times, students in 1980 re-wrote the previous day’s front pages as if historians would be reading the news a century later. 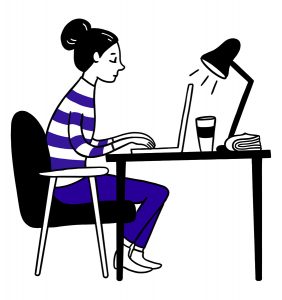 18 Designed for students with little or no experience in theater, 1978’s The Making of a Production: Chekhov’s Three Sisters was a crash course in backstage and front office work.

19 Yes, there was basket weaving! The 1980s course New Basketry sent students out into the frosty woods to gather materials for use in traditional containers and modern sculptures.

20 Donald Gregg ’51, an expert in Korean affairs and 30-year veteran of the CIA, shares his expertise and experience with Williams students in the course The CIA and the Politics of Intelligence.

21 Back in the U.S.S.R., a three-week tour of Moscow, Leningrad and Kiev, included meetings with Soviet students, theater performances, a troika ride and a New Year’s party to ring in 1980. 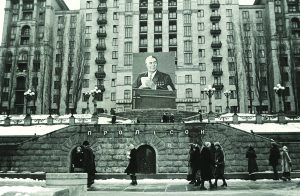 22 Botany, tracking and viewing wildlife, and looking at how winter has shaped natural and human environments were all part of the ’90s course Winter?! 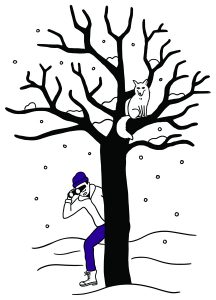 23 Now in its 30th year, Williams in Georgia is a unique partnership with the Republic of Georgia in which students live with English-speaking families and engage in three-week internships in fields of their choosing.

24 In addition to studying the resurgence of the left in the U.S., students in the 2018 course Our Movement Moment took part in their own activist work.

25 The Williams College Museum of Art’s Rotunda has been home during Winter Study to everything from a Moroccan-style riad (for the 2017 course Public Art and Climate Change: Ghana ThinkTank and the Making of a Museum Installation, below, left) to a Rube Goldberg-esque sculpture (for 1972’s Rube Goldberg Extravaganza, below, right). 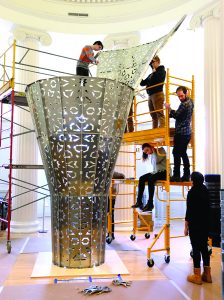 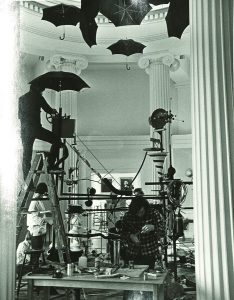 26 Robert Kent ’84 wanted to take Aikido: The Discipline of Moving Zen (left), taught by religion professor John Eusden during Winter Study in 1981. But “78 students signed up for 20 spots, and I didn’t make the cut,” Kent says. He went on to study aikido in Japan and now returns to Williamstown each January to teach the practice himself. 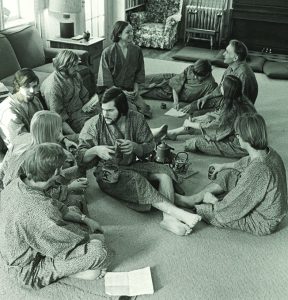 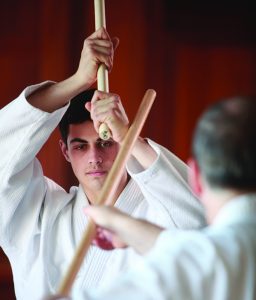 27 For 2017’s Humans of the Berkshires, students ventured into the community to conduct interviews with and take photographs of people (and cows). 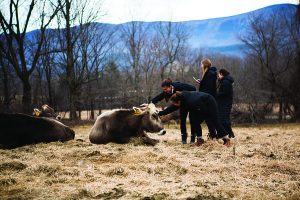 28 Is the set of all sets that do not contain themselves a member of itself or not? And why do philosophers love that question? Those and other head scratchers were the focus of the 2000 course Philosophical Puzzles.

29 The 1975 journal Black Sun was an independent project by four seniors to “articulate, define and disseminate their realizations of the Black experience.”

30 Mars! A Passion for the Red Planet introduces students to “Earthbound explorers and their robotic surrogates caught in the … planet’s irresistible pull.”

31 In The Fun of Formulating a National Energy Policy, students in the ’80s developed two national energy plans: an ideal one and a politically practical one.

32 For Development of the Printed Book, taught by Chapin Librarian Richard Archer in the late ’70s, each student had to analyze a book from the collection. It recently surprised Guy Creese ’75 to learn that a French edition of Lancelot that he studied as a student is worth $80,000 today.

33 In the ’70s, students took Scuba Diving at Muir Pool, a respite from frigid temperatures—unless they left with wet heads.

34 “The experience of working with primary documents from the Chapin rare books library … seduced me into pursuing a professional career as a historian.”Sarah Barnes ’84, on The Historian as Detective, taught by history professor Charles Dew ’58.

35 A longtime staple of the physics curriculum, Automotive Mechanics—shown in 1975 (left) and the late ’90s—involves lectures, demonstrations and hands-on auto repair at Flamingo Motors in Williamstown. Students studied major systems in depth—including fuel injection, power trains, lubrication and cooling, and brakes and suspension. 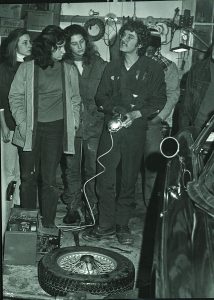 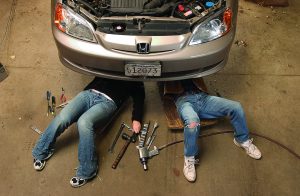 36 North Adams Hospital was a training ground for Williams students, who assisted in the operating room, learned radiology techniques and shadowed doctors during the early years of Winter Study. 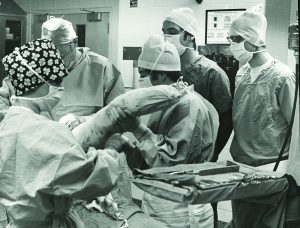 37 Artists and scientists alike are drawn to Wood and Woodturning, in which students learn the craft—making bowls, pens and toy tops—and delve into topics such as metallurgy, moisture, wood movement and forestry.

38 From the Classical to the Islamic Worlds in Jordan and Syria, taught in 1998, was an investigation into the archaeological and architectural remains of the classical, late antique and Islamic periods in the area of the greater Levant.

39 WCMA offers time and space for close work with objects, whether students are helping to put together an exhibition in Mapping the Museum (2016, left) or taking part in Studies in Chinese Painting (1968, right). 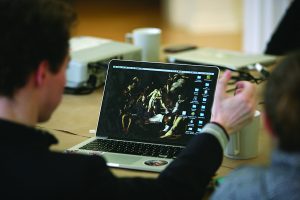 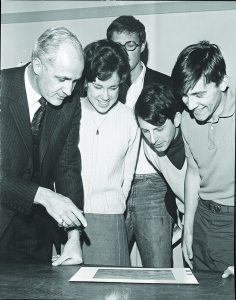 40 Ethnographic Field Research involved a trip to Roatán, Honduras, in 1968 to study culture, anthropology and public health. To participate, students had to take a non-credit seminar in the fall.

41 The 1998 course Broken Symmetry and Modernistic Despair asked, “How do we know anything?” Students answered by applying physics, math and computer science theory to issues in art, literature and the humanities.

42 After experimenting with scenes from Jean Genet and Mandell Weiss and improvising with original and nontheatrical material, students made a film on the subject of cruelty as part of 1968’s The Theatre of Cruelty. 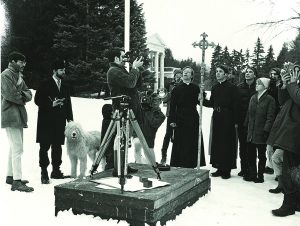 43 War Games and courses like it, in which students use board games, role playing and computer simulation to re-enact key moments in history, frequently appear in the Winter Study catalog.

44 The Contemporary Singer-Songwriter, a Winter Study staple taught by local songwriter Bernice Lewis, teaches everything from song structure to concert publicity and culminates with a public performance.

46 Students teamed up with ’76 presidential primary candidates to handle publicity and organize rallies for The Theory and Practice of Campaigning: The Massachusetts Presidential Primary, taught by James MacGregor Burns ’39.

47 “I took Sexual Politics as a freshman in 1977, thinking I would hear about women in politics—nope. Rubyfruit Jungle and more! It was great.” —Julia McNamee ’80

48 Students took turns as models and photographers, using a 4×5 view camera, in 2018’s Creative Portraiture in the Darkroom.

49 In Principles of Effective Leadership, taught for years by Bill Simon ’73, students get to know their guest speakers over breakfast or dinner before introducing them to the class.

50 The perennial Light and Holography, which has evolved since its introduction in the 1970s, makes use of seven well-equipped holography darkrooms. 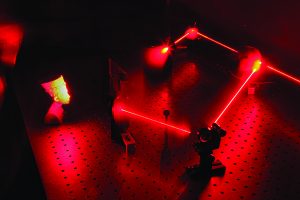