The New Shape of Hawai‘i 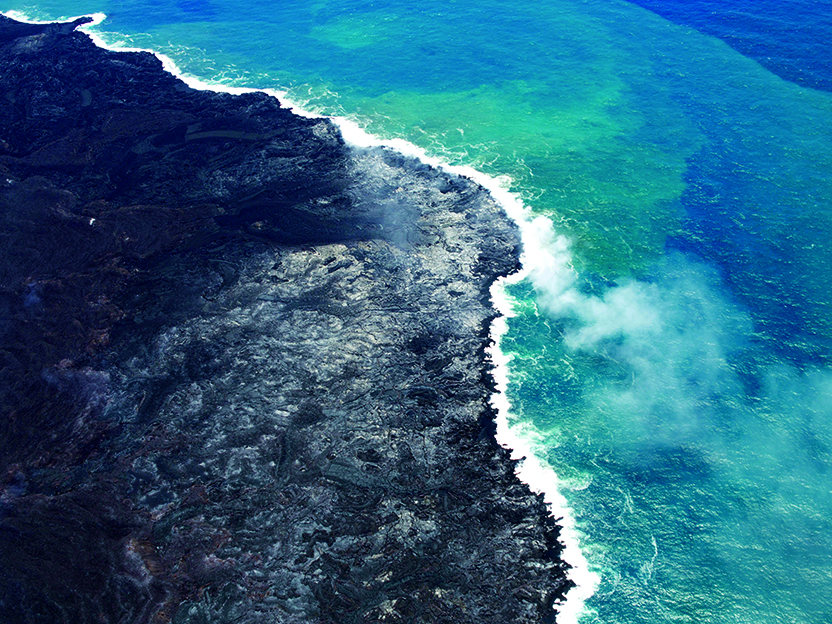 Pele, the Hawaiian goddess of fire, is both creator and destroyer. She inhabits the Halema‘ūma‘ū Crater on the top of Kīlauea Volcano, and recently her work has felt almost exclusively destructive.

Kīlauea Volcano reaches to 4,000 feet above sea level and has been active for many years, although for the most part Hawai‘i eruptions are considered “friendly.” They are not so much violent as dynamic. The mountaintop is not going to explode, and so people in Hawai‘i can find a safe spot from which to watch them fountain and flow. The experience of witnessing Pele’s power is unforgettable.

It is painful to lose these places we love. … But Pele’s hand has reshaped our coastline with stunning, shiny new black sand beaches, too.

I first saw this in 1959, when I was 4 years old. Kīlauea Iki, a smaller crater next to Halema‘ūma‘ū, suddenly erupted in a lava fountain that shot 2,000 feet into the air. My parents woke us all in the middle of the night and piled us into the car to go up the mountain to see it up close. I remember sitting on the edge of the crater in the dark, the heat from the lava on my face and the cold air on my back. The roar, the mesmerizing molten fire, the power of the raw emergence, forged my soul and my life’s work. In Hawaiian chant: ‘Eli ‘eli kau mai: Let awe possess me.

We have lived through many eruptions since then. In 1987, lava covered over my favorite freshwater spring, Queen’s Bath, a magical spot special to me since childhood. That night, we watched and waited in angst as the molten flow approached. Ke nome mai la ‘o Pele: Pele comes munching along. The water slowly evaporated into a cloud, and the place was gone. But where did this beloved place go? Years later, I put it in song: E ‘imi au iā ‘oe i ka hōkū i ka mālamalama: I will look for you by starlight.

In time, new lava transforms again, and this is why we say Pele is also a goddess of creation. The beautiful ‘ōhi‘a tree, the foundation of the Hawaiian rain forest, is the first tree to colonize an area after the lava cools. In time a scrub forest begins to grow on the black rock. Sometimes lava flows around a higher area, leaving ancient forest in an oasis of sorts, called a kīpuka.

Starting in May of this year, Kīlauea Volcano became decidedly less friendly. While of course over the centuries eruptions have destroyed villages and wreaked havoc on our natural resources, few in modern times have been as long-lasting or destructive as the current Kīlauea eruption. Halema‘ūma‘ū Crater at the summit shook with dozens of earthquakes a day, some quite strong, and ash clouds exploded 10,000 feet into the air. Twenty-five miles away, fissures opened up along roads and in forests, and molten lava poured out of the ground, fed by a lava tube running underground all the way from the summit to the coast. Lava fountains and flows destroyed more than 700 homes and farms, displaced thousands of people and completely wiped out some of Hawai‘i’s most treasured natural resources.

There has been no safe spot from which to watch Pele’s power this time, and we followed the destruction remotely and by air for more than three months. We lost half of a forest reserve to the lava—an area that serves as refuge for native birds—and marine life over miles of coast. We lost Wai‘ōpae, a marine life conservation district with lovely tide pools and reef fish, where people loved to snorkel. We lost Kapoho Bay, with homes and ancient fish ponds and beautiful corals. And we lost Green Lake—WaiaPele, the Water of Pele—a wahi pana, or a storied place, a place of legends of Pele. This kīpuka had a lake in the center, and as the lava flow approached, I thought it would pass by. But almost of spite, it seemed, the lava shot a side arm out and covered the lake entirely. As of August, the eruption had paused, and we are now watching and calculating Pele’s impact.

It is painful to lose these places we love and have worked so hard to protect. But Pele’s hand has reshaped our coastline with stunning, shiny new black sand beaches, too, and as soon as the lava cools enough and people can return home, we will begin to discover the new shape of Hawai‘i Island.

Suzanne Case ’78 is chair of the State of Hawai‘i’s Department of Land and Natural Resources. Born in Hilo and raised on Hawai‘i Island and in Honolulu, she received a law degree from UC Hastings College of Law and worked in land law before joining The Nature Conservancy. In 2015 she was appointed by Gov. David Ige to lead the department responsible for managing public lands and water resources. Case oversees nearly 1.3 million acres of forests, parks, beaches and coastal waters. For much of this year her work has focused on the eruption of Kīlauea Volcano on the eastern side of Hawai‘i Island