Threats to the Republic 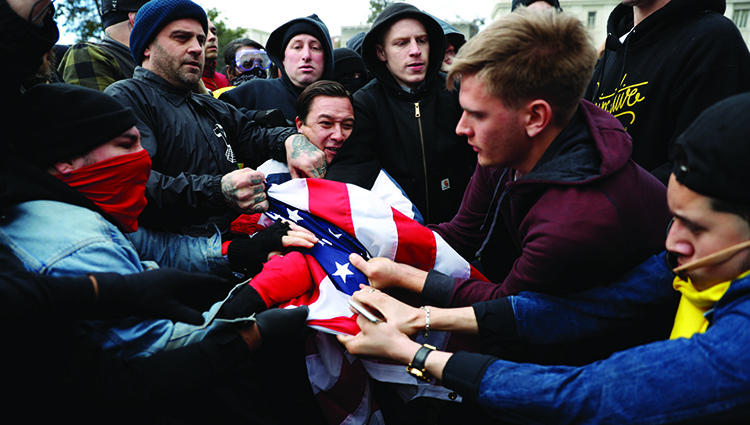 Demonstrators for and against President Donald Trump at a March 4, 2017, rally in Berkeley, Calif.

A new course developed by political scientists Justin Crowe ’03 and Nicole Mellow provides students with tools for deciphering extreme political rhetoric in an America they say is out of sorts.

How worried should we be—and what precisely should we be worried about—as a new era of American leadership begins?

That’s one of the central questions political scientists Justin Crowe ’03 and Nicole Mellow posed to students in their new spring-semester course, Threats to the Republic: Politics in Post-Obama America.

Crowe, who studies the Supreme Court and the Constitution, and Mellow, who studies American political development, began putting together the course in late 2015. Their aim: To examine the issues facing President Barack Obama’s successor in what their course description states is “an America that is out of sorts.”

“In the year before the election, we were struck by the sense of peril conveyed to the public by actors on all sides in the hyper-partisan political order,” Mellow says. She and Crowe set out to provide students, particularly first-years and sophomores, with useful tools to navigate a world in which, “no matter where they turn, the message is that destruction was around the corner—whether it’s environmental destruction, terrorist attack, economic catastrophe, a threat to liberties or moral decay,” she says.

Crowe adds, “A threat to the republic is different from a threat to a citizen or group of citizens. We wanted to look at threats to the very fabric and sustenance of American government. To understand that, we go to the Constitution.”

Each course unit was organized around a different constitutional aspiration and the threats posed to it. For the first unit, Disunion and Justice, students focused on how racial animosities and immigration threatened the constitutional aspirations of forming a more perfect union and establishing justice. In another, Foreign Entanglements, students compared terrorism to earlier foreign threats and considered the ways in which political actors leveraged them.

For each unit, teams of students prepared presentations about readings and discussed “what we should fear and how the presidential administration was responding to those fears,” Crowe says. “Did the administration exacerbate those fears, mollify them or privilege one set of fears and threats over another?”

Students also explored how events unfolding in each day’s headlines—such as the travel ban proposed by the Trump administration, free speech on college campuses and wealth inequality—were considered in the past.

“The travel ban, for example, was not the first time the American government restricted who could enter this country,” Mellow says.

The last unit, Catastrophe and Outbreak, addressed the constitutional aspiration of ensuring domestic tranquility and examined threats from pandemics and environmental disasters. The professors ran a simulation set in a fictional Louisiana town suffering from seawater infiltration and the breakdown of infrastructure. The question on the table: Should the town spend a FEMA grant on relocating its citizens or on rebuilding?

Students divided into groups representing various stakeholders. Fred Wang ’20 acted as a town councilman, representing constituents who were against the plan to relocate. Despite residents’ opposition, he voted for relocation, which he considered to be a better solution in the long term.

“The simulation helped me realize how public officials can get caught between appeasing their constituents and making the choice that they themselves see as correct,” Wang says.

Says Mellow, “The exercise demonstrated how politics and clashing interests can yield sub-optimal outcomes, even when the situation is dire and there is a clear policy solution.”

Crowe says he hopes the course helped to “make the students more astute observers of politics and more sophisticated thinkers about the dilemmas of our time.”

Adds Mellow, “Many observers of today’s politics say this is a moment for a watchful public. Our aim was to help students be thoughtful in that task.”