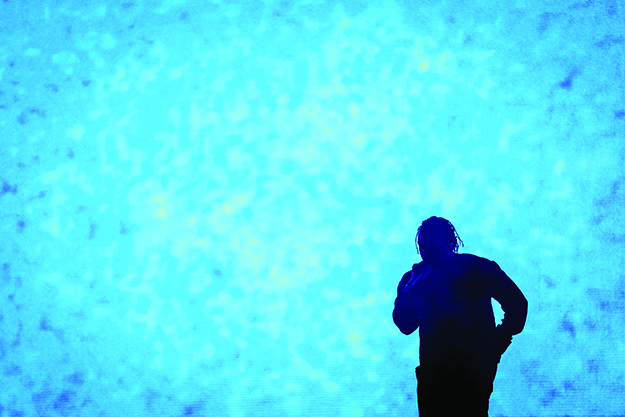 When assistant professor of Africana Studies VaNatta Ford heard the new Kendrick Lamar song “FEEL,” she immediately thought of the old spiritual “Sometimes I Feel Like a Motherless Child.” Both the spiritual, from the era of slavery, and the rap song, which came out in 2017, use repetition to reinforce a message about our deepest feelings, fears and worries.

“The idea behind both songs is that no one is taking care of the singer,” Ford says.

Last spring, Ford taught the course Giving God a Backbeat: Rap Music, Religion and Spirituality. Her students learned to analyze rap music much as one analyzes poetry, considering the song’s structure, rhyme scheme, use of metaphor or simile, mood and social or religious context.

“My students come to see that hip hop didn’t emerge from a vacuum,” says Ford, who has been at Williams since 2014 and teaches courses on black religious traditions, colorism, and race and social media. “Hip hop emerged out of social unrest, poverty and a racist United States framework that was, among other things, displacing black and brown folks from their homes and taking art programs out of schools.”

Ford says that rap music is a form of resistance in much the same way as spirituals, which were born on the slave plantation. In both contexts, Ford asks, “What does it mean to be in a society that does not value you, yet you’re still able to create such art?”

Ford, who earned an M.Div. in theology and a Ph.D. in rhetoric from Howard University, says rap music and spirituals both give people something they need. “Music becomes a place for spiritual and religious refuge, and rap music today does something for young people that is similar to the black church traditions that some of our parents and grandparents experienced. We can find our spirituality in a lot of the music we listen to.”

Ford makes the following comparisons between “FEEL” and “Sometimes I Feel Like a Motherless Child”:

The first four lines of “FEEL” are:

The first four of “Sometimes I Feel Like a Motherless Child” are:

Says Ford: “Repetition as a device in spiritual songs indicates the intensity of the feeling. The lines in the spiritual don’t mean that the singer doesn’t have a mother—it means the singer feels he or she is not being cared for. In the same way, Lamar is expressing a lack of connection. He’s not saying “I’m not praying,” he’s saying no one is praying for him, no one is caring for him.”

Looking at this section from “FEEL”:

Ford says that the lyrics “remind me of the line ‘Sometimes I feel like I’m almost done’ in ‘Motherless Child’”:

“If this isn’t in the genealogy of a spiritual, I don’t know what is,” Ford says. “It’s a genealogy of the lament but also a petition to a divine being. This is the idea of being motherless, that nobody’s taking care of the singer or of Lamar, nobody’s comforting him. Nobody’s praying for him.”

Later in “FEEL,” Lamar writes: “But nothin’ is awkward, the feelin’ won’t prosper.” Says Ford: “It’s interesting that Lamar uses the word ‘prosper‘ here. There’s a scripture that says no weapons formed against me shall prosper.”

“Sometimes I Feel Like a Motherless Child” ends with:

Says Ford: “‘A long way from home’ ties the songs together for me. For Lamar, home is the idea of prayer, peace of mind, or spiritual or religious solitude that he’s lacking. The singer of the spiritual feels the same way. There’s no reconciliation. We find the same thing in the psalms and other lamentations in the Bible, specifically in Judeo-Christian faith traditions among black folks. The message is: ‘I might not be able to reconcile this, but I’m going to tell you how I feel.’”