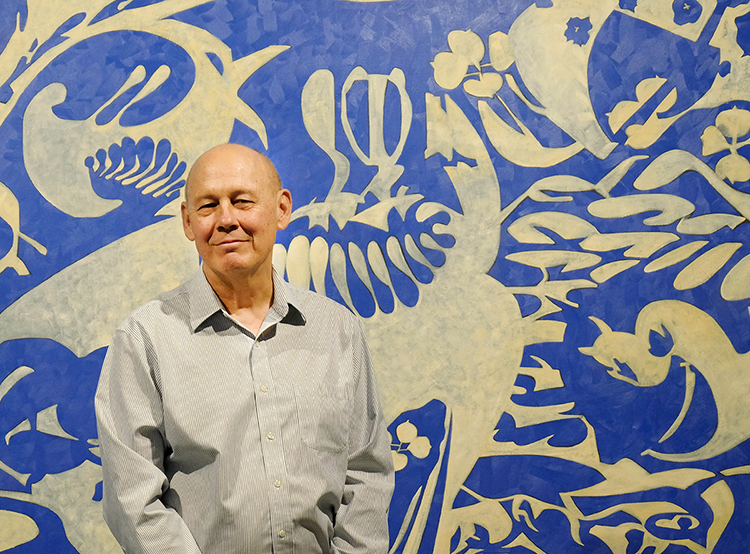 “The Forests of Antarctica,” a new painting series by Williams art professor Mike Glier ’75, addresses the environmental implications of place and globalism, “a tremendous stretch of perception and experience that defines our time,” he says. Glier’s process begins en plein air, or outdoors. His 2007-2008 collection of paintings, “Along a Long Line,” told the story of a yearlong trip along a single line of longitude. His next project, “Antipodes,” begun in 2009, brought him to locations on opposite sides of the globe from one another. While working on “Antipodes” in New Zealand in 2012, Glier got the inspiration for “The Forests of Antarctica.” “It was very windy there, and despite the rocks I’d put to hold down my easel, the wind kept picking my panel up and tossing it,” he says. “The wind was winning, so I decided to draw it.” He was encouraged by the unexpected results of drawing something that is invisible but can be felt. So, he says, “I began to include sound and smell and touch as sources.” That was in 2013, and since then he has made hundreds of sketches based on the things he can sense as he draws in one of the four forests he’s come to know over the years in the Berkshires, along the coast of northern Maine, in the central mountains of New Mexico and on the island of St. John. When he returns to his Williamstown studio, he uses the sketches to make compositions whose shapes suggest but don’t fully describe animals, plants, watercourses and outcroppings. “Sometimes the positive form is the image, and sometimes the negative form is the image,” he says. “The paintings depict a possible distant future where the temperature is warm enough to support exuberant life in Antarctica, but it’s life we can’t quite recognize.” —Julia Munemo

Each form in these pictures is self-contained, but since it shares edges with other forms, the integrity is dependent on its neighbors. Like an ecosystem, the forms are at once discrete and dependent, and like things glimpsed while hiking, they flicker into consciousness and dissolve into space. When drawing and painting out of doors, there isn’t a break between thinking and doing. In the best moments there is no lag between the movement of the sun and the wind and response of the brush and the knife. Stimulus and response becomes a single thing, and the experience is one of feeling very connected with the subject. It’s a delightful state of being in which what is inside gets thoroughly mixed up with what is outside. This loss of consciousness during moments of deep engagement is common and familiar to anyone who has taken a deep dive into reading a book, cooking a meal or making love, only to be surprised at just how far away one has been when swimming back to consciousness, breaking the surface with a shake of the head to say, “Oh, my goodness, where was I? I lost track of time.” These paintings are a record of those kinds of moments and a demonstration of the human potential for empathy. I hope these landscape pictures advocate for responsive and respectful engagement between people and the environment [and] advocate for intimacy with what’s outside. If there’s any sort of environmental agenda here, if there’s anything useful to what I’m doing culturally, it’s about modeling a relationship with what’s outside that is reciprocal.