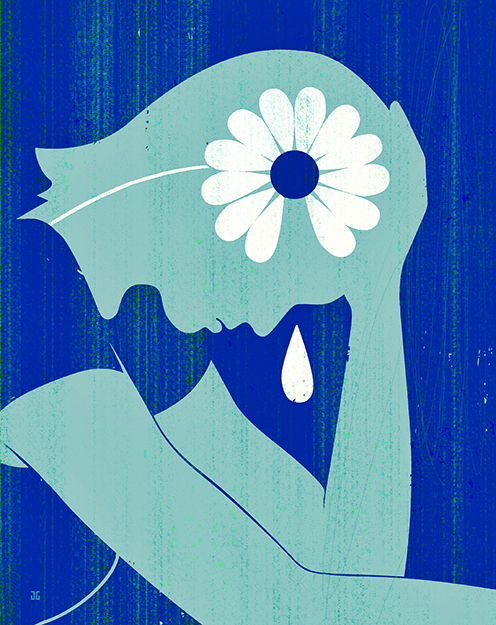 Associate Professor of Psychology Catherine Stroud recently completed a three-year longitudinal study examining the development of depression in adolescent girls. With the help of Williams undergraduates—whom she trained in interview and coding techniques—Stroud collected data about girls’ stress levels, their responses to stress and whether their responses can correlate with the development of depression.

WILLIAMS MAGAZINE: How did you set up your study?

CATHERINE STROUD: I knew from the outset that I wanted to take an integrative approach to trying to understand how depression develops. We followed 132 mother-daughter pairs over three years, starting when the girls were approximately 12 years old, before symptoms of depression typically emerge. We investigated the interplay of biological factors, interpersonal relationships and psychological factors, such as emotion regulation and personality. For example, we collected girls’ saliva to index cortisol levels, the main stress hormone in the body, as well as genetic factors involved in sensitivity to stress. We also interviewed the girls and their mothers about stressful experiences and coded the severity of those experiences to measure stress levels in the most objective way possible. And we examined aspects of girls’ family environments and their use of different emotion regulation strategies, such as rumination—the tendency to get stuck in a repetitive cycle of negative thoughts.

WILLIAMS: What did you discover?

STROUD: We found that girls who experienced higher levels of adversity in childhood had more symptoms of depression and anxiety as adolescents. Also, girls with certain genetic factors were more susceptible to stress in their relationships, such that they experienced greater depressive symptoms under high stress levels but lower depressive symptoms under low stress levels. And girls who ruminated more generated higher levels of stress in their relationships, such as conflicts and romantic relationship break-ups, which likely increases their risk of developing depression.

WILLIAMS: What surprised you about your findings?

STROUD: I was surprised by the effect parenting can have on the development of depression. We examined the ways in which mothers helped their daughters cope with stressful life events, and we found a connection between mothers’ coping suggestions and daughters’ tendency to ruminate. Adolescent girls tended to ruminate more when their mothers suggested using distraction or avoidance to cope with stressful situations. In contrast, the girls tended to ruminate less when their mothers suggested using problem-solving techniques or accessing social support. In other words, providing suggestions to face the stressor may have helped adolescents to resolve the problem, allowing them to let go rather than get stuck in negative thoughts.

WILLIAMS: What advice do you have for girls and their parents?

STROUD: Adolescent girls are going to face stress in their lives, and we need to help them use adaptive coping strategies to promote their resiliency in the face of such stress. One way to do this is by coaching parents to encourage their daughters to engage with the problem as well as seek the support of others rather than using strategies such as denial and distraction. But it’s important to keep in mind that my work to date has not attempted to tease apart which factor is the cause and which is the consequence. It may be the case that girls who engage in greater rumination are more likely to elicit disengagement suggestions from their mothers, who are only trying to help them to stop negative thought patterns.