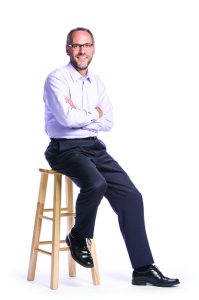 The Williams student of today must learn to thrive in an ever-shifting world. Members of this generation will probably hold more jobs over their lifetimes, live in more places and encounter people from a greater variety of backgrounds than many of us imagined possible at their age. Yet this same generation is in many ways being resegregated. They’re growing up in neighborhoods and schools walled off according to race, religion and class, and they’re steeped in technologies that segment the world according to “friends,” “likes,” and the notion that “if you like A, you’ll probably also like B.”

Our students keenly feel the chaos of these competing centrifugal and centripetal forces. Even the controversies over campus speakers and “safe spaces” can be understood as an expression of their efforts, not always successful, to grapple with these tensions. Williams has a long record of preparing students to face life’s great challenges. This issue of the magazine depicts some of the ways we’re thinking and teaching about diversity and complexity, two defining themes of the current era. The socioeconomic diversification of our student body is front and center in “Begins the Quest.” Between 2004 and today, the share of Williams students hailing from families whose incomes were in the lowest 60 percent nationally grew from 18 to 26 percent. In addition to our deep investment in financial aid, much of this success is attributable to our partnership with QuestBridge, which identifies talented, low-income students (who often lack access to college preparation) and matches them with elite schools like Williams. We graduated our 400th QuestBridge scholar in June, and to mark the occasion the story revisits our first class of scholars, who graduated in 2009. Their stories show the multiple benefits of our work to both increase individual access to education and create an environment where every student can learn from encounters with peers from backgrounds quite different from their own.

“The Face of Sacrifice,” an interview by political science professor Ngoni Munemo with anthropologist David Edwards and historian Magnus Bernhardsson, demonstrates how conversations among people with diverse perspectives can yield powerful insights. Dave’s new book on the evolution of martyrdom in Afghanistan—and his and Magnus’ course on “the origins, ideology and organization of the Islamic State”—go a long way toward helping students understand a complex, disruptive global movement.

These stories, along with “Making Friends with the Enemy,” about the dangerous Cold War friendship between CIA operative Jack Platt ’58 and his Soviet counterpart Gennadiy Vasilenko, demonstrate some of the many ways Williams helps students understand the forces that shape their world—and how those forces shape Williams lives, in turn. After all, the world isn’t getting less complicated. We always have more to do to prepare students for success in challenging circumstances.

Fortunately, Williams is here to teach them, and we always will be.