The Lesson of a Broken Egg 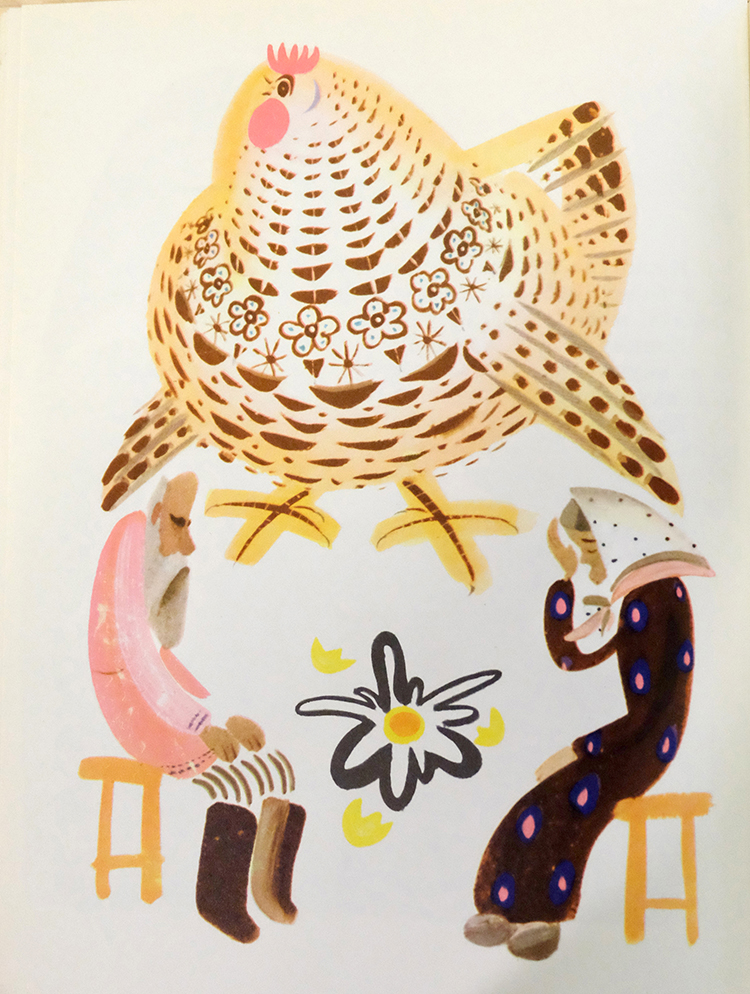 An illustration of the tale of Kurochka Ryaba, or Ryaba the Hen, from Russkie Skazki pro Zverei (English translation: Fairy Tales about Animals). Illustrated by Lev Tokmakov. Moscow, 1973.

In her exploration of Russian culture, Darra Goldstein amassed a collection of books that paint a vivid picture of life in Soviet Russia. On the occasion of her retirement as the Willcox B. and Harriet M. Adsit Professor of Russian, she is donating more than 100 volumes to the Chapin Library. Her collection includes Russkie Skazki pro Zverei (Fairy Tales about Animals), illustrated by Lev Tokmakov and published in 1973. Tokmakov illustrated nearly 300 children’s books and made count-less paintings and lithographs of animals. Among the stories he depicted was that of Kurochka Ryaba, or Ryaba the Hen (above). Ryaba comes from “ryabaya,” which means spotted or speckled. The common telling of the story is that an old couple owned a hen named Ryaba who laid a golden egg. The old man tried to crack the egg open but couldn’t. The old woman tried to crack it open, but she couldn’t break it either. Then a mouse ran by, knocking the egg to the floor with its tail, and the egg broke. The old couple cried. Ryaba told the couple: “Don’t cry. I’ll lay you a new egg. Not a golden one, but a simple one.” Entire articles have been written about the meaning of the story, and Goldstein offers her own interpretation. “As one of the earliest tales told to Russian children, it teaches them to value what is simple and real in life, for those are the things that nourish and sustain us, rather than riches we haven’t earned, which can disappear as suddenly as they appear,” she says. “Like the larger works of Russian literature, this little story holds many layers of meaning.”