The Political as Scripture 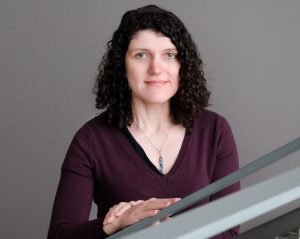 The first time Jacqueline Hidalgo read The Spiritual Manifesto of Aztlán, she was an undergraduate at Columbia University taking an introductory course in Latino/a studies. The document was used to demonstrate a pivotal moment in the history of the Chicano Civil Rights Movement, which sought to achieve Mexican-American empowerment. Yet, as a religion major, she was surprised it wasn’t considered a religious text.

“It’s got the term ‘spiritual’ in its title, it evokes the mythical homeland of the Aztecs, and there is language throughout about destiny,” says the associate professor of Latino/a studies and religion. “I now know interpreting such rhetoric as primarily political evidences the blurred relationship between the political and the spiritual within Chicano and Chicana identity.”

That complication is at the heart of Hidalgo’s new book, her first (Revelation in Aztlán: Scriptures, Utopias and the Chicano Movement. Palgrave Macmillan, 2016). In it, she explores political documents through a religious lens, redefining them as scripture. Both The Spiritual Manifesto of Aztlán and a similar document, The Plan of Santa Bárbara, were drafted in 1969 and quickly became ubiquitous. “They were touchstones people could turn to for phrases, images and an identification of who and what the Chicano movement was,” Hidalgo says. That, she adds, is how we know they are scriptures.

Hidalgo, who attended the Claremont Graduate University for her Ph.D. for its Institute for Signifying Scriptures, explains that scripture is not just text considered to be divinely inspired. “Scripture is any item that people feel stands as a mirror for themselves, something that is sacred and centering for a community,” she says.

Hidalgo came to Williams as a Bolin Fellow in 2008 and joined the faculty in 2010. She teaches courses including Utopias and Americas, Racial and Religious Mixture, and Scriptures and Race. She says her book “attempts to fill a scholarly lacuna about the relationship between religion and Latino/a studies.” 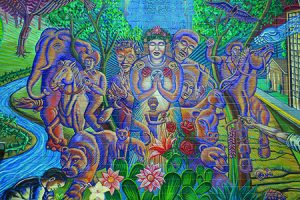 In what might be either ironic or fully logical, the utopian vision and critical epistemology of a minoritized and subjugated group came to be biblical Revelation, one of the scriptures of an imperial order, first of the Roman world, and then, in modernity, of the various settler colonial nations of Western Europe. In reading U.S. history, we are frequently reminded of the power of the Exodus motif—which also exists in Revelation—as both a locus for settler colonial justification and African-American resistance to racialized enslavement. However, biblical motifs of place, such as Eden and the new Jerusalem, also were powerful. … This project takes up a conversation between the Chicanx movement and the Book of Revelation in order to think about scriptures as loci and discourses of knowledge and power, as practices of homemaking for those who have been unsettled, but also as practices of self-homing while unhoming others, at least as these practices have been used by settler colonizers and dominating regimes. A persistence of apocalyptic, utopian and scripturalizing modes travel from Revelation and become part of the social fabric that Chicanxs appropriate, contest and revise in the 1960s and 1970s. A key assumption of this project is that Chicanxs have already been significant interpreters of Revelation, playing with the textual imaginary in ways that are not always registered as such in dominantized biblical scholarly discourses. In shifting from a focus on the Bible alone to the question of scriptures, I can look at the ways in which Chicanxs have engaged scriptural phenomena, particularly as legacies of biblical usages and imaginations, even when Chicanxs do not directly quote the Bible.

—From Revelation in Aztlán: Scriptures, Utopias and the Chicano Movement. Palgrave Macmillan, 2016.