Sixteen years after encountering the diaries of Lucien Dreyfus, a French Jewish man who perished in the Holocaust, history professor Alexandra Garbarini ’94 is about to have them published in France.

Garbarini came across the journals while researching her first book, Numbered Days: Diaries and the Holocaust (Yale University Press, 2006), an analysis of diaries from all over German-occupied Europe. During the 1990s, someone sent Dreyfus’ journals—which he began keeping in the mid-1920s—to the U.S. Holocaust Memorial Museum in Washington, D.C., one notebook at a time. The envelopes were postmarked Dallas, Texas, but there was no return address.

“I felt the diaries should be published,” says Garbarini. “But because they had been sent anonymously, there was no way to contact the next of kin to ask for the rights to do so.”

Dreyfus’ writing spoke to Garbarini for several reasons. He was an intellectual living in the provinces of France, so his story was unlike those of other Eastern European diarists she was studying. Also, in contrast to many other Orthodox Jews, he didn’t question his religious faith as a result of the Holocaust and the events leading up to it. 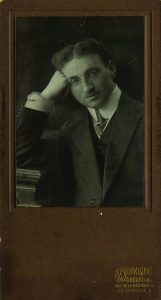 Dreyfus was born in Alsace, a region of France that for much of his life was annexed by Germany. He was brought up as a French patriot and a Jew. At the age of 15, he was sent to Berlin for rabbinical school, but he changed course and returned to France to teach literature and history. As a French and German bilingual, he had a second job as a journalist and editor for The Jewish Tribune. When German Jewish refugees began flooding into France in the 1930s, he ensured that the paper included articles in German.

Garbarini, who joined the Williams faculty in 2003 and teaches courses on European Jewish history and the Holocaust, included an analysis of Dreyfus’ diaries in Numbered Days. But his story continued to haunt her. So, one day in 2012, she returned to the museum to reopen her inquiry. “A lot had changed in the archival landscape in the decade since I’d first read the diaries,” she says. “I could now consult digitized sources, find ship manifests and do keyword searches.”

The first clue in a long line of discoveries was a manifest listing Dreyfus’ daughter, son-in-law and granddaughter, who escaped Vichy France as escorts to a group of rescued children. The granddaughter later settled in Dallas. Her husband found the notebooks after her mother’s death and mailed them to the museum.

Though it’s unclear how Dreyfus’ daughter came to have the diaries, there’s a specific moment in them when he began recording things he wanted her to know.
“The idea clearly was in his head from that point forward that this diary needed to reach her,” Garbarini says.

Once Dreyfus’ granddaughter learned of the journals’ existence, she readily gave permission for Garbarini and University of Manchester lecturer Jean-Marc Dreyfus (no relation) to publish them. Later this year, Éditions Le Manuscrit (Paris) and the nonprofit Fondation pour la Mémoire de la Shoah (the Foundation for the Memory of the Shoah) will release an annotated edition of the volumes written during the war. The editors hope to one day publish the book in English in the U.S.

“Dreyfus’ diary offers readers an original reflection on the meaning of the persecution of European Jewry as it was unfolding,” Garbarini says. “It serves as an eloquent reminder of the impact of warfare on individual lives and about the human capacity for resilience.”
—Julia Munemo