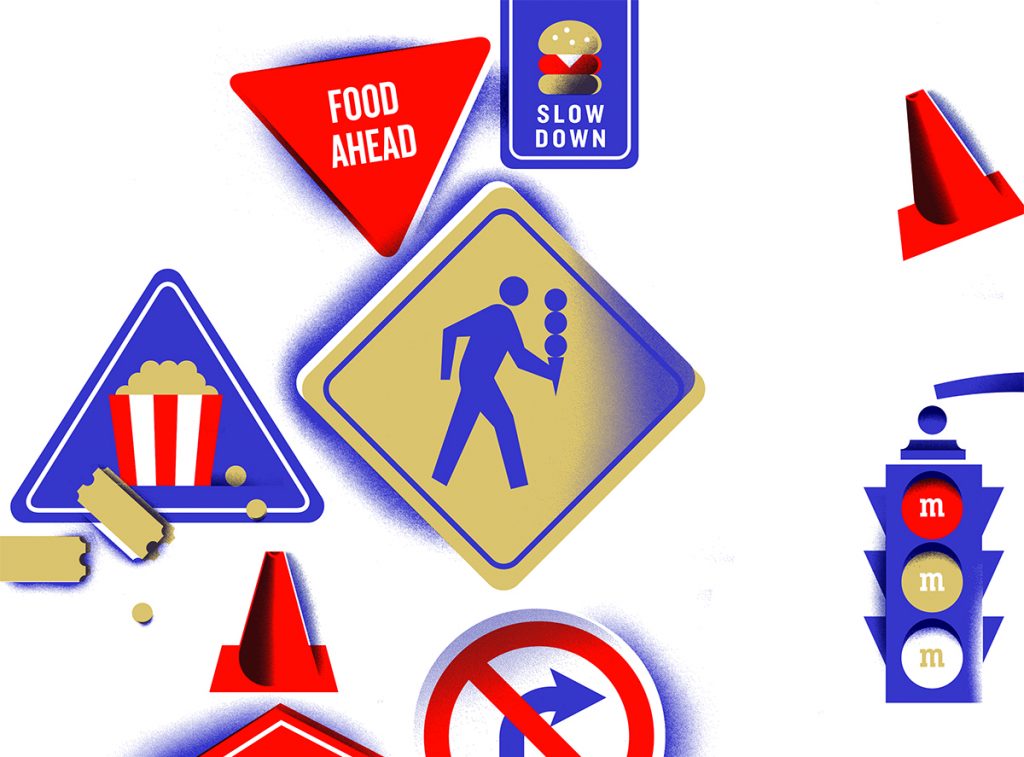 Research suggests that we make more than 200 food-related choices each day, including what, when, where, with whom and how much to eat. In a new Winter Study course, Psychology of Eating, Assistant Professor of Psychology Jeremy Cone asked his students to consider how behavioral science informs our understanding of why we eat what we eat and how our decisions about food are influenced by many factors—only one of which is hunger.

“Food decisions seem less under our control than we might imagine or want them to be,” says Cone, whose research falls into two categories: judgment and decision-making on one hand, and social cognition and attitude change on the other. “I was interested in exploring how ideas from those fields apply to eating choices.”

Twenty students enrolled in his class, a mix of first-years, sophomores, juniors and seniors. They read about how people make judgments and decisions and about how those choices affect behavior. Then students tested these ideas on campus and around town.

“I wanted students to get a taste for how behavioral science can contribute to our understanding of eating decisions and to develop their critical evaluation skills,” says Cone, who came to Williams in 2015. “That’s why many of our class meetings included the replication of the studies we were reading.”

Among the studies Cone and his students replicated in Psychology of Eating:

Popcorn at the Movies

A study conducted in 1998 involving 161 moviegoers attending two sessions of the movie Payback at a theater near Chicago found that increasing the size of a bucket of popcorn from 120 grams to 240 grams increased popcorn consumption by 48 percent. When Cone’s students replicated this study—using one- and two-gallon Ziploc bags for popcorn, similar (though smaller) differences emerged.

In a Cornell study published in 2007, 50 graduate students went to an all-you-can-eat sports bar for chicken wings. Staff were instructed to regularly remove discarded chicken bones from one set of tables and leave them untouched at another. Participants at the cleared tables ate an average of 1.5 additional wings per person relative to those sitting at tables left unbussed for the duration of the experiment. When Cone and his students replicated this study at the Log, people seated at the bussed tables ate an average of three more wings per person than those sitting at unbussed tables.

In a study published in PLOS One in 2013, Brian Wansink from Cornell University found that serving healthy foods first in buffet lines improved overall meal selection. Similar results came out in a 2016 study about making healthy foods the default option on menus. Cone’s students considered these studies before eating together at Driscoll Dining Hall. After experiencing the buffet-style dining, they discussed questions including: Did having the hot entrees at the start of the food line influence what people ate relative to having the salad station or sandwich station farther along?

Research published in the American Journal of Preventive Medicine in 2006 in which 85 faculty, graduate students and staff members attended an ice cream social found that even nutrition experts served themselves 31 percent more ice cream when randomly given a 34-ounce bowl versus a 17-ounce bowl. When Cone’s class replicated this experiment, the students served themselves an average of 24 grams more ice cream when they were given larger bowls.

In what Google dubbed “Project M&M,” behavioral scientists at the tech giant tried a variety of approaches in 2013 to reduce consumption of the candy, which was freely available to employees in the snack room. One of the most effective strategies: Placing the M&Ms in an opaque container and putting other, more nutritious, snacks in transparent ones. It resulted in 3.1 million fewer calories from M&Ms consumed over a seven-week period. Though the students didn’t get a chance to replicate the experiment, they studied it in class.