From Solid Earth to the Universe

In June, the college will commemorate the 200th anniversary of the first geology class ever taught at Williams. Bud Wobus, the Edna McConnell Clark Professor of Geology, has been here for 50 of those 200 years. With these milestones in mind, Williams Magazine talked with Wobus, who received the National Association of Geosciences Teachers Neil Minor Award for 2016, about the discipline’s place in the liberal arts and how the program has evolved in what has been—in geologic terms—the blink of an eye.

Williams Magazine: What brought you to Williams?

Bud Wobus: I came in 1966. I finished my Ph.D. at Stanford in the spring, and I was here in the fall. I wanted to try teaching in a small, liberal arts college. I went to Washington University, Harvard, Stanford—all big universities, so I’d never experienced the small college tradition. And yet my closest friends at Stanford mostly came from small colleges. They could speak and think clearly about so many topics.

Williams: What changes have you seen over the course of 50 years in the discipline?

Wobus: The department was small when I arrived—just four men. And, of course, all the students were men. The best thing the college ever did, after divesting itself of 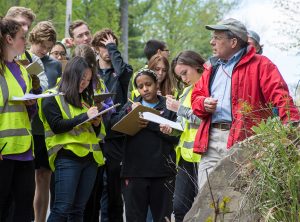 fraternities, was to go co-ed. In those days, we taught what was basically “solid earth” geology. Students who focused on hard rock geology—igneous and metamorphic rock like granite—would go into mining. Students who studied soft rock or sedimentary geology went into oil exploration. Today, of the nine faculty members in the department, four are women. The curriculum has expanded to include the fluid envelopes around the earth—the oceans, the atmosphere. Climate studies are a major focus. Most students go into environmental consulting firms, several of which are run by our own alumni. We even do planetary geology. Our chair Ronadh Cox has had students go to graduate school for astronomy and planetary studies. So we’ve expanded from the solid earth to the universe, practically.

Williams: How has technology changed field studies in the discipline?

Wobus: That’s been a big change. When I came on board, we used aerial photographs, topographic maps, a little barometer to tell you what the elevation might be—which you had to set several times a day—and a little geological compass. Now people go out with laptops, everything is digitized, and they can download immediately the topography of the area. They can overlay that with what had been studied earlier, geologically, and GPS tells you exactly where you are. You don’t need that barometer anymore. So we now go out with a whole armament of digital equipment that makes field work much more reliable.

Williams: What do you see for the geosciences as you look ahead?

Wobus: Like so many things now, it’s almost unpredictable what the needs are going to be. I think that’s why a liberal arts background is as good as anything you can get. You can’t possibly take all the courses that might be relevant for what you might be doing five years from now, which might be very different from what you might be doing 10 years from now. You’ve really got to be flexible, and that’s what liberal arts colleges are supposed to be and have been. That’s why our students are so much in demand.