A Fuller Picture of Theyanoguin 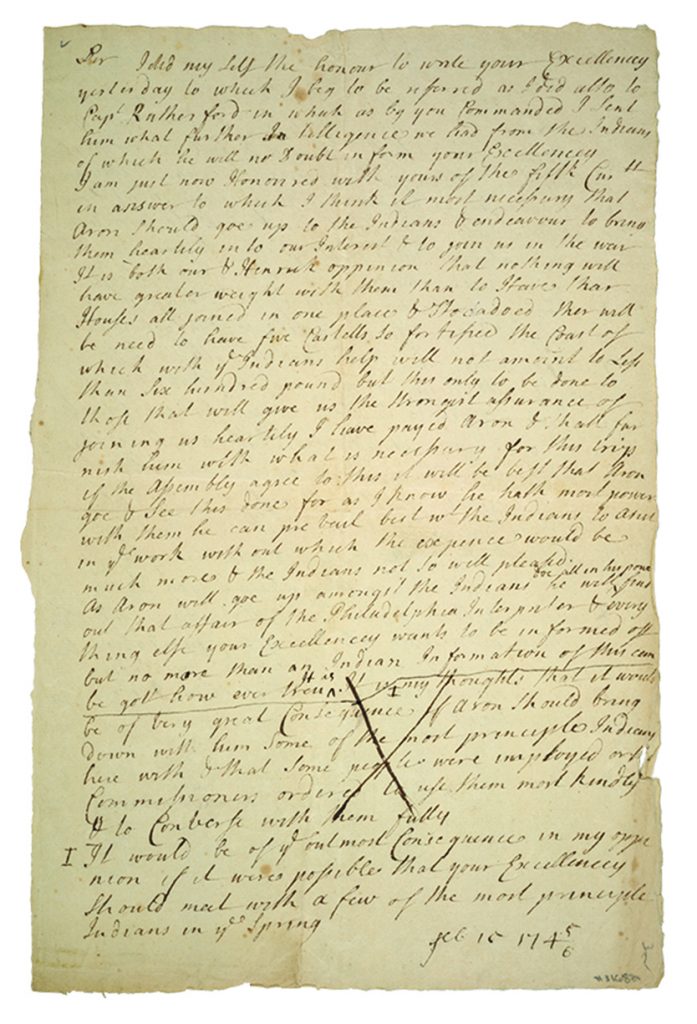 The Chapin Library is adding to the ongoing campus conversation about historical representation with a newly acquired 18th-century letter referencing Theyanoguin, the Mohawk leader depicted with college founder Ephraim Williams in a controversial mural in the Log.

In the Feb. 15, 1745, letter, translator and interpreter Arendt Stevens reported to George Clinton, governor of the Province of New York, the opinion of “Henrik” that colonial authorities should ally with the Iroquois Confederacy. “Henrick” refers to Theyanoguin, whom the English called Hendrick.

“It is both our and Henrik oppinion (sic) that nothing will have greater weight with them than to have thar (sic) houses joined all in one place and stockade,” Stevens wrote. He also proposed that an emissary be sent “to the Indians & endeavor to bring them heartily into our Interest & to join us” in King George’s War (1744-1748).

Chapin Librarian Wayne Hammond spotted the letter in October, while preparing for the Boston antiquarian book fair. He bought it using a fund established by the late J. Brooks Hoffman ’40 for the purchase of Americana.

The letter is part of a spring exhibition at the Library Special Collections called “Take due notice of us for the future: Native Americans and Williams College,” referencing a quote from Theyanoguin’s address to the Albany Congress of 1754, in which he thanked the governor for instructing the Commission on Indian Affairs to “take due notice” of the Iroquois Confederacy.

The letter is also one of the objects students are studying in the new spring course Uncovering Williams, taught by Dorothy Wang, associate professor of American studies, and Kevin Murphy, curator of American art at the Williams College Museum of Art. The course, “sparked by the current controversies around visual representations at Williams … interrogates the history of the college and its relationship to land, people, architecture and artifacts.”