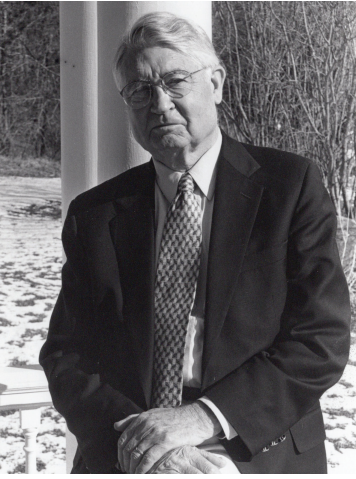 The foundation of one of the most distinguished careers in higher education was built in an unlikely place and time. John Chandler served as president of Hamilton for five years and Williams for 12. He was president of the Association of American Colleges and Universities, chairman of the board of Duke and adviser to some 40 presidential searches in higher education. He has been awarded 16 honorary degrees. Still active in his retirement, he has been working on several writing projects, including a reminiscence of his years growing up in a North Carolina orphanage during the Great Depression, from which the following is excerpted.

My father was a subsistence farmer in Madison County. His first two wives died young, and my mother was much younger than he. He died in 1931, leaving her destitute. At age 6, I was the oldest of four children; the youngest was just 5 days old.

With the Great Depression tightening its grip, we moved to Black Mountain to live with an aunt and uncle, their two infant children and my invalid grandmother. They did their best to look after us all despite their own growing financial strains and my mother’s worsening bipolar disorder. Some time later, to ease the situation, my brother Cal and I moved in with different relatives.

I tried to be as little a burden as possible and contribute as I could. I became skilled at feeding seedling tobacco plants into the mechanical planter. When it came time to castrate hogs, my function was to apply a quick daub of alcohol to prevent infection of the wound. The protesting squeals would ring in my ears for hours.

As the situation worsened, I overheard worried conversations about putting us up for adoption, which so upset one neighbor, Florence Ponder Duck, that she importuned her father, a Baptist minister, to seek our admission to Mills Home, a Baptist orphanage.

Many years later I became reacquainted with Florence and learned that she was actually a first cousin. Looking back, she said, “They were ready to give you away like kittens,” adding that those who expressed interest in adopting us viewed us as farmhands and future caregivers, as a form of social insurance in a time when government programs made little provision for the elderly.
So in January 1934, my brothers Cal and Ted and I entered Mills Home. Our brother Baxter, still an infant, remained with our mother. The orphanage was my home until I graduated from high school.

Life there revolved around school, work, religion and athletics. There was considerable intellectual stimulation and an informed awareness of what was going on in the larger world. The library was excellent, and it remained open and busy throughout the year. Many staff members, in addition to the teachers, were college graduates. All of our teachers were dedicated, and some were truly excellent.

The school day extended into the evening, when we gathered in the living rooms of our cottages for supervised study. On Saturday evenings we worked on our Sunday school lessons so that we’d be prepared to discuss the assigned topic the next morning. No one went to bed without reciting to the satisfaction of the study hall supervisor a short passage from the Bible: the memory verse.

Because work was a large and economically necessary part of the experience, the school day was divided into two sessions. We lived by bells; the first sounded at 6 a.m. By 7:30, half of us were in school and the other half at our work posts. The afternoon was the mirror image of the morning.

I became a Linotype operator in the print shop, a skill that took a long time to learn and which later helped pay my way through college. In the sixth grade I worked as an office boy for the school principal.

I remember no precise moment when I assumed that I would go to college. But as I observed the departures of graduating seniors over the years, I saw myself as a member of the ranks of those who did so.

For more than half a century the August pilgrimage to Mills Home for alumni weekend was a highlight of my year. As the pitcher for the Williams faculty softball team, for many years I was in good enough shape to take the mound for the alumni team that played against orphanage youngsters. My wife Florence went with me to a couple of homecomings. Thereafter, she sent me on my way alone to enjoy the company of my hundreds of orphanage brothers and sisters. She sensed the powerful bonds among those who had shared that experience.

John Chandler earned a B.A. from Wake Forest and a Ph.D. from Duke. He joined the religion department at Williams in 1955 and later served as the first-ever dean of the faculty and chair of the curriculum committee that proposed the Winter Study program. During his 12-year tenure as Williams president, he led the completion of the college’s plan to phase out fraternities and admit women, acquired the properties in Oxford that enabled the launch of the Williams-Exeter Programme at Oxford and oversaw the development of several campus buildings, including the gymnasium that bears his name.