In The Carrying Stones Project, Katie Sawyer Rose ’96 explores the “double burden” of women’s work inside and outside the home—and how little time women have left for themselves.

Katie Sawyer Rose ’96 aims to make the invisible visible with her artwork. Her multimedia sculptures represent the work women do both inside and outside the home—something economists struggle to measure—and reveal that data can be surprisingly beautiful. “We are inundated with statistics,” Rose says. “Sometimes it’s easier to understand the data if someone draws you a picture.” 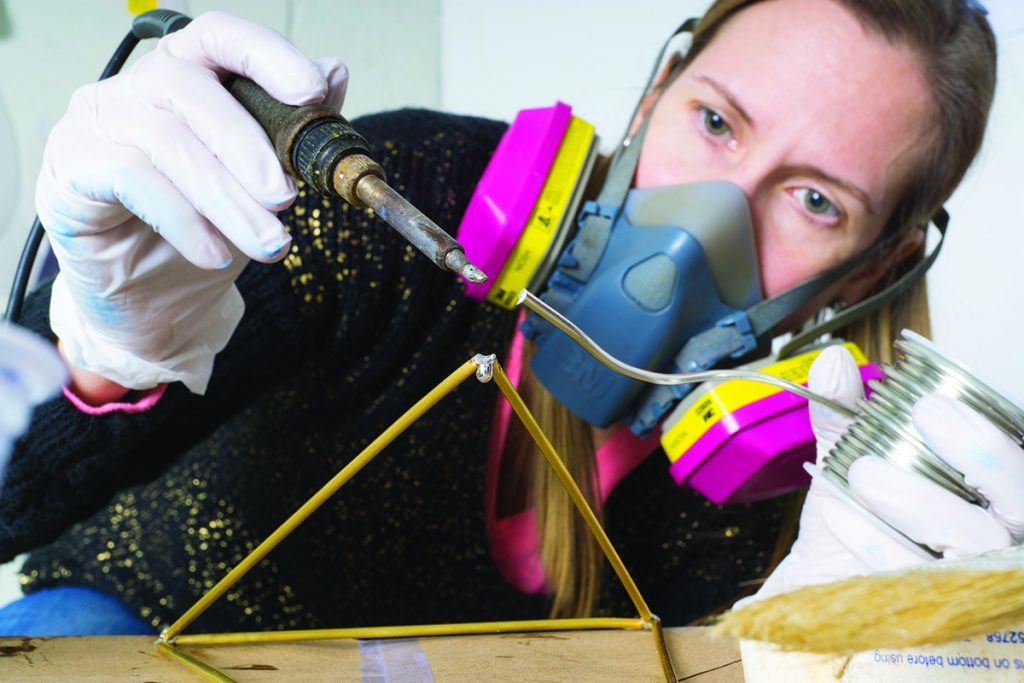 In January, Rose was a resident with Assets for Artists, a program administered by MASS MoCA that provides support services and financial training for creative entrepreneurs. She spent two weeks in a studio on the museum’s North Adams campus, planning and building prototypes of the sculptures she’ll make for her new project, “Force of Nature.”

“Ties That Bind” represents 1,000 work hours completed by 47 women. Artist Katie Sawyer Rose ’96 defines work as anything a woman is doing for others and not for herself.

Rose plans to interview roughly 50 women from all over the country who represent different ages, racial and ethnic backgrounds, and working lives. From the interviews, she’ll create a sculpture to represent each woman’s work, starting with her college roommate, Tracy (Weir) Marek ’96, an attorney living in Newburgh, N.Y.

“Her world is very ordered,” Rose says of Marek. “She likes it to run like clockwork—and yet she is also deeply grounded. Her sculpture will include geometric shapes and yet be composed of earth materials, like rock.”

Another sculpture Rose began developing at MASS MoCA will portray a lesbian couple. One of the women commutes to a job in Washington, D.C., from San Francisco every week, while her wife is a stay-at-home mom. “Their sculptures will somehow be intertwined,” Rose says. “I want to portray how much these two working women depend on one another.”

Once all the sculptures are complete—a project Rose thinks will occupy most of the next two years—she’ll photograph each woman carrying or wearing her sculpture, “literally shouldering her load,” she says. She also plans to publish a book documenting the sculptures and the portraits as a way of telling the women’s stories. 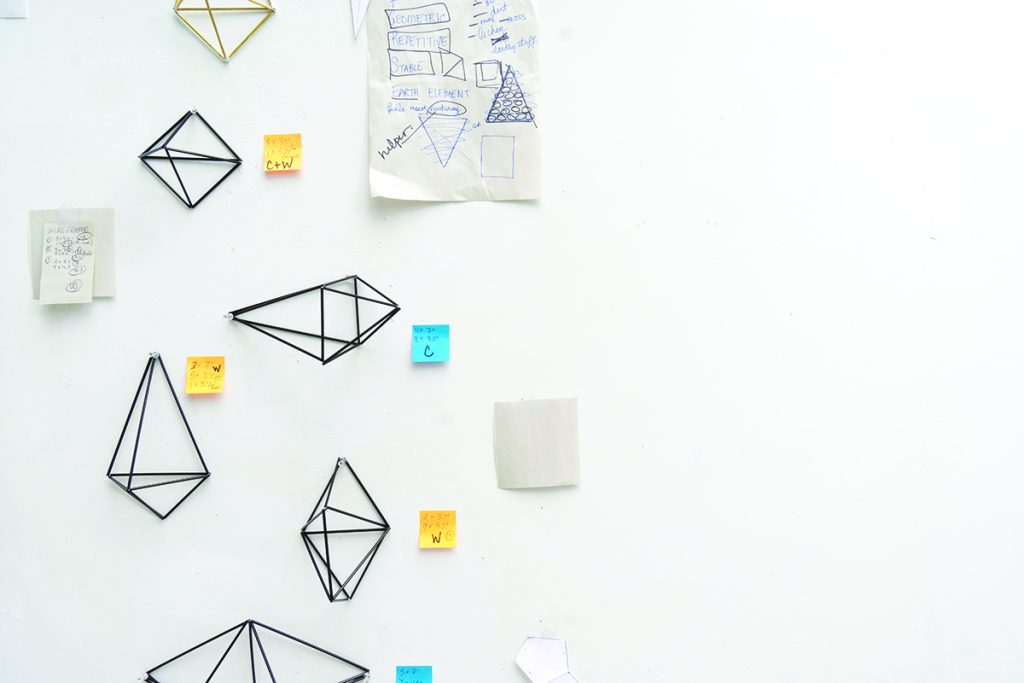 “Force of Nature” is the second part of a larger project Rose calls The Carrying Stones Project. She first heard the expression “carrying stones” during a trip to Brazil with her two young children. “I had a baby under each arm and was running around doing this and that,” she says. “My host said, ‘Stop carrying stones and sit down.’

“The expression can be traced to the Portuguese, and it’s common in Brazil today,” Rose says. “When women are grumbling about their work life, they say, ‘If I’m not working, I’m carrying stones.’ It means: ‘I work all day for my family to make money, and then I work all night for my family to hold this house together.’” This idea is at the heart of Rose’s project.

Rose, who lives in the San Francisco Bay Area and is a full-time working artist, exhibited the first installation of The Carrying Stones Project in September 2016 at Fort Mason Center for Arts & Culture in San Francisco. Called “Ties That Bind,” the installation featured a 20-foot sculpture made of tiles representing 1,000 work hours completed by 47 women around the country, including those holding multiple paid jobs, stay-at-home moms and white-collar professionals. “I aimed to represent as many demographics as possible,” Rose says. 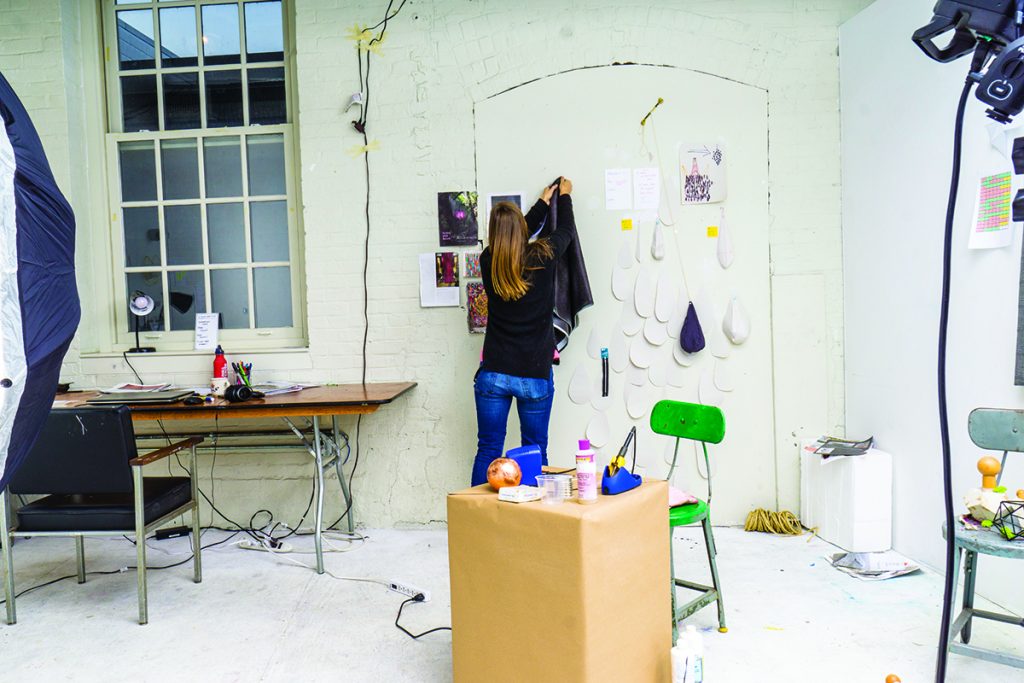 In order to collect the data the sculpture is based on, Rose developed a mobile phone app that participants used to track their time. For each hour they were awake, the women logged whether they were completing paid labor, unpaid labor or other activities. Based on the participants’ data, Rose crafted different types of tiles—each roughly 4 by 6 inches in size—to represent different types of work. The tiles are tied together to form a three-dimensional tapestry that resembles a woman’s body.

In the sculpture, paid labor is represented by tiles made from silver solder and copper. “The metalwork tiles look a bit like coins,” Rose says. “For some women, money means status; for others, survival.”

Unpaid labor is represented by tiles onto which Rose sewed fabric resembling a dishcloth. “There are a lot of dishcloths in my life,” she says with a laugh. “It’s symbolic of all the work we do at home.”

The few blank spaces scattered throughout the sculpture represent the hours women logged as “leisure/other.”

Rose defines “leisure/other” as anything that isn’t work—activities ranging from a facial to a dentist appointment. She defines work as anything a woman would be doing for others and not for herself. “I worked with an artist who didn’t know how to categorize her time spent sketching projects, because the sketches would not result directly in payment,” Rose says. “We decided that if what she was doing was in furtherance of paid work, it should be counted as paid labor. In other words, I went with intent.” 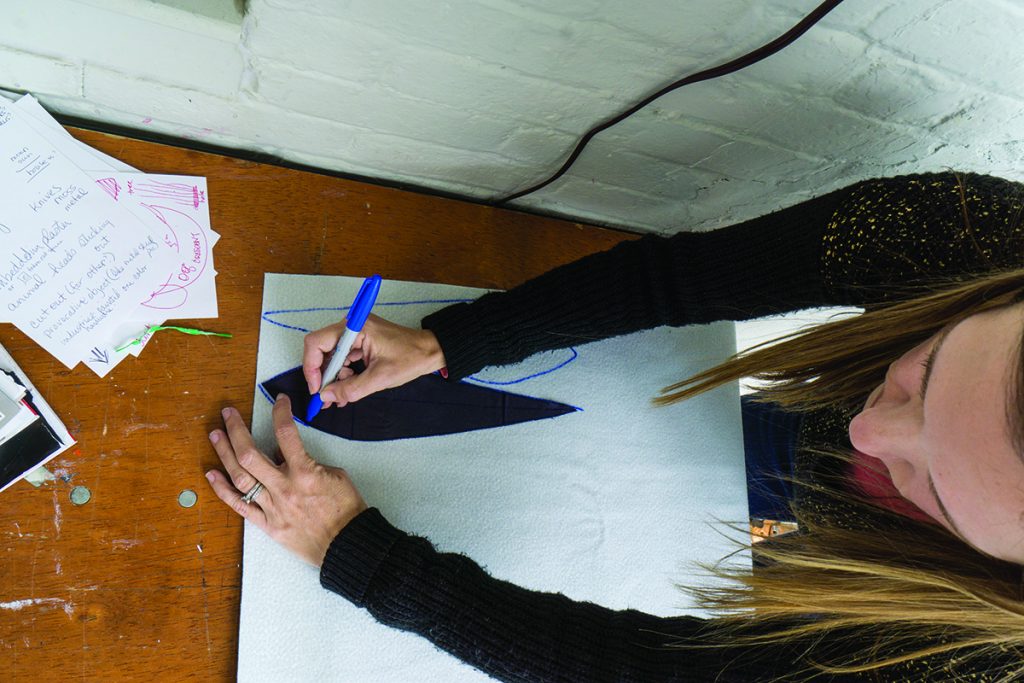 Williams economics professor Lucie Schmidt, who teaches a course on Gender and Economics, uses a similar rubric for defining work and leisure. But that rubric can be subjective, she says. Some people categorize an activity—say, baking with one’s child—as leisure, while others consider it home production or unpaid labor. “I show my class the American Time Use Survey and ask students to decide which activities they think are home production and which leisure,” Schmidt says. “It’s harder than you might think.”

Rose says that no matter how you separate work and leisure, “What you can see so clearly in ‘Ties That Bind’ is that most of our time is spent working, either in the home or outside of it. Only 15 percent of the space on the sculpture is blank, for non-work activity.”

Schmidt, who says those numbers are largely consistent with American Time Use Survey data, puts the question of men’s and women’s labor in a different context. “Feminist economist Nancy Folbre has compared the careers of men and women to a race,” she says.
“The only difference is that the men get to run unhindered, and women run while carrying all the family responsibility on their back.”

Schmidt, who has asked Rose to video-conference in the next time she teaches Gender and Economics, says there’s value in making art that demonstrates data. “What makes this project so special is that it makes visible something that is unseen,” Schmidt says. “Women’s home production is invisible to most people and invisible in most of our data. It doesn’t show up in employment statistics or GDP, and only in recent years has the U.S. collected nationally representative time-use data that allows us to measure it.”

Making the invisible visible was one of Rose’s goals. “I want to give voice to women who are not given voice, who are not encouraged to take up space,” she says. “I want these women’s stories to take up as much space and to make as much noise as possible.”

Julia Munemo is a writer based in Williamstown, Mass.

While in residence at MASS MoCA working on “Force of Nature,” artist Katie Sawyer Rose ’96 talked with Williams economics professor Lucie Schmidt about how their work overlaps.

Katie Sawyer Rose ’96: Usually my projects start out when I get a bee in my bonnet about something, and then I go all nerdy and start mining for information. Only after I have the data can I start asking how I’m going to convey that to other people, how I’m going to draw them a picture.

Lucie Schmidt: In my Gender and Economics class, the students write family histories. They do a work family tree, tracing everyone as far as they can and exploring what they did for paid work. Then they write papers putting their family experience in the context of broader trends. One important outcome is that students recognize that their mothers were economic actors who had all sorts of options. Whether they chose to stay full time in the labor force or to stay home, what they did at home was sometimes invisible until the students started to analyze it academically.

Rose: Yes, now they can quantify it in a different way. I explained to my husband recently that if you measured women’s domestic work it would make up 25 percent of the GDP (gross domestic product). He had this moment of clarity. Whereas for me, it’s a visceral life experience, to him it only makes sense when he thinks of it in terms of money.

Schmidt: In economics, we have measured estimates of how GDP has changed over time. There’s definitely an overestimate of GDP growth in part because, over the last 40 years, a lot of the work that women used to do for free at home is now being added to the market.

Rose: It would be impossible for me to be a working artist without the woman who takes care of my children. In my own sculpture for “Force of Nature,” I plan to include her—and make sure she’s in the photograph with me, helping me to shoulder my load.

Schmidt: We have this idea in economics of public goods. It asks: If children are public goods to society, and if I raise my children well, then what are the benefits to the rest of the world?

Rose: They could grow up to be the doctor that cures cancer.

Schmidt: But we treat individual women’s choices on child rearing as individual decisions. So we’re spending too little time on caring labor from society’s point of view. Add to that the fact that for me to hire someone to take care of my kids while I work requires some level of income inequality.

Rose: For you to make more and her to make less.

Schmidt: You could imagine a future exhibit where there was some way of representing visually a carrying of the load by others, a way of sharing the load societally.