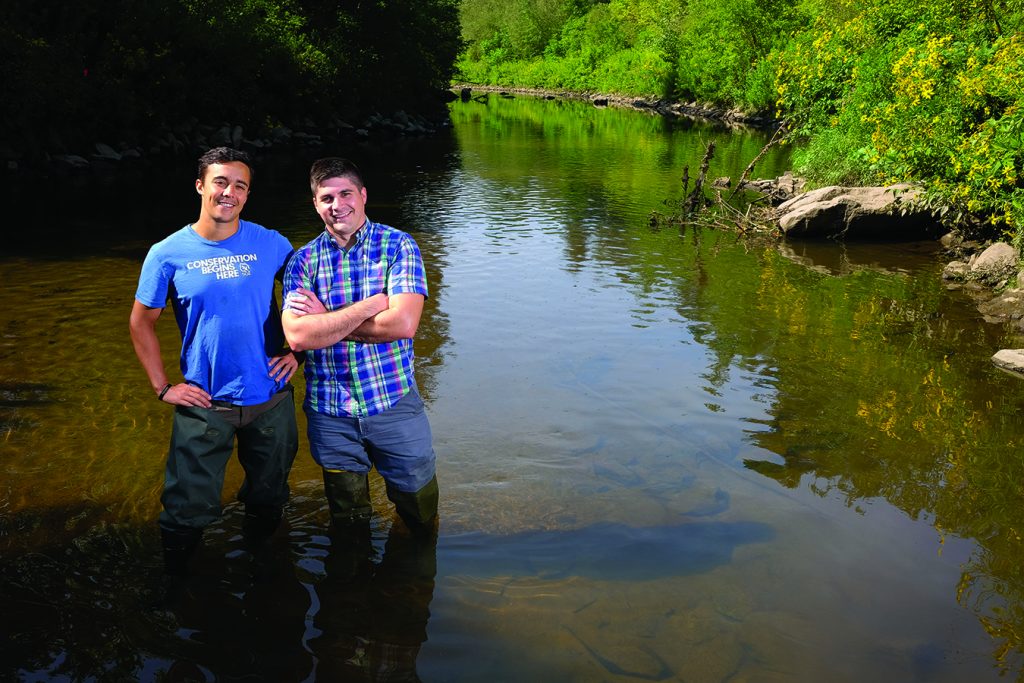 Assistant Professor of Geosciences José Constantine and geosciences major Emmett Blau ’18 are investigating whether a river’s natural movement across its floodplain, and the subsequent oxbow lakes it produces, are acting as natural filters of the river’s pollutants. Their case study is the Housatonic River, which cuts through Berkshire County and western Connecticut before releasing into Long Island Sound.

The Housatonic—like many rivers in the U.S.—is what’s known as a meandering river. The river moves laterally across its floodplain, sometimes as much as 100 feet per year. “If you look at a series of satellite images taken over the course of several years, it looks like a movie of the river moving back and forth,” says Constantine, who has studied meandering rivers all over the world, including the Amazon.

All of that back and forth movement can cause the creation of oxbow lakes, which—as their name suggests—are curved bodies of water formed when a meander breaks off from the main waterway.

“The Housatonic and its oxbow lakes make a perfect case study because they are badly polluted,” says Constantine. “General Electric released waste associated with building electric transformers in the area in the 1970s and 1980s.” That waste contained polychlorinated biphenyls (PCBs).

Now, with data collected by the Environmental Protection Agency (EPA) as well as their own core samples from the river and its oxbow lakes, Constantine and Blau are hoping to show that a river’s natural movement carries out an ecological service.

“We are testing our theory that the floodplains and oxbow lakes act as a filter,” says Constantine, who is teaching a course this fall on how climate change is reshaping our landscapes. “The PCBs bind to very fine-grained clay particles in the river’s sediment, and when that sediment sinks, it buries the PCBs with it.”

During flood events, contaminated sediment can jump the riverbanks. “The magic here is that the existing oxbow lakes take in that sediment, further filtering it for us,” says Blau, who will work in Constantine’s lab as a research assistant after he graduates. “If it weren’t for those lakes, the PCBs would be released back into the river after the flood waters receded.”

But several sections of the Housatonic are what Constantine calls “straightjacketed.” This is a common practice when development encroaches on a meandering river. In order to build closer to the water, people have cemented the river’s bank or otherwise constrained the river in order to control its movement.

“Without its natural ability to filter the water, all of that contaminated sediment has a straight shot to the sea,” Constantine says. “I hope our work can demonstrate that riverbeds and oxbow lakes should not be constrained or developed because they are the very thing cleaning our water.”

Constantine and Blau spent the early part of the fall semester taking roughly 200 core samples in sections of the river and oxbow lakes throughout Pittsfield. In October, the pair headed to Seattle for the annual meeting of the Geological Society of America, where Blau presented a paper based on his analysis of the EPA data. “The work we’ve done demonstrates the complex and diverse functions of the floodplain, both as a dynamic ecosystem and as a natural filter for harmful industrial pollutants,” says Blau. Now back on campus, they will spend the winter analyzing the data they collected from their own core samples, with the aim of co-authoring a paper. “I hope that the eventual paper we publish will help guide floodplain land use in the future,” Blau says.

Says Constantine, “We’re excited that our work could have a positive impact on the restoration of meandering rivers, both in the Housatonic and beyond.”