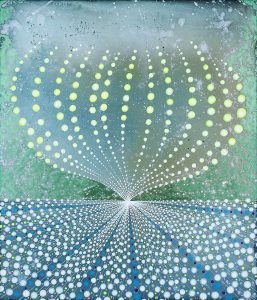 Critics have drawn connections between Barbara Takenaga’s abstract paintings and the Big Bang Theory, the night sky and psychedelic experience. But as viewers consider a new survey of her work curated by Debra Bricker Balken at the Williams College Museum of Art (WCMA), Takenaga wants them to keep in mind: “I still see them as open to interpretation.” Preparing for the survey was a “strange and wonderful activity,” says Takenaga, the Mary A. and William Wirt Warren Professor of Art. “It allows me to see the group as a whole and revisit images that I had forgotten.”

More than 60 works are represented, showcasing distinct changes in the style, subject matter and size of her paintings. Twenty years ago, Takenaga shifted from small works based on tiny black whorls and curlicues in her dog’s fur to enormous pieces that evoke galaxies. The transformation came “all at once,” she says, one day when she switched the colors she was using.
“At the time, I was thinking a lot about mortality in my personal life,” she says. “It was interesting to have these little outer space paintings that seemed funny but cosmic and a little trippy, too, like they were little elegies.”

Her work went from being quite small—in the 12-inch by 10-inch range—to being quite large. She currently has a 100-foot-long piece at MASS MoCA that was first printed as wallpaper and later hand painted. Today, a typical painting is 6 feet by 11 feet, composed, sometimes, as diptychs or triptychs.

She also challenged herself over time to reconsider her style. “As a teacher, I decided to give myself an assignment when I felt I was being too tight or structured in my work,” says Takenaga, who joined the studio art faculty at Williams 32 years ago. “I wanted to make myself loosen up, so I started throwing paint around and then using whatever fake abstract expressionist forms showed up as the source of the image, in a kind of Surrealist parlor game.”

In an essay for the catalog accompanying the survey, Jim Shepard, Williams’ J. Leland Miller Professor of American History, Literature and Eloquence, writes that “for all of her obsessiveness,” Takenaga has made it a point to “continually embrace radical change.” It’s what he calls “a paradox of self-exploration and self-effacement” that’s central to her work.
Lisa Dorin, WCMA’s interim director, says the survey’s 20-year span “helps us understand the trajectory of Barbara’s practice to date but also gives a glimpse toward where it may lead as she enters the next phase of
her career.”

Says Takenaga of the exhibition, “It’s like a reunion of old friends, looking backward and forward—it’s lovely and poignant at the same time.”
—Julia Munemo