Moving People and the Economy

Matatu: A History of Popular Transportation in Nairobi. By Kenda Mutongi. The University of Chicago Press, 2017. 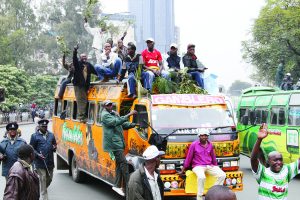 Kenda Mutongi was walking along a street in Nairobi, thinking about what she’d like to research for her second book, when she realized the answer was right in front of her. “Matatus are everywhere, but we don’t know anything about them,” says the history professor. “All we know is their bad reputation.”

Matatu is the word used in Kenya for the minibuses ubiquitous throughout Africa. In Nairobi, they transport more than 2 million people per day, from commuters on their way to work to mothers bringing children to doctors’ appointments and kids headed to school. But matatu drivers and conductors are considered dangerous and are blamed for much of what can feel like the chaos of this large city.

“They are looked down upon and thought to be corrupt,” says Mutongi. “Foreigners consider matatus too dangerous to ride, and they write them off as unimportant. But so many people depend on them.”

In her new book, Matatu, Mutongi traces the history of this industry. “I hope my book helps dismantle the notion that the only way Africans can earn money is if an NGO comes in and sets people to making beads, jewelry or baskets,” she says. “We need to hear more stories like those of the people in the matatu industry, who have created a highly profitable business.”

Mutongi, who is originally from Kenya, has been teaching courses in African history at Williams since 1995. Her first book, Worries of the Heart: Widows, Family and Community in Kenya, was published in 2007. 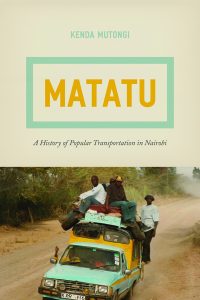 Without its matatus, the city of Nairobi comes to a near standstill. It happens some 10 to 15 times a year when matatu workers go on strike. Whenever they suspend their scramble through the streets, everything in the city slows down—the town center grows quiet, offices sit empty, stores close their doors, and the last lingering pedestrians are able to walk the sidewalks with ease. There are no commuter trains or trams, the traffic and poor road conditions make cycling impossible, and the government, regrettably, provides only a few irregular and ineffective buses. … Whenever the city’s moving mosaic of matatus comes to a stop, the forsaken commuters are once again reminded of just how much their lives depend on these flamboyant minibuses and the army of workers who operate them. … It is unlikely that Nairobi’s economy could survive without the overwhelming achievements of the matatu industry. Since the early 1960s, the matatu has provided transportation to at least 60 percent of the city’s population, and the matatu industry has become the largest employer in the so-called popular economy by providing livelihoods to mechanics, touts, fee collectors, drivers, artists and other associated businesses. … The matatu industry is homegrown. The owners and workers are making it on their own, without foreign aid or government support and despite subsidized competition, government interference and systemic corruption. For several decades now, the matatu industry has provided a rare example of a highly profitable business that has turned out to be vital to the development of Nairobi and its identity—as the acclaimed Kenyan writer and activist Binyavanga Wainaina has remarked, “Matatus are Nairobi, and Nairobi is matatus.”