What Can We Learn From Fly Brains?

Williams » Williams Magazine » Summer 2016 » Study » What Can We Learn From Fly Brains? 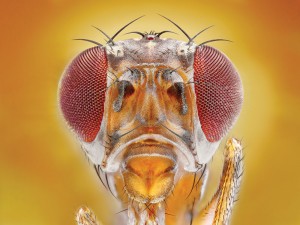 Humans may not have much in common with fruit flies. But there’s one important similarity: Both have nervous systems that respond to dopamine, a neurotransmitter present in the brain that helps to regulate movement and emotion.

Assistant biology professor Tim Lebestky has been studying dopamine in Drosophila melanogaster, the fruit fly, since he was a postdoctoral fellow at Caltech. Dopamine requires the presence of proteins called dopamine receptors to transmit its messages. “Without dopamine receptors, the animal can’t ‘hear’ the dopamine signal and behaves as if dopamine were absent,” Lebestky says. “That allows for a kind of functional brain mapping—finding out what behaviors dopamine affects by observing their absences and then selectively restoring dopamine function in small parts of the brain. The final outcome is the identification of small subsets of neurons that specify different behaviors through dopamine function.”

Lebestky, who earned his Ph.D. at UCLA and has taught at Williams since 2011, has mapped several behaviors in fruit flies. “Because Drosophila are so easy to maintain and keep, they provide something of a playground in which to test out different ideas that may eventually affect humans and pharmacological interventions for disease states in the brain,” he says.

That’s because the fruit fly brain has molecular similarities with the human brain.

Lebestky and his students researched dopamine’s effect on arousal, sleep and memory in fruit flies. Then, three years ago, a group of students in his Neural Development and Plasticity course asked to look into its effects on grooming. With Lebestky they designed an experiment to compare typical fruit flies to genetically altered, or “mutant,” ones that lack the dopamine receptor gene.

“I had an inkling we might see something interesting,” says Lebestky. He was right: Mutant flies groom themselves less effectively than their unaltered counterparts. After seeing clear results in his students’ experiments, Lebestky ran more thorough tests and demonstrated that mutant flies are 28 percent less effective groomers. His work was published earlier this year in Genes, Brains and Behavior.

Lebestky will continue to study the dopamine receptor and whether the grooming defect increases fruit flies’ susceptibility to infection. “Grooming is an important response for animals to keep their bodies clear of microbes and parasites,” he says. “If that is misregulated, there can be dire consequences for the animal.”

The investigation will help him understand if and how the brain knows when the body’s immune system is under attack and where on the body the attack is occurring. “This may lead us to new comparative molecular relationships between immunity and behavior in both humans and flies,” he says.

In the conclusion of his paper, Lebestky writes: “More evidence and investigation into evolutionary relationships between molecules, neural networks and the systems of organization within the invertebrate and mammalian brain suggest many similarities, and future comparative investigations will allow a richer, reciprocal understanding of brain circuitry and its regulation.” Meaning: We’re not so different from flies as we may think.

Fruit Fly Grooming – Three years ago students in biology professor Tim Lebestky’s Neural Development and Plasticity course asked to look into dopamine’s effect on grooming in fruit flies. They designed an experiment and built a grooming chamber (above) to compare typical fruit flies (top row) to genetically altered, or “mutant” ones that lack the dopamine receptor gene (bottom row).