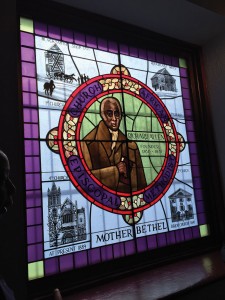 A stained glass window at Mother Bethel AME Church depicts the founder, Bishop Richard llen, and the evolution from the first church (at the blacksmith’s shop in 1791) to the current building on the same parcel of land in 1889.

Marissa L. Shapiro ’18 felt a swelling in her heart as she listened to a sermon at the Mother Bethel African Methodist Episcopal (AME) Church in Philadelphia, Pa. Though she’d read sermons and studied religion from an academic perspective, this experience was different. “It didn’t matter that it wasn’t my religious tradition,” says the history and Jewish studies major. “It was about the connection I felt with the people around me.”

That connection was possible thanks to VaNatta Ford, visiting assistant professor of Africana studies. She and students in her course The Rhetoric(s) of Black Religious Traditions spent a weekend in Philadelphia, where they met with an imam and members of the Masjidullah mosque, visited a museum and attended Sunday morning services at Mother Bethel, which sits on the oldest parcel of land owned by blacks in the U.S.

Ford, an ordained AME minister, says, “Philadelphia is robust with black religiosity, so it’s the perfect place to experience how rhetoric—that is, how messages impact and influence people—is communicated in black religious traditions.”

The course explored the religious expressions of black Americans. Students read sermons and other forms of public address and listened to spirituals and gospel music.

“For many of them, this was their first experience in a black religious community,” Ford says of her 16 students.

The course “exemplifies the best of what the Africana studies program offers at Williams,” says Africana studies chair James Manigault Bryant. “By incorporating experiential learning into her class, Professor Ford demonstrates how to use ethnographic methods to bridge theory and the real world.”

Next year, Ford, who has a Ph.D. in rhetoric and intercultural communication from Howard University, will teach Giving God a Backbeat: Rap Music, Religion & Spirituality. The course, she says, will “examine the ways earlier black musical traditions have contributed to religious and spiritual rhetoric in hip hop music.”