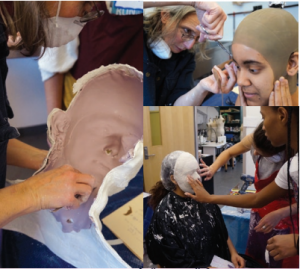 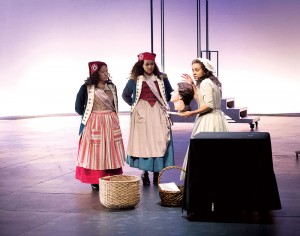 The world premier of Waxworks at Williams in May.

A spring semester production of the play Waxworks, about the early life of wax sculptor Marie Tussaud, presented an opportunity for students taking Costume Design to learn the art of “life casting.”

The play opens in 1789, just before the French Revolution, when a young Marie Grosholz (Tussaud’s birth name) leaves her post at the Palace of Versailles to work in the Paris wax salon of her mentor, Dr. Philippe Curtius. There she meets some of the city’s most influential people while making casts of their heads, a custom among aristocrats and intellectuals. As the revolution becomes more violent, her work turns to making death masks of people, some of whom were her friends, who were beheaded by guillotine and then labeling their waxen images to identify them as “patriots” or “enemies.”

“It’s a play with big themes that demanded a big set, big costumes and big props,” says costume director and lecturer in theater Deborah Brothers, who each year modifies her costume design course to fit the needs of the productions taking place.

For Waxworks, which premiered at the ’62 Center for Theatre and Dance in May, Brothers invited Beckie Kravetz ’81 to lead several workshops in life casting. Kravetz spent 20 years with LA Opera as the assistant wig master, mask maker and principal makeup artist. She now has a studio in Cummington, Mass., where she builds original and commissioned sculpture and masks.

A theater major at Williams, Kravetz taught Brothers’ students how to take castings and make molds of hands, faces and heads. She then brought the molds back to her studio and sculpted the heads for the play. Because this was the first staging of Waxworks, the group encountered some challenges along the way.

“It was a work in progress,” Kravetz says. “The play originally called for a bust of one character, but as the cast started running through the scenes, they realized it should just be a head. I had to decapitate one of my sculptures, which was actually right in the spirit of the play.”

The heads of characters were used as props in Waxworks, so student actors served as models during the casting workshops. Says Harold E. Theurer ’17, who played Maximillien de Robespierre, an influential figure in the revolution who ultimately was beheaded: “Once the mixture was applied over my eyes, ears and mouth, I sat still for more than an hour, unable to speak, see, hear or move my upper body. Yet I found the process surprisingly tranquil.”

Omar Gouda ’16, who was enrolled in Brothers’ class and also played the role of Curtius, says the workshops not only gave him practical experience in life casting but also enhanced his acting.

“The majority of my dialogue was about teaching Marie about wax,” says Gouda, a Japanese and theater double major. “It would have felt disingenuous to have no experience with that myself.”

Waxworks was written by Canadian playwright Trina Davies and won the Alberta Playwrights Network Award for best new play in 2007. It came to Williams via visiting lecturer in theater Kristen van Ginhoven, founder of WAM Theatre in Lee, Mass., which hosted a reading of the play in 2014.