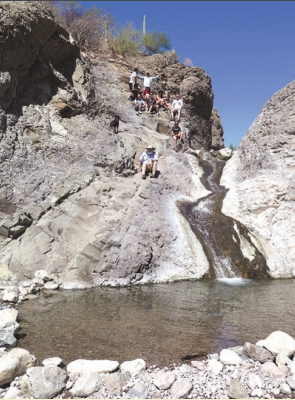 A waterfall near Rancho San Telmo in the foothills of the Sierra de la Gigante, located above the town of Loreto. Students traced the water shed that drains into the Loreto delta. Photo by Gudveig Baarli.

Spending two weeks in Baja California Sur, Mexico, brought into focus many of the things Christina Seeger ’16 was learning about in a spring semester tutorial on coastal ecosystems.

“I stood on a cliff and looked down at the island we’d spent the day exploring, and suddenly I could see everything we learned about so clearly,” says Seeger, a geosciences and astronomy double major. “The island was formed by a giant volcano, and I was able to construct the whole story about the eruption, the marine response and how the wind direction and what’s being swept in interacts with it all.”

The trip, which took place during spring break, was part of the tutorial Gulf of California Tectonics and Coastal Ecosystems, taught by Markes Johnson, the Charles L. MacMillan Professor of Natural Science, emeritus. In tutorials, pairs of students, guided by their professor, take turns developing their own independent work and critiquing their partner’s.

The 10 sophomores, juniors and seniors in Johnson’s class learned about the tectonics of the region and how the gulf formed. They also studied the region’s ecosystems, such as coral reefs and clam flats, both of which result in massive limestone formations along the coast.

During spring break, the students spent four nights camping on two of the islands in Loreto Bay National Park, where they encountered coral reef deposits on top of volcanic rock. The formation indicates that sea level is lower today than it was 125,000 years ago and that the island is rising over time.

The group then traveled 45 kilometers up the coast to study on foot and by kayak a span of coastline encompassing two bays that open onto the gulf from different directions. “No detailed geological map has ever been done on the area enclosed by the two bays,” says Johnson, adding that the students “made some fresh observations that clarified certain geological relationships in the area.”

Johnson has studied the ecology and tectonics of shorelines for many years. Earlier this year, he published his fourth book on the region: Gulf of California Coastal Ecology: Insights from the Present and Patterns from the Past (Sunbelt Publications).

For his students, the trip’s value was immeasurable. “Being in the field connects you to the material so much more than reading about it or looking at slides,” Seeger says. “It’s the best way to engage with the subject critically, because you’re standing right there, and your curiosity is naturally piqued.”