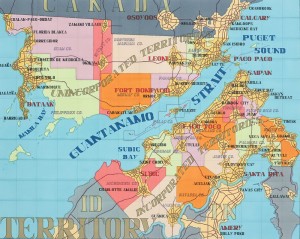 When psychology professor Mariko Moher wanted her students to consider how cognitive development influences the ways humans create and interpret art, she turned to the Williams College Museum of Art. With the help of Elizabeth Gallerani, curator of academic programs, Moher identified works that would speak to her class’s inquiry.

One piece in particular, a Lordy Rodriguez watercolor called Territory, caught students’ attention. In exploring the work, Moher’s students focused on how memory shapes representations of the world—an idea that might resonate for Rodriguez.

In an interview with Williams Magazine, Rodriguez says: “This body of work started from feeling nostalgic for home.” Born in the Philippines, he grew up in Texas but attended the School of Visual Arts in New York. He felt homesick one night and drew in his journal a map depicting Houston and New York “all mixed up and combined.” With that first map, and those that followed, he imagined “that I still went to my college but was close enough to live at home and see my old friends.”

As his horizons expanded, the maps did, too. In the America Series, of which Territory is a part, Rodriguez reconstructs the United States based on his own history and heritage, charting a critique of American policy and culture. Territory includes the names of towns, cities and regions derived from places the U.S. has occupied.

“American identity … is heavily influenced by the introduction and sharing of cultural memes with immigrant identities,” he says. “This implies a voluntary commingling. But when a country or culture is occupied by a sovereign nation like the U.S., the appropriation of an occupied culture has a different aspect to it, which this piece tries to address.”

For Moher and her class, Territory also helped illuminate the inner landscape. “Just as two people who experienced the same event may remember things differently, that may also impact our representations of space,” Moher says. “You can see how somebody’s experiences can and do change their memories or representations of the world.”