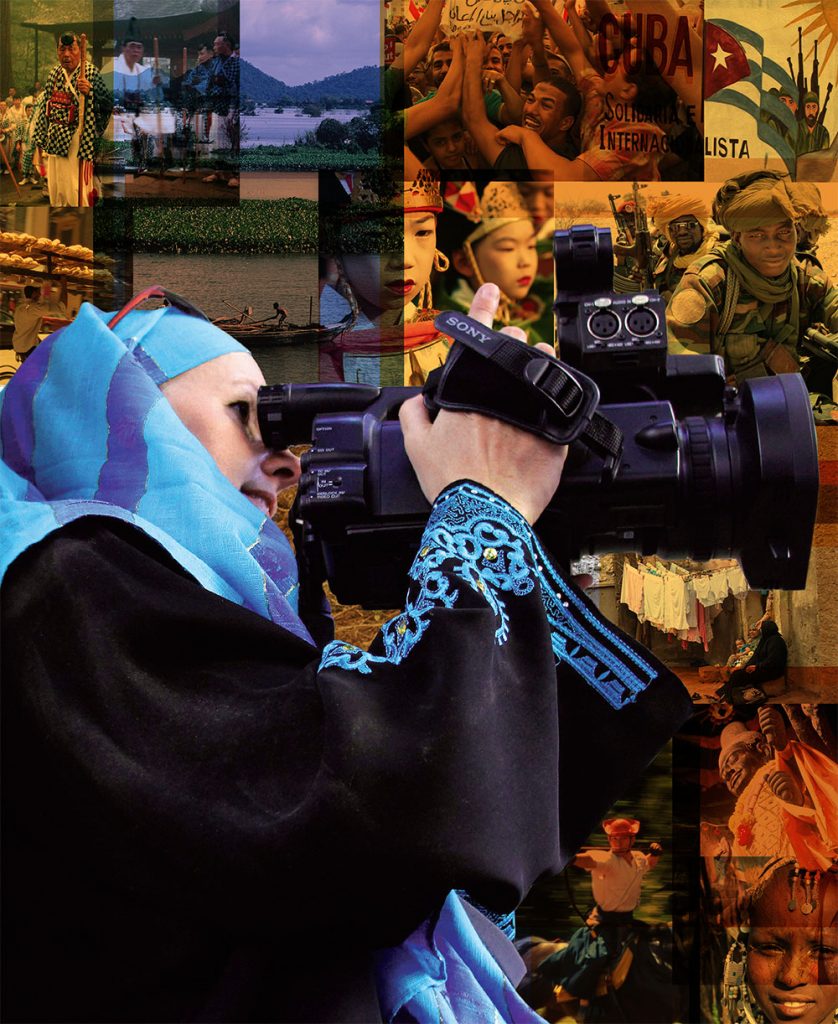 Citizen of the World

Three years ago, documentary filmmaker Karin Muller ’87 was traveling solo through Egypt. With her Sony PMW- 200 camcorder in hand and 60 pounds of equipment and supplies on her back, she spent three months living among Nile fishermen, Bedouin nomads and garbage collectors, capturing their everyday lives. That summer she visited Cairo, where she gathered in Tahrir Square with half a million people calling for the resignation of President Mohamed Morsi. Then she traveled to a small community that hadn’t seen an outsider in 20 years. There, as she walked through the village center wearing a hijab, a man yelled out a single word that almost ended her life.“Spy!”

Within moments, dozens of villagers surrounded Muller, shoving, kicking and hitting her. She took shelter under the back fender of a parked car, knowing she wouldn’t be able to survive the onslaught much longer. That’s when she spotted a woman standing nearby in an open doorway. Muller emerged from her hiding place and scrambled past the woman, who locked the door behind them once they were safely inside.

In nearly three decades making films, Muller has logged some perilous and impressive journeys. She hiked the Ho Chi Minh Trail in Vietnam and trekked 4,000 miles of the Inca Road between Quito, Ecuador, and Santiago, Chile. She lived with pre-Buddhist mountain ascetics in Japan, traced her family heritage through Tanzania and hitchhiked through Cuba. Viewers of her many PBS and National Geographic Channel series and readers of her books and articles have joined her on these expeditions from the safety of their homes.

Her most recent adventures are documented in Egypt: Beyond the Pyramids, which began airing on PBS stations in May. The series follows on the heels of Cuba’s Secret Side and Sudan’s Secret Side, which premiered on PBS in 2013 and 2014, respectively, and are now available on DVD.

“The secret side,” Muller says, “is the human side.” She’s captivated by the gritty reality of a place and its inhabitants, whose lives go mostly unnoticed. And she’s driven by an insatiable desire for learning sparked at Williams.

Born in Switzerland, Muller traveled frequently as a child. Her father was Swiss, and his work with the pharmaceutical company HoffmannLa Roche took them around the globe. Her mother, an African-born doctor, had a passion for language and culture.

The family lived in the U.S. and Puerto Rico for a time and then moved to Australia, where Muller attended high school and enrolled in veterinary school. Then her father was offered an opportunity to relocate to the company’s U.S. offices, and he returned from a business trip with a suitcase full of college and university brochures. One application was for Williams.

Muller visited the campus and made her decision almost instantly. “Williams was so beautiful,” she says. “Those buildings said learning and knowledge. We cut the college tour short.”

Muller, who now lives in California, likens her Williams education to standing in front of a fire hose of knowledge. The economics major often audited courses in addition to her major and general requirements.

“When I look at my career now, there isn’t a single course I haven’t used,” she says. “I absolutely could not do what I do without that broad liberal arts education, which essentially prepares you for everything because it prepares you to think.”

Muller joined the Peace Corps right out of college, spending two years on a remote island in the Philippines. She returned home to a management-consulting job and immediately regretted being tied to an office. She started a small company of her own, sold it not long afterward, and used her savings to follow her dream of becoming a travel writer. Muller chose Vietnam as her first assignment, writing a book about her journey and shooting some footage along the way.

“She’s not the kind of person who will fly into a land and book into the Hilton.  She’d rather get off the plane and make her way right into the slums of Cairo.” Lewis Williams, Muller’s agent 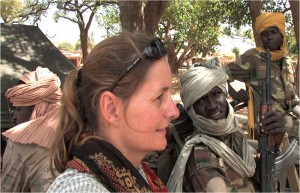 She took a film editing class at Rochester Institute of Technology and created a demo that she sent to 27 PBS stations. One of her tapes made it to the desk of David Fanning, founder of PBS’s FRONTLINE, at Boston’s WGBH. “He agreed to executive produce my Vietnam footage and got PBS to pay for the editor and air it as a one-hour special,” she says. “It was re-airing on PBS at 1 a.m., when the director of the newly created National Geographic Explorers grant program, who is an insomniac, saw it and called me.”

The director encouraged her to apply for the grant, which she received and used to produce another travel series and companion book for National Geographic. It gave her the confidence and experience to begin doing them on her own. Today, what sets Muller’s documentaries apart is her deep immersion into completely foreign communities and cultures. “She’s not the kind of person who will fly into a land and book into the Hilton,” says her agent, Lewis Williams. “She’d rather get off the plane and make her way right into the slums of Cairo.” Her intimate storytelling—often from the point of view of the subject—also distinguishes her work. “You can see on the screen that people really trust her,” says Tracy Beckett, director of program and media acquisitions for PBS International. “At first, the locals are at arms’ length, but then they’re closer to her and warming to the camera.” In part, that’s because Muller speaks their language. She’s fluent in French, German, Spanish and Tagalog. She says her Arabic, Japanese, Swahili and Vietnamese would improve with more regular use. She’s also set out to learn what she calls “barterable skills” that can connect her to the people she covers. When she’s not traveling, Muller regularly takes automotive technician classes. Not only is she prepared when the vehicle she’s driving in inevitably breaks down miles from nowhere, but her auto repair abilities also have helped her out of some sticky situations. 30 l WILLIAMS MAGAZINE “If you’re stopped at a roadblock, or if there’s a chance that you might be taken hostage, there’s that moment when you realize you’re in serious trouble,” she says. But as she’s found in countries in the Middle East, “I just say in Arabic, ‘Allah sent me to fix your trucks.’ They always have broken-down trucks.” She also took break-dancing lessons after learning that North African teenage boys, in particular, love rap music and break dancing—or their versions of them.

“My goal,” Muller says, “was to develop a 20-second routine I could do on sand so if I ran into that situation I could turn ‘Let’s shoot her’ into ‘Wow, that’s really cool.’” Luckily, she’s never had to demonstrate her skills. 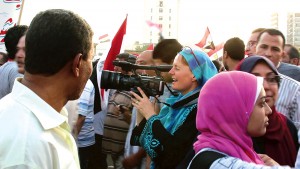 Muller also has two black belts in martial arts and knows how to box. But when overwhelmed by the mob in Egypt, she relied on instinct. “If it’s you against three people and they have you surrounded, you’re done,” she says. “Within 20 seconds, there were 20 people. And at that point, nothing you have prepared can help, really.” To this day, she’s not sure why the woman in the doorway let her go by, but Muller remembers feeling overwhelmed with gratitude. She hid in the woman’s home for several hours before the police took her into custody. They held her for 10 hours, releasing her only after the family she was staying with in the village intervened on her behalf. “I had broken ribs, I had internal injuries, I was throwing up and losing my vision from a blow to the head,” she says. She called her mother, a retired general practitioner, who arranged for her to have surgery. About two weeks later Muller was back home in California to undergo an operation to repair her damaged spinal cord. After six months of rehabilitation, she is almost fully recovered.

“You can see on the screen that people really trust her.  At first, the locals are at arms’ length, but then they’re closer to her and warming to the camera.” Tracy Beckett, PBS International

“I’m biking, surfing, playing on a water polo team,” she says. “I have just enough permanent damage to remind me I’m mortal.” In spite of what happened in Egypt, Muller says absolutely she would do it again, though she’s promised to stay out of the Middle East while her mother is still alive. She’s already planning her next project—one that will keep her in North America, with a population unlike any she’s studied before: domestically raised wolves that she plans to trek with in the wild. Thousands of captive wolves and wolf-dog hybrids are abandoned, rescued or euthanized each year when people who raise them as pets realize they’re unable to provide for their needs. Few facilities in the U.S. and Canada can accommodate the unwanted animals, and those that can are overcrowded. The logistics of the project boggle the mind. How do you provide for wolves’ dietary needs—five to seven pounds of meat a day—when they don’t know how to hunt? How do you teach them to be wary of humans? And how do you know they won’t run away at the first taste of freedom? “The project itself has an awful lot of unanswered questions,” Muller says. “But solving these problems and issues is no different from going to China and saying, ‘I’m going to try to get inside families. I’m going to get up in the Tibetan Himalayas. I’m going to try to figure out the difference between coastal Chinese culture, modern and traditional.’” The many issues associated with the wolf project have inspired a new chapter in Muller’s career. She’s developing a crowdsourcing platform that might help her find answers to her questions. She’s already secured the funding for the site, CrowdSolveIt.org, which is due to go live in the fall and will allow anyone with a humanitarian project to seek information and expert advice to support his or her work. “It’s a Kickstarter for ideas,” Muller says. “So I, as an innovator, would put the wolf trek on this platform and lay out all the issues I had not yet resolved.” Instead of donating money, as people do for Kickstarter or GoFundMe projects, the public would answer her questions and offer expertise. “They are crowd solvers,” Muller says. “Our goal is to give social entrepreneurs access to the collective intelligence and experience of a vast number of users in order to solve complex problems.” 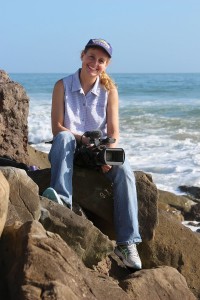 The platform is a natural extension of the nonprofit she already operates called Take 2: The Student’s Point of View, which helps elementary- through college-aged students develop global citizenship and leadership skills. Through the website take2videos.org, Muller shares the raw footage from her documentaries, which the students can edit to create their own documentaries and presentations on subjects including politics, environmental science and social justice.

The goal of Take 2—and of all her work—is to share insight into how other people live and cultivate “global citizenship, empathy, compassion, understanding,” Muller says.

“I’m the happiest person I know,” she says. “I will do this for the rest of my life.”

Denise DiFulco is a freelance writer based in New Jersey.