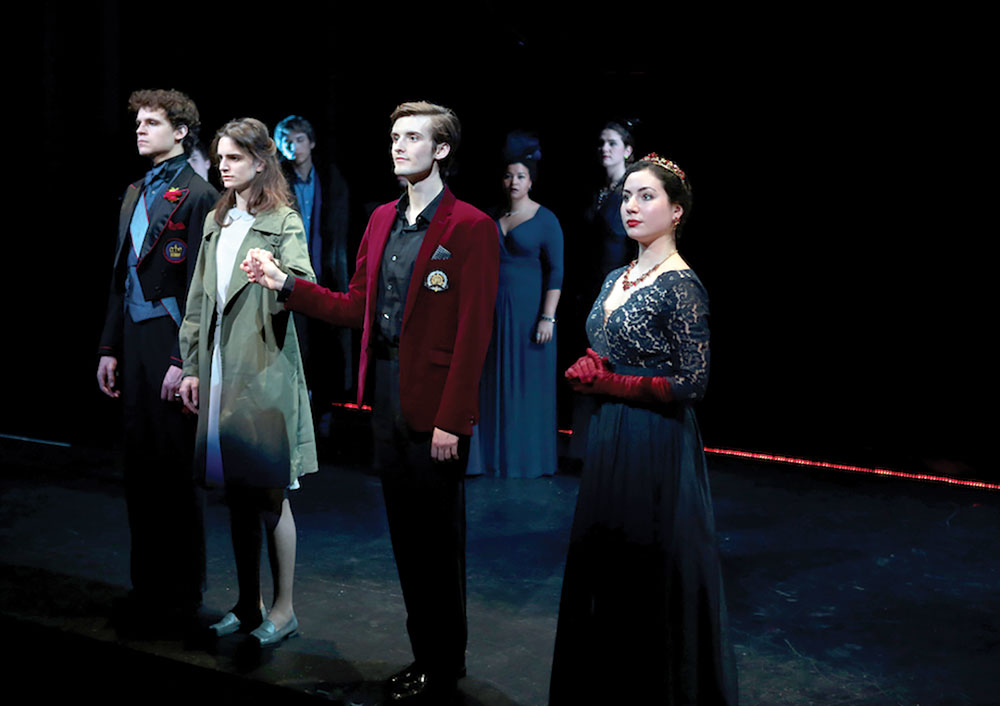 The play, by Polish writer Witold Gombrowicz, is a tragicomedy that challenges societal expectations. “It’s a story about a simple human being who is trying to fit in,” says Sangare. “The play is timeless and universal because it asks questions about identity and how we value individuals in a society.”

When Sangare announced his off-Broadway plans, which were funded by the Consulate General of Poland in New York City, students from the original cast jumped at the chance to sign up. “It’s so rare to revisit a character, and I knew this was an opportunity not to miss,” says Carina Zox ’16, a theater major who played Queen Margaret. “Margaret was much more real to me the second time, and my work became about bringing more of myself into her character.”

The group spent the first week of Winter Study rehearsing at Williams. As in March, the sessions included choreography work with performers from the world-renowned German dance company Tanztheater Wuppertal-Pina Bausch. They also spent long hours re-imagining the characters they’d come to know last spring. They then traveled to New York and reconnected with sound designer Stephen Simalchik ’13, whose work on the Theatre Row production reviewers called “haunting.”

The 18 student members of the cast and crew spent the next week at the Clurman Theatre, with which Sangare has enjoyed a close relationship since founding the United Solo Festival there in 2010. The biggest adjustment the cast faced was the size of the house. “In Theatre Row, there is only about a foot between the edge of the stage and the first row in the audience, so it feels very intimate,” says David Carter ’16, a political economy major who’s taken theater classes since his freshman year, when he auditioned for a play on a whim and found he loved the experience.

Petra Mijanovic ’16, a French major who played the title role, found feedback from the Theatre Row audience to be useful. “While I revised Ivona by relying on a thorough knowledge of the previous performance,” she says, “I found that in the laughter and sometimes the confusion and silence of the audience, I was able to refine my work even more.”

The show was slated for two performances that quickly sold out. So a third show was added. The experience was both exhausting and exhilarating, according to the students, who say they gained important understanding about acting. “I learned to take physical and emotional risks,” says Zox. “That’s something I’ll take with me wherever I go next.”
—Julia Munemo